I signed up with TalkTalk on the 18 March 2010 for there up to 24 meg service. The speed I might get was the first thing that got me, then the monthly price of £18.99. This included the phone and free internet.
About 3 weeks passed when I recieved a letter from TalkTalk saying an engineer would be around on the 1st June 2010 ( yes that's right ). I called them and got the date moved up which was set for 1st April 2010. No problem as I was using T-mobile USB.
The engineer came out on said day and plugged his equipment in and went to do his bit in the box on the street. He came back after a while and plugged another little machine in and did whatever he did. Then proceeded to go to each extention socket and test them. He said all was fine and my TalkTalk phone was now active. He gave me the number for that. In one of the letters I recieved from TalkTalk they said I would recieve my router and welcome pack within 21 days. 21 days came and went, so I called up and enquired. The answer I got was unfortunately there was no more space in the exchange for me to have the service I signed up for and if I wanted broadband I had to pay an extra £15 a month but was promised that if space became available I was in the cue for it and would be switched over. I should have run then but took what they were offering. May and June I had smooth broadband at just over 9meg. Then at the end of June I recieved a letter saying that equipment wuould be upgraded and on the 8th July I would be switched over to upto 24meg service I had signed up for. They said I would not even notice the switch over.

Well come the 8th I sure did notice as I had no internet. I called but got passed from one person to the next at times some were even saying I have no contract for broadband but only phone.
Eventually by yesterday morning around 1aam I was up and running, but the whole day I kept going offline. Many calls to TalkTalk and they kept trying to tell me the fault was on my side. First trying to say I must be doing something wrong with the router. Then telling me it must be faulty wiring in my sockets. I had a friend come over (electrician) and plug his little machines in and test all the sockets. He passed them all and went and faxed the report off to TalkTalk. They then went and tested the line and everything on their side. Eventualy I got connected again, but every hour or so I loose connection.

To add insult to this all the service I signed upt was for upto 24 meg LLU. I wsn't expecting to get massive speeds, but wasn't expecting my speed to actually drop. Now I am getting just over 5meg.

In my opinion I think something is wrong with things on TalkTalk side, but they are just not having any of it.
I am stuck in a hole now for the next 12 months

Sorry to hear your less-than-happy experiences with TT Evan, it all sounds pretty frustrating, to say the least.

If you haven't already done so, it might be worth signing up to Talk-Talk's own Members Forum. I see they have an Online Community Manager who is active on the boards, (there is currently a "sticky" where he is asking for some feedback from customers re: slow speeds.

Hope you can get some help and things will improve for you very soon.

Can you post your line stats from your router? Are you connected to the test socket?


Take a look at this link http://www.kitz.co.uk/adsl/troubleshooting.htm

Can you post your line stats from your router? Are you connected to the test socket?


Take a look at this link http://www.kitz.co.uk/adsl/troubleshooting.htm
Click to expand...

Here are the line stats. I had a look at your link and like I said everything has been tested. The guy/friend that did it for me is a BT/OpenReach Electrician/Engineer and he says there is no fault at my side. At the moment I am connected via one of the extention sockets. I did have the router plugged into TEst socket while TT were checking the line etc, it made no difference. The test socket is also inside a cupboard which houses all kinds of electrical things related to my heating system and is far to warm a place to house a router permanently. 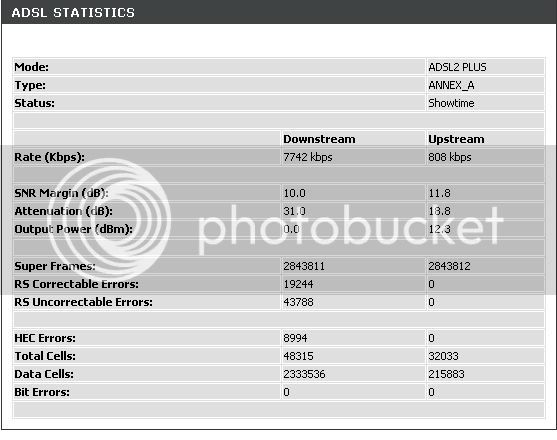 Thanks for your link Taffycat. I shall be signing up with them today. Just did a speed test and it seems to be up today. But also noticed my phone is very very poor quality now.
G

EvanDavis said:
Thanks for your link Taffycat. I shall be signing up with them today. Just did a speed test and it seems to be up today. But also noticed my phone is very very poor quality now.
Click to expand...

When you do a quiet line test through 17070 option 2 can you hear any hissing, cracking ? If you can then try a corded phone direct into the test socket if that still hisses or crackles then most likely you have a fault on your line which could also be effecting the broadband speed.
Ad

Talktalk got a pounding on BBC's Watchdog a few years ago for poor service & customer support, we were with them for a while before switching over to Sky.

wizkid said:
When you do a quiet line test through 17070 option 2 can you hear any hissing, cracking ? If you can then try a corded phone direct into the test socket if that still hisses or crackles then most likely you have a fault on your line which could also be effecting the broadband speed.
Click to expand...

Did the test as said and the line is crystal clear. I am going to call them up tomorrow and see about getting the testing pushed up to the next level. If it costs me then so be it. I'm sure I will find a way out of paying for it.

feckit said:
Talktalk got a pounding on BBC's Watchdog a few years ago for poor service & customer support, we were with them for a while before switching over to Sky.
Click to expand...

Feckit without this coming across wrong. The most frustrating thing for me through all the calls has been the extremely poor command of English. I constantly had to ask if they could repeat themselves. Twice I asked if I could speak to an English operator and the answer I got was " I am speaking English " And to think the call center is somewhere in West London. Shocking that's all I can say.
A

With Sky we asked to be put through to their Scottish Call Centre.
Only ever rung them up twice and that was because we had some teething problem with the router & wireless connection security & all sorted out quickly.

I know it does not help you but talktalk do get some stick for their poor service which you are now finding out about now!! See what help you can get from their forum.

As for speed of the internet we got told the other day from a salesman on the high street they could offer us 24MB with no problem even though he did not know our exchange!! Due to the distance we are from the exchange & waiting for BT to upgrade it the most we can get at the moment is 8MB currently.

Thats more than enough from what we use it for!!!

Good luck & keep us all posted on how you get on!

Quick update. I was on the phone to TT tech support for what seemed to be an eternity today. The support was pushed up another level and they did some more testing on their side. I was without internet for about 2 hours while they did this. Received a phone call shortly after to say I would be up and running within an hour. Tech support couldn't apologize enough as the fault was on their side. Since going live again everything is running fine with no drop offs again. They are also going to investigate now why I am only getting around 7meg on an up to 24meg line, considering I live within 500 meters of the exchange. So I will wait and see what happens there then. Not that I am complaining with what I have got now.

Glad to hear TT are being helpful Evan

It's good that they have been able to establish what the problem is. Hope you will continue to see a big improvement.

Taffycat said:
Glad to hear TT are being helpful Evan

It's good that they have been able to establish what the problem is. Hope you will continue to see a big improvement.

Thanks Taffycat. I have been reading some of the stories that others have posted on the TT forum.
My story seems mild in comparison to theirs.

EvanDavis said:
I have been reading some of the stories that others have posted on the TT forum.
My story seems mild in comparison to theirs.


Yeah, I keep hearing lots of horror stories about TT but I must say that in the 2 and a half years I have used their broadband I've had no problems whatsoever. I had their telephone package initially and was happy to try their broadband at only £6.50 per month when I needed it.

I seem to be the lucky one.

nivrip said:
I seem to be the lucky one.

Can I have some of your luck please ?
I did a speedtest this morning around 8:30am which showed I was getting about 15meg. I was quite chuffed as this was quite a jump from the 7 - 9 meg as before. Just did another test using the link the TT forum provides and this is the result. Speedtest.net shows much the same. 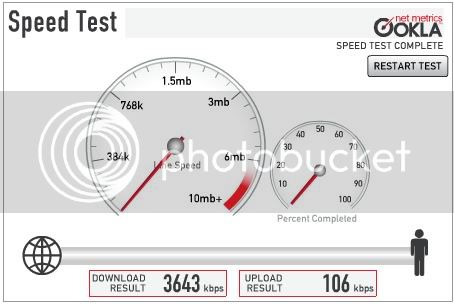