It's hard to beat Israeli technology

How simple and effective! This is common sense, people!

The Israelis are developing an airport security device that eliminates the privacy concerns that come with full-body scanners.

It's an armoured booth you step into that will not X-ray you, but will detonate any explosive device you may have on your person.

Israel sees this as a win-win situation for everyone, with none of this crap about racial profiling.

It will also eliminate the costs of long and expensive trials.

You're in the airport terminal and you hear a muffled explosion.

"Attention to all standby passengers,

El Al is pleased to announce a seat available on flight 670 to London . 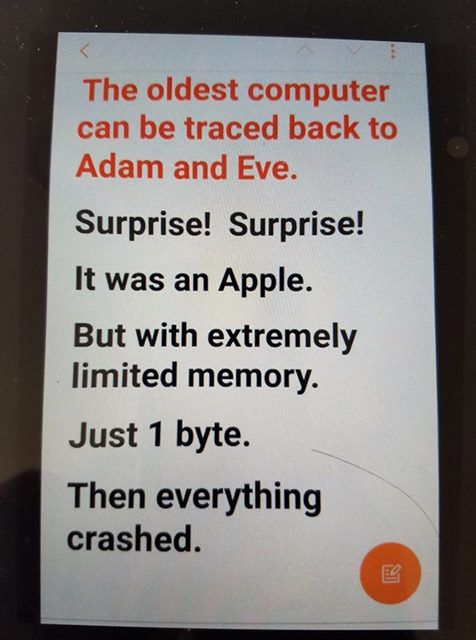 Daughter: I got an A in Chemistry.

Daughter: Mom, what do you think WTF means?

Son: I don’t know, love you, talk to you later.

Mom: OK, I will ask your sister. 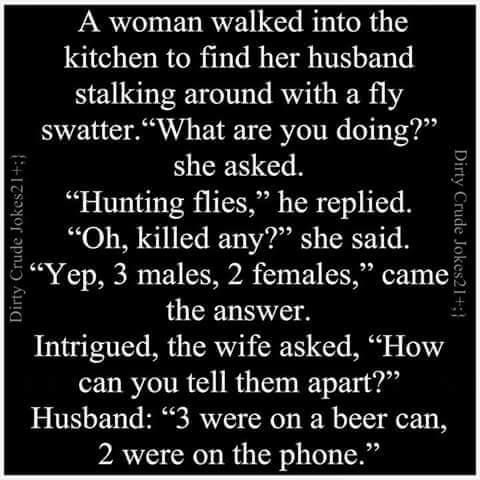 
A photographer up t'hi street advertised that he could retouch photographs.
So in walks this woman with a picture of 'er departed husband.
I'd like this 'eer photo retouched, and while yer at it remove his 'at. I nivver did like that 'at.
Aye said t'photographer chap. Now just before you go missus I must know which side he parted his hair.
E by gum lad, you must think I am reight daft, you'll find that out when you take his 'at off.

A biker was riding along a California beach when suddenly the sky clouded above his head and, in a booming voice, the Lord said, “Because you have TRIED to be faithful to me in all ways, I will grant you one wish.” The biker pulled over and said, “Build a bridge to Hawaii so I can ride over anytime I want.”

The Lord said, “Your request is materialistic. Think of the enormous challenges for that kind of undertaking. The supports required to reach the bottom of the Pacific! The concrete and steel it would take! It will nearly exhaust several natural resources. I can do it, but it is hard for Me to justify your desire for worldly things. Take a little more time and think of something that could possibly help mankind.”

The biker thought about it for a long time Finally he said, “Lord, I wish that I and all men could understand our wives. I want to know how she feels inside, what she’s thinking when she gives me the silent treatment, why she cries, what she means when she says nothing’s wrong, and how I can make a woman truly happy.”

The Lord replied, “You want two lanes or four on that bridge?."

Even the Lord Almighty has issues understanding them, why do you think he went ahead with the bridge?

Text message from father to so

Today is a day you will treasure for all the days of your life.

My best love and good wishes,

Thanks Dad. But the wedding isn’t actually until tomorrow.

I talked to a homeless man this morning and asked him how he ended up this way.

He said, "Up until last week, I still had it all. I had plenty to eat, my clothes were washed and pressed, I had a roof over my head, I had TV and Internet, and I went to the gym, the pool, and the library.
I was working on my MBA online. I had no bills and no debt. I even had full medical and dental coverage."

I felt sorry for him, so I asked, "What happened? Drugs? Alcohol? Divorce?"

Kim Jong-Un announced at a news conference that North Korea would be sending a man to the sun within ten years!
A reporter said - "But the sun is too hot. How can your man land on the sun?”
There was a stunned silence. Nobody knew how to react.
Kim Jong-Un quietly answered "We will land at night”.
The gathering and everyone in North Korea watching on television broke into thunderous applause.

Back in Washington, Donald Trump and his entourage were watching the news conference
When Trump heard what Kim said, he sneered - "What an idiot. Everybody knows there’s no sun at night.”
His cabinet and everyone working in the White House broke into thunderous applause.

Murphy applied for a forklift job at a famous Irish firm based in Dublin.


A Norwegian applied for the same job and since both applicants had similar qualifications, they were asked to take a test and led to a quiet room with no interruptions by the Manager.


The manager went to Murphy and said, "Thank you for coming to the interview, but we've decided to give the Norwegian the job."


Murphy,... "And why would you be doing that? We both got 19 questions correct. This being Ireland and me being Irish surely I should get the job."


Manager, "We have made our decision not on the correct answers, but on the question you got wrong."


Murphy, "And just how would one incorrect answer be better than another?


Manager "That's simple; on question number 7 the Norwegian wrote down,


Young King Arthur was ambushed and imprisoned by the Monarch of a neighbouring kingdom. The Monarch could have killed him but was moved by Arthur's youth and ideals. So, the Monarch offered him his freedom, as long as he could answer a very difficult question. Arthur would have a year to figure out the answer and, if, after a year, he still had no answer, he would be put to death.

The question?...What do women really want? Such a question would perplex even the most knowledgeable man, and to young Arthur, it seemed an impossible query. But, since it was better than death, he accepted the Monarch's proposition to have an answer by year's end.

He returned to his kingdom and began to poll everyone: the Princess, the Priests, the wise men and even the Court Jester. He spoke with everyone, but no one could give him a satisfactory answer.

Many people advised him to consult the old Ugly Woman, for only she would have the answer.

But the price would be high; as the woman was famous throughout the kingdom for the exorbitant prices she charged.

The last day of the year arrived and Arthur had no choice but to talk to the old woman. She agreed to answer the question, but he would have to agree to her price first.

The old Ugly Woman wanted to marry Sir Lancelot, the most noble of the Knights of the Round Table and Arthur's closest friend!

Young Arthur was horrified. She was hunchbacked and hideous, had only one tooth, smelled like sewage, made obscene noises, etc. He had never encountered such a repugnant creature in all his life.

He refused to force his friend to marry her and endure such a terrible burden; but Lancelot, learning of the proposal, spoke with Arthur.

He said nothing was too big of a sacrifice compared to Arthur's life and the preservation of the Round Table.

Hence, a wedding was proclaimed and the woman answered Arthur's question thus:

What a woman really wants, she answered....is to be in charge of her own life.

Everyone in the kingdom instantly knew that the woman had uttered a great truth and that Arthur's life would be spared.

And so it was, the neighbouring Monarch granted Arthur his freedom and Lancelot and the Ugly Woman had a wonderful wedding.

The honeymoon hour approached and Lancelot, steeling himself for a horrific experience, entered the bedroom. But, what a sight awaited him. The most beautiful woman he had ever seen lay before him on the bed. The astounded Lancelot asked what had happened.

The young beauty replied that since he had been so kind to her when she appeared ugly, she would henceforth, be her horrible deformed self only half the time and the beautiful maiden the other half.

Which would he prefer? Beautiful during the day....or night?

What would YOU do?

What Lancelot chose is below.

BUT....make YOUR choice before you scroll down below.


Noble Lancelot said that he would allow HER to make the choice herself.

Upon hearing this, she announced that she would be beautiful all the time because he had respected her enough to let her be in charge of her own life.

Now....what is the moral to this story?

Things are going to get ugly...
Ad

A man was sitting reading his papers when his wife hit him round the head with a frying pan. 'What was that for?' the man asked. The wife replied 'That was for the piece of paper with the name Jenny on it that I found in your pants pocket'.

The man then said 'When I was at the races last week , Jenny was the name of the horse I bet on 'The wife apologized and went on with the housework.

Three days later the man is watching TV when his wife bashes him on the head with an even bigger frying pan, knocking him unconscious. Upon re-gaining consciousness the man asked why she had hit again. Wife replied. 'Your horse phoned'
You must log in or register to reply here.