A lot of people see music as one of the most important parts of their lives. Music can affect your moods quite wildly. Heighten your happiness, and even make your lows even despairingly more so. So with music being one of life’s priorities, you’d expect people to be more than happy to splash the cash when it comes to picking up speakers for their home use. But how many people do you know who are happy to stick with the old pair of £5 speakers that came with their PC? It’s a shockingly high percentage indeed. 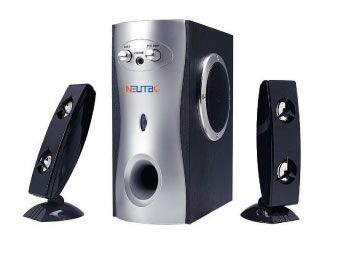 Neutac released a 2.1 Wooden Woofer System for those of you on a tight budget. Retailing at less than £15, this nice looking little system is perfectly at home either plugged into your PC, your console, or your MP3 player. With a nice black wooden woofer, with a silver plastic front (complete with blue LED decoration) you’re looking at quite an attractive unit. The small black satellite speakers two are particular minimal and stylish too.

The first thing you’ll notice feature wise is the sheer amount of use you can out of this little piece of kit. With so many different options, and ways to hook up to your favourite household electronic items, it’s a bit of a jack of all trades. The front access bass and volume control is always nice to see too. Even the small blue LED light at the front of the unit which lights up once you flick the power switch at the back of the woofer looks quite stylish indeed.


The two satellite speakers themselves are incredibly small indeed. For those working in a pretty tight space, they’re going to be a huge plus, and a push towards a purchase. They do both look quite cheap and plastic, but it’s all down to the performance. The headphone jack that’s also situated at the front makes late night listening an easy thing to do. Just plug your headphones in, and away you go.

For £15, what can you really expect from a small 2.1 system? A tinny sound? A lack of deep bass? Unclear sounds? Well, luckily enough the S21114 pretty much misses out on all three. The built-in Amplifier, and bass control mean that you can set the standard with great precision. Testing the unit with a wide range of music, the woofer only really wobbled when long periods of deep bass were present. You might not know the track, but the song Deep Pile Dreams by Ian Brown showed off this little wobble quite perfectly. At high volume levels this particular little wobble made a more ready appearance, but we’re talking stupidly high volume levels that very few of you indeed will want to utilise.

Despite the price, we were quite delighted to find that there’s a supreme lack of any kind of tinny sound which you’d usually expect. Using the track ‘Trans-Atlantic Drawl’ by Radiohead (a b-side of the Pyramid Song single fact fans!) as a bit of a benchmark, the song itself sounded very impressive indeed. The opening half which features an abundance of screaming guitars sounded not too far from the sound you’d expect from a much more expensive set, with no drop out whatsoever.

Using the unit as a speaker kit for your consoles also works particularly well. The 2.1 sound eclipsing the performance from most standard televisions. Using this with your DVD player is where it begins to struggle however. With the vast majority of us now used to surround sound, the overall quality just isn’t up to par, and certainly detracts from your film watching experience.

There’s obscenely little to criticise the S21114 when you take it simply as it is. As a budget system to hook up to your PC, your game consoles, or even your MP3 player it performs slightly better than expected. Obviously it doesn’t perform to the levels that true audiophiles would want, but anyone looking for a cheap step up from a basic pair of speakers, you could do much worse than pick this unit up.

The small size of the entire set overall makes it a big plus to those with a particularly small amount of space. Especially as the performance most certainly outweighs the financial outlay.