There once was a time when gaming was quick and simple. When all you needed was the basic knowledge of which action the two buttons performed, and you'd be well on your way to racking up those scores consisting of a stream of integers. In current times however we've all been much more eager to obtain more and more realism with each gaming generation. The 3D generation in particular saw the leap away from simplicity, and through to a complicated, over-worked mess.

Each progression in each genre seems to add something new. Something that requires yet another button press to progress through a game. Something that tries to wickedly contort your fingers as you attempt to press numerous keys/buttons at the same time. Then there are the added realistic lighting effects, and the inclusion of a new physics engine that sees bodies twist in unimaginable ways.

But there are some out there who seem intent on ‘keeping it real'. Reminding us that bigger and flashier truly isn't always better. Introversion Software first came to the world's attention with Uplink, a title which gave you the opportunity to live out the life of a hardcore hacker. Giving you a basic and simplistic interface, this game became a major cult classic and a favourite for all those who we're lucky enough to lay there hands on a copy. And enough copies were sold in fact to fund the development of their next project, Darwinia. 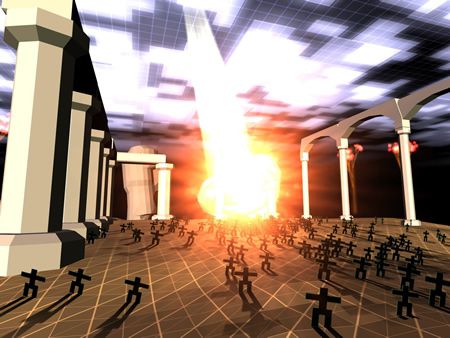 The first thing you'll notice with Darwinia are the astonishing graphics. Harkening back to a simpler time, the aesthetics lack all the detailed textures, and millions of polygons that all recent titles seemingly need to make use of. The best way of getting across the truly unique graphical settings is to look around at the various screenshots around this very review. This is one truly stunning game to look at. While rough, angular edges are the bugbear of many a developer's life, here they're the meat and drink of what is a sheer aesthetic treat.

This simplistic set of visuals hides a quite difficult game to explain away in a handful of sentences. The most obvious relative when it comes to the control system would be that old classic, Cannon Fodder. Utilising your left mouse button to move around, and the right to unleash a volley of fire. But Darwinia has much more depth than this likening can show. Actually finding yourself with units to control requires you to instigate various programs, utilising the task manger to draw various gestures. In game action really does merely consist of predominantly utilising the mouse gesture system to create your required units, and simply pointing and clicking the direction in which to move and fire.

In a slight change from the norm (if you liken Darwinia to a traditional real time strategy title) you don't select your enemy to fire upon and leave it at that. Instead you're required to aim with the mouse, and right click for each volley of fire you wish to unleash. It's yet another unique plus point for Darwinia and Introversion Software. 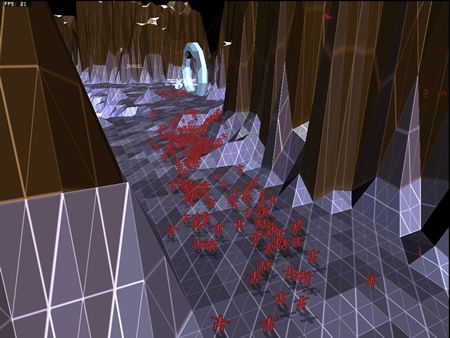 However the RTS beginnings of Darwinia are shown in the guise of a quite unique style of resource collecting. When anyone (or anything) dies, it leaves behind a ‘soul'. Using your engineer units, you can recover these souls and transform into one of those little green Darwinians. Missions again show off the RTS routes, but with a whole abundance of differing mission objectives, most of which you're much better at discovering yourselves during play. A lot of missions require mainly pushing back the Virii forces, and making sure you keep a particular number of Darwinians safe. But there's a lot of innovation hidden away in there as you progress through the game.

The setting behind Darwinia is quite the masterpiece too. The basic storyline consists of a Dr Sepulveda who constructs a virtual theme park inhabited by a little green sentient evolving life form called the Darwinians. However, the systems of Darwinia are over-run by an evil viral infection, in the guise of little red Virii, and it's your task to push these evil forces back, and restore Darwinia to it's former glory. While it might sound initially moderately cliché, it's this technological twist to everything, combined with the unique aesthetics that brings about a truly new experience. 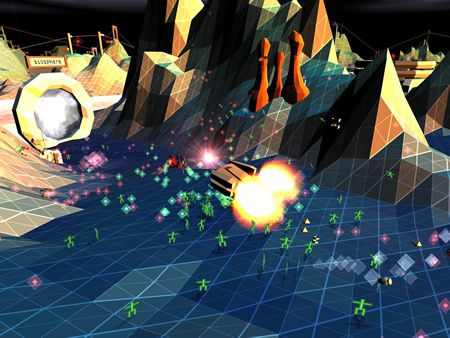 ​
Extra praise needs to given to the soundtrack behind the title. The opening sequence of the game in particular is quite incredible, dma-sc (the mind behind that particular track) using simplistic synthesised tones to create what truly feels like the music that used to accompany may gaming titles, back in the day when most soundtracks weren't of the American pop-rock style that populates today's big budget behemoths. Each and every single piece of sound fits the game like a glove, combining with the graphics so eloquently which makes us wonder just why so few other developers seem able to manage it with such aplomb.

It's the fact that there's so little to Darwinia's detriment that makes it so essential. Introversion have shown that you don't need flashy realistic aesthetics, a high priced soundtrack, and a complicated mish-mash of button presses to give us gamers a truly wondrous and involving experience. There's an alarmingly few titles out there that can make you care for even the central character, but Darwinia leaves you dejected at every single little Darwinian that perishes. This is one game that simply has to be played.