Hopefully I’m not just speaking for myself when I say that I’d dearly loved to be remembered once my time of this earth is finally finished. Not just by my family and close friends of course, that’s a given. No, I want to be remembered by everyone around the globe, be they a massively overpaid director of an electronics superstore, or a geeky comic book seller. I want the memory of my actions to live on in people’s minds for generations to come, for numerous millennia, be it for the many good or evil deeds that I’ve performed. Well, at least that’s what I reckon the mind-sets of many of these discoverers of civilizations were. I’ll be more than happy to be remembered as that bloke who had a great time, and wrote some things that a few people found interesting and helpful. But now we’re beginning to get way too philosophical for a game review.

If you haven’t yet heard of the Civilization series, then as much of a cliché it may be to say, you really must have been living under a rock for the past decade. Ever since its first iteration way back in the Britpop era of the early 90’s, the Civilization games are among the very few games that have caused numerous break-ups, lost jobs and bleary all-nighters.

It is a simple premise for a video game too: Simply found a civilization, and over the course of numerous generations go from the humble beginnings of a simple small tribe to the world’s biggest super-power. Be it dominating by aggression, cultural might, or even becoming the first nation to head out into space towards Alpha Centauri. Of course, things aren’t quite as simple as merely building up your own empire in a free and easy manner. Other civilizations are eager to make their own stamp upon the world, each with their own specific agendas. 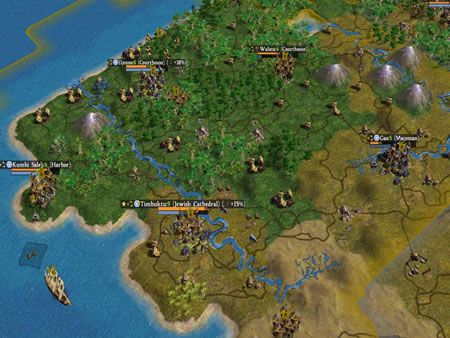 Taking in pretty much the entire span of human history, from the beginnings of the stone ages, right the way to the modern day world means that the way you shape your empire over the course of this vast number of years is vitally important to what kind of success you will eventually achieve. Winning a game of Civilization is oddly enough, probably one of the low points of the game, since it means that the relationships you’ve built up with various other civilizations, the cities you’ve created and built into huge sprawling metropolises have all got to be abandoned and things need to begin all over again. As I mentioned earlier, you can achieve victory in many different ways, be it culturally, via your mass armies, or simply due to the dazzling size of your empire. You can fully concentrate on which of these methods you wish to focus on right from the start, via either sending settler units far and wide to found new cities on your peoples behalf, or instead creating numerous powerful warrior units to rule with an iron fist. You can even build huge numbers of universities, giving your people vast knowledge to be the first to research future technologies in order to dominate with intelligence and cultural diversity. That is the main selling point of Civilization IV: it is all down to what you truly wish to do. Planning ahead can work in your favour quite considerably, especially when you work towards the two ideals that each civilization has bonuses for.

But even if you are as peaceful as they come, chances are at some point you will be required to defend yourself from brutal attacks. Thankfully this area of the Civilization titles, which has consistently been criticised, has been worked upon and tweaked quite considerably. Where there were once two separate ratings for each unit, defence and attack, there is now one combined rating, giving you a much clearer idea as to what units work well against others. Each has certain advantages and disadvantages in certain situations too, requiring you to create mixed forces, rather than merely churning out unit after unit of the most powerful unit (at least initially).
Another addition is the ‘special people’ who appear from time to time, whom you can use to give your civilization a timely boost in the guise of a new technology, or a cultural advance, or simply add them to a cities population and give a long term increase to it’s infrastructure. It’s a new tactical element that everyone’s play style will utilise in ever-so slightly different ways. 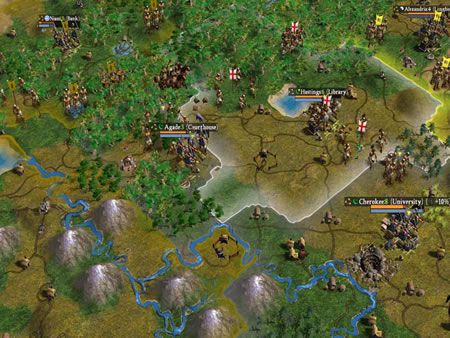 ​
Religion plays a much bigger part in this forth incarnation of the series. Founding a religion in one of your own cities gives it the title of the holy settlement of that religion. Then, as your religion spreads throughout the world, be it along trade routes, or as you sneakily send missionaries into other civilizations cities, other civilizations may pick up upon it and utilise it themselves. Now this can work in your favour in numerous ways. Being the founder of a religion that is used the world over can give you many advantages when it comes to making friends with the various other civilizations, giving you trade advantages, and the possibility of asking for various technologies as gifts. But, it can also work against you: if your borders clash with a more culturally happy set, then some of your people could be eager to switch allegiances, losing map space to your opponents, and perhaps even a city or two. It is easily noticeable that religion has had a particularly huge amount of work done to it; the depth you can go into dips to quite terrifyingly low levels.

The graphics too have had a huge amount of polish, with the world looking at even more visually dazzling place than before. The powerful new 3D engine (which runs well even on a quite lowly system) brings some quite beautiful animation, and some clean and well structured menus. Some icons, however, are a little too small for easy use, pushing you towards using the keyboard short-cuts. However, these become second nature in next to no time. 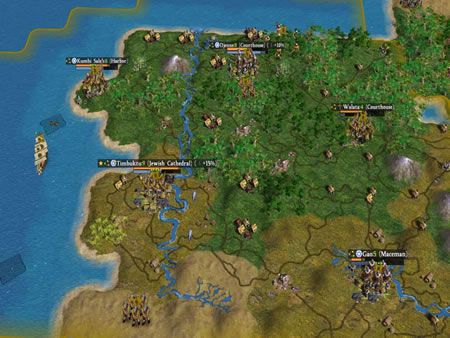 The sign of a truly addictive title is one that mere moments after exiting, you are already craving yet another go. And there lies the main problem with Civilization IV. It will simply devour every second of spare time you are privileged enough to have, and eat into time that is already reserved for other pursuits with unusual ease. If you are already well versed with the delights that previous iterations of the Civilization series have offered in great abundance, you will be well at home here with a title that reclaims that addictive quality that the second title had in huge quantities. If you are not, then you have been missing out on a gaming experience that is unrivalled in the turn-based genre, and now is the time to make a change. You will be glad you did. Even if it does lose you a few friends...