It’s long been a reviewers dream to get their hands on a copy of the latest in EA’s FIFA series of footballing titles. It gives the perfect opportunity to utilise those ‘style over substance’ mocking’s they’ve been practising all year long. In all honesty, these little pops at this particular football series haven’t always been without reason, with EA consistently providing a game that may have all the official licenses, and delightful little soundtracks, but always lost out on the pitch to Konami’s Pro Evolution Soccer series. 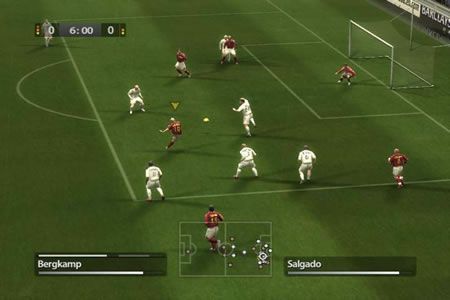 The beginnings of another football season mean the introduction another iteration of the FIFA series. This year’s big introduction is the ‘Manager Mode’ giving you the opportunity to basically take on the managerial duties for 15 seasons at a club of your choice. Taking on all responsibilities from team moral, to hiring and firing staff. In trying to take on the ‘Master League’ mode of the aforementioned PES series, EA have obviously attempted to introduce a little longevity to the single player game, and for the main part, it works. The ability to transform a lowly team with your skills on and off the pitch (you’ve the opportunity to either play, or merely watch games in Manager Mode) is an experience which will no doubt provide all of those who take the time out to concentrate on this area of play a great thrill. However, the actual managerial sections of the game feel alarmingly tacked on, and don’t come close to the depth of the Football Manager series, or even EA’s own managements titles. It’s a start, but one that needs more structure, and much more to do to really become a necessity.

Another introduction sees the ability to freely utilise your pad’s d-pad/analogue stick to select differing tactics and mentality. A quick flick of your finger and you can encourage your wingers to fly down the touchline, bring an extra player into the attack, or even enforce the offside trap. The introduction of an extra layer of strategy is never one we’re going to complain about, and while its use isn’t coming into question, the fact that it seems to go completely against the ethos of the FIFA series means that it’s going to be something passed up on by many of the great unwashed. Over a lengthy period of play, you can find yourself utilising this new feature quite perfectly, helping you up front, and at the back. But even remembering the four set controls can prove to be difficult, especially in the ‘heat of battle’ for FIFA veterans, what about newcomers to the game? FIFA has always been about instant accessibility for newcomers, allowing these players to compete with the very best in an instant, and this introduction does seem to cut out what’s quite a large demographic of players that could become quite disillusioned in a short period of time with the game. 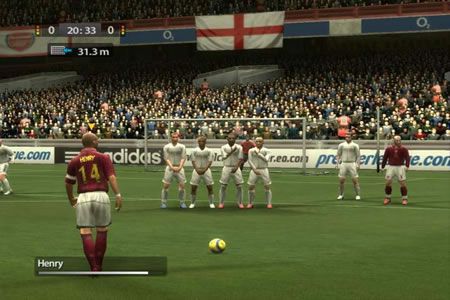 But it’s the action out on the pitch where FIFA 06 is going to live or die. And to be honest, things are not much different to last year’s effort. Unlike in the past, dribbling through a whole team with your aging centre back proves quite the impossible act, and for your first few games at least you’ll find yourself being embarrassingly beaten by some lowly opponents. But once you’ve find yourself set in the groove, you’ll be holding up the ball, spinning the last defender, and dummying passes with great aplomb. To watch, it’s quite a delightful footballing spectacle. To play however, things do begin to tear at the seams.

Attacking player is far too simple. Attempting to take the ball of an opponent proves quite a frustrating prospect, and while they might not make too much with the ball, you can find yourself chasing the ball around the pitch for a long series of passes. With the slide tackle proving quite difficult to pull off successfully, defending sometimes boils down to how quickly you can close down a player and hope he runs right into your beast of a central defender.

The actual weight and inertia of the ball yet again still just feels ever so slightly off. It’s been a problem ever since the games first inception all those years ago, but the ball just fails to move exactly as you’d expect, and can seem a little too ‘floaty’. All in all, actual in game play has certainly improved quite considerably from a few years ago, but it’s still just a few steps behind the best examples of footballing greatness. 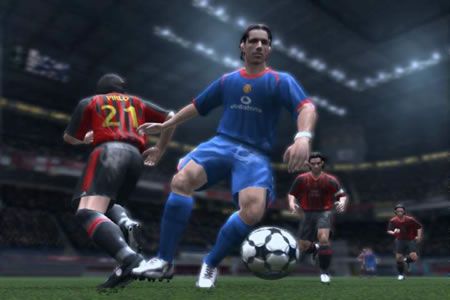 ​
Player likenesses for the famous at least have improved, with many looking quite startlingly like their real life counterparts. The likes of the two ‘poster boys’ in particular Wayne Rooney, and Ronaldinho proving very well representations of their true selves. If you travel down the leagues however, some seem to be completely at odds with how they should truly appear. Overall aesthetics have taken another step up, and FIFA 06 can run quite easily on a relatively lowly PC. But ramping graphical affects up to full will require quite a meaty set up.

While the Pro Evolution Soccer series seems to become less and less like a fun game, and push itself towards proper emulation of a game of football (all frustrations included), the FIFA series still seems more ready to provide shallow thrills. Extensive play shows that EA’s long lasting series still lags way behind Konami’s true footballing great, but the gap’s rapidly closing. With this year’s Pro Evolution Soccer series proving that Konami needs to give the series a complete overhaul to remain top of the genre, EA have missed out an opportunity to transform what’s still an immensely fun game, into the true king of the genre.