The world of MMO (Massively Multiplayer Online) gaming can be quite daunting for newcomers. If you’ve never played such a gaming title in the past, you could be forgiven for feeling more than a little overawed. You’re suddenly surrounded by thousands of gamers, all of which seem to know exactly what to do, and precisely what’s going to need to be done to beat the game. So taking into account the cost of the initial purchase, plus the required monthly subscription, most seem happy to continue getting their multiplayer action on their home consoles.

But here comes Guild Wars from NCsoft. Now Guild Wars is quite a different beast from the likes of World of Warcraft or Everquest. While these games rely on monthly subscriptions to cover all kinds of costs, with Guild Wars you never pay anything more than the initial purchase in your local gaming emporium. Again, where the other big hitters in the genre require incredible numbers of hours put in, in order to get to any kind of decent in game level, Guild Wars requires you to display your intelligence and skill. With the in game level cap set at 20, which is reachable in quite speedy time, your own skill is required if your going to ‘beat’ the game. 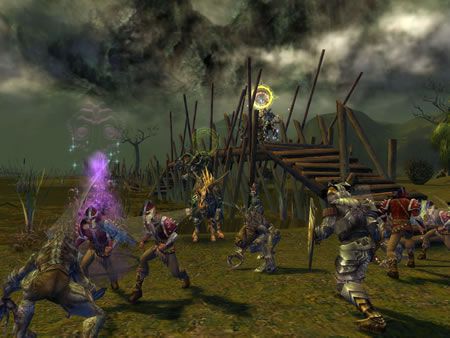 Guild Wars itself is all about the missions. Through the whole game you’ll usually have a few missions on the go, ranging from the important ones that require completion in order to progress the story, to the tiny little sub-quests that simply give you a few extra coins, and a fancy new weapon. It’s to the games credit that these sub-quests aren’t solely busy work, requiring you to spend hours traversing the game world in order to keep you busy, and earn your character an extra step up the experience ladder. If anything, these quests are quite often more involving than the main storyline.

Missions themselves are very easy indeed to discover. Talking to the majority of the games NPC’s (non player characters) will give you the opportunity to take on a task that they’d love you to complete. While the opening missions show off the basics of Guild Wars gameplay, it isn’t too long before you’re encouraged to team up with another gamer and combine your skills to continue. Finding someone who’s willing to become your in game buddy isn’t too difficult at all. Even if you don’t know anyone already in game, there are numerous players at the in game hubs (the cities, where all players are viewable) that are at the same point as you in game, and are looking for a like minded gamer to team up with. Once you have your small party (maximum party sizes increase as you progress through the game), you can move out of the city and into the wild plains of Guild Wars. Once you’re outside a city’s walls, you won’t see any other players (apart from your companions of course). Here it’s you against the world. There’s no queuing up to defeat a creature that requires being defeated before you can continue the online story here. 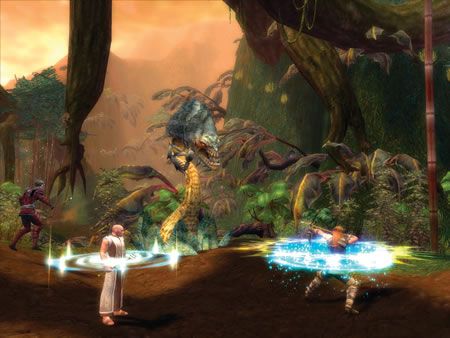 Your chosen character is based on one of six chosen Primary Professions. Each profession of course offering its own unique strengths and its own unique drawbacks. Your outward identity, which everyone online will see is governed by your profession choice too. If you decide to set yourself as a great hulking warrior, that’s what everyone else will see. Set yourself as a tiny, feeble looking elementalist, and that’s what you’ll appear as. As you progress through the game you’ll have the choice to give yourself a secondary profession. Making use of this little feature gives you access to a second set of attributes and skills, if lacking the main primary attributes that gives each professions it’s true unique identity. If that wasn’t enough variety for you, each profession also has a set of attributes you can build up with attribute points. Guild Wars allows to actually remove points from an attribute in the future, if you realise you were heading down the ‘wrong path’, and required some other ability heightened to give you the best experience.

But what about the Player versus Player action. Heading to the Arena gives you instant PvP action, teaming you up automatically with other Arena ready players and leaving you to take your aggression out on your nearest opponent. The real fun is to be had in the Guild Hall matches, where team play and strategy is the key to success. Getting a well worked set of tactics worked out between you and your fellow Guild members gives you a much better chance of victory, and improving your Guild’s ranking. 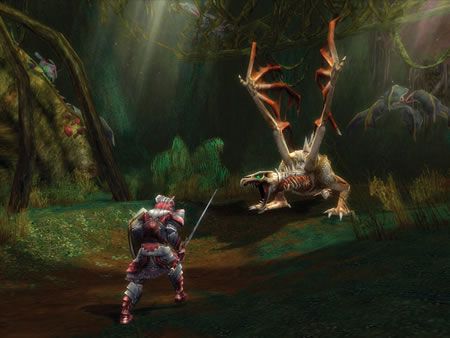 ​
The fighting system in Guild Wars is something quite different to other MMO’s. Before you leave a town setting, you’ll need to equip your weaponry, armour, and load up your Skill Bar with the eight skills you see as your best. These skills are the real key to victory in all of Guild Wars’ battles. Other than simply clicking on your opponent to strike them with your basic weapons, you need to make well timed use of your Skills in order to overcome your enemy. Each take a particular amount of time to recharge, and eat up a certain amount of energy, so timing is key. You don’t want to eat up all your energy reserves with a killer strike that misses your opponent and leave youself wide open to an attack, without the ability to reclaim a few hit points. Over time, and once you become fully accustomed to your different Skills, you’ll develop different kinds of strategies which you’ll automatically fall into as you enter battle. It’s this system that rewards skill, rather than who has the more experience points that makes Guild Wars truly stand out.

Guild Wars is quite the visually appealing game too. While the initial few cities and areas aren’t too wide in variety, and can look a little sparse at times, the later sections of the game introduce some glorious colour schemes, and some detailed architecture. 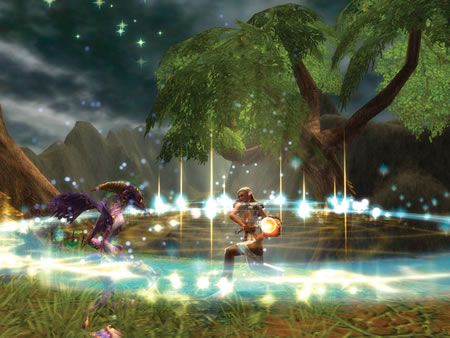 Is Guild Wars the best example of MMO out here at the moment? For most of you, probably not no. World of Warcraft seems to have firmly grasped that title. But for those making your first intrepid steps into the genre, there’s no better learning curve than starting with the likes of Guild Wars. With the usual down points of the genre removed as mentioned earlier on in this review, all newcomers will instantly find enjoyment, even if they can’t spend 12 hours a day online.