Just installed a Beta version of Linux Mint 19 to it's own Crucial 250Gb SSD drive and it appears to be working well.

It's only available atm with the Mate desktop (and in 64 Bit only) but will be available with a choice of desktops when the final stable version is released, including, presumably, Cinnamon, my favourite desktop.

For this install I booted from a USB stick, I'd never done that before, certainly beats burning an ISO to a DVD for cost-effectiveness. To load a bootable OS from the ISO file to the USB drive I used a free piece of portable software named Rufus within Windows 10 which worked remarkably well. Rufus added a couple of files to make the Distro bootable during the conversion process.

The interfaces within V.19 have changed and so far are agreeable to me. Have installed the Nvidia drivers, all updates, Scribus and Bleachbit so far and disabled screensaver and all power options. 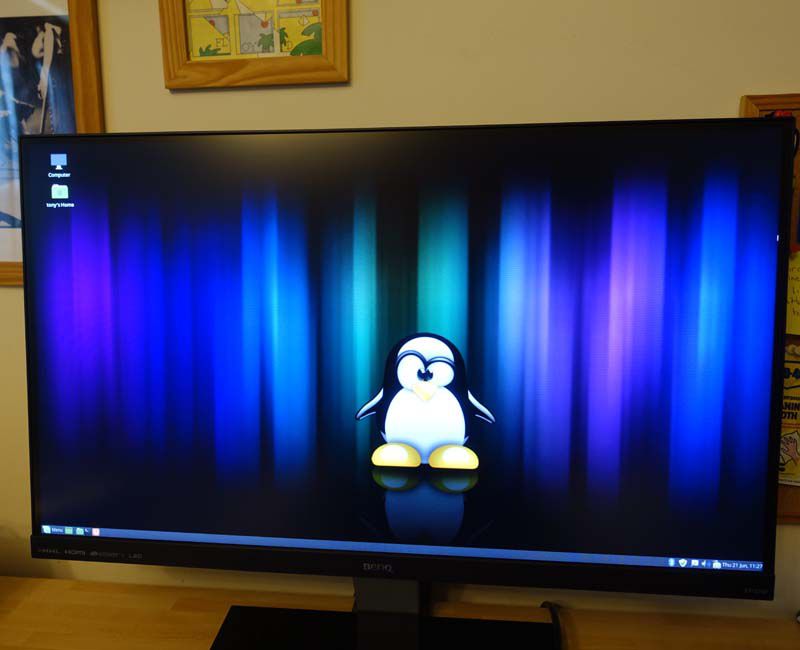 I would like to install and run Linux on this box but I'm stuck with secure boot, and I don't know how to configure the BIOS to boot from a different volume on my hard drive.

Abraham Andres Luna said:
I would like to install and run Linux on this box but I'm stuck with secure boot, and I don't know how to configure the BIOS to boot from a different volume on my hard drive.
Click to expand...

What make and model is yer lappy ?

Abarbarian said:
What make and model is yer lappy ?

Abraham Andres Luna said:
I would like to install and run Linux on this box but I'm stuck with secure boot, and I don't know how to configure the BIOS to boot from a different volume on my hard drive.
Click to expand...

The 64-bit ISO can boot with BIOS or UEFI.
Click to expand...

Abraham Andres Luna said:
Hello, I have a Dell Inspiron 3147, if that helps you any.
Click to expand...

The start of this article may help

muckshifter said:
can boot from UEFI

Have you installed Linux alongside Windows 10 and booted into the different OSs? For some reason, my laptop is configured to only boot into Windows and it doesn't give me the option to choose a volume. I have to start up into Windows and then select advanced reset options and choose "Boot Into BIOS" but then when I'm in BIOS I can't figure out how to boot into a different OS.

Abarbarian said:
The start of this article may help

So you think I should try Mint? If not then which flavor of Linux should I try? This will be my first time using the OS if I am successful.

Abraham Andres Luna said:
For some reason, my laptop is configured to only boot into Windows and it doesn't give me the option to choose a volume.
Click to expand...

"The Linux Mint 19 “Tara” operating system is now available to download ahead of the official release later this week as Cinnamon, MATE, and Xfce editions for both 32-bit and 64-bit architectures.

Linux Mint project leader Clement Lefebvre announced today that work on the forthcoming Linux Mint 19 “Tara” operating system is now over and that the team prepares for the official release later this week. However, the final ISO images for all three editions of Linux Mint 19 are already available to download on the official servers."

Well, you would say that wouldn't you? I suspect your motto is 'What is life without a challenge?'

PS: I couldn't get my Auzentech 7.1 Prelude X-Fi PCI sound card working with Mint, the card being based on a Creative chipset. I searched t 'net for a solution to no avail.

So I bought an Asus Xonar DGX PCI-e sound card and that works fine within Mint. Luckily this old motherboard has both PCI and PCI-e slots and I did find a home for the Auzentech.

Would have preferred to use the Auzentech though as it's one of those rare sound cards that has a coax digital out as opposed to Toslink optical digital out and I'm a using a DAC with this setup.

And by way of interest the Asus soundcard is around £53 at Novatech and other suppliers but I bought one for £25 from Ebay/Currys/PCWorld. That is a huge price difference.

floppybootstomp said:
Well, you would say that wouldn't you? I suspect your motto is 'What is life without a challenge?'

Well I use Arch to create excitement and to bring some element of challenge to my computing life.

I keep a copy of MX around on a usb stick and run it as my backup os due to the fact that it is so stable and reliable.
It is partly created with some Ubuntu stuff so is pretty much the same as Mint in that respect. I just prefer the way it is set up with Xfce over the Mint offerings.

Just so you know I have an Auzentech Prelude X-Fi and the card works perfectly under Karmic in 5.1 and 7.1 mode. Never had any problems with it whatsoever, just remember to type alsamixer in the terminal and to unmute channels

If you follow this breadcrumb trail I think you will find that the Auzentech card uses a E-mu 20K chip which should utilise the creative drivers and should work in linux. That is if I have understood things correctly.

Based on Creative Labs' X-Fi chipset

E-MU 20K is the commercial name for a line of audio chips by Creative Technology, commercially known as the Sound Blaster X-Fi chipset. The series comprises the E-MU 20K1 (CA20K1) and E-MU 20K2 (CA20K2) audio chips.

The 20K1 chip was launched in August 2005, and ever since it has been used in a variety of audio solutions from Creative, and more recently third-party manufacturers, such as Auzentech and Audiotrak.
Click to expand...

An open source driver is available with OSS v4 build 1013 and above.[15] Datasheets were provided by Creative to enable ALSA driver development.[16] On November 6, 2008 Creative finally released their driver under a GPL license.[17] It supports x86 as well as x86-64 architectures and is listed in their support area.[18] On May 15, 2009 after some communications with Creative, SUSE developer Takashi Iwai finally got a mergeable version of their X-Fi driver. On August 31, 2009 the driver (snd-ctxfi) was included in release of ALSA 1.0.21.[19] Support for Creative Sound Blaster X-Fi Titanium HD was added on January 25, 2012 in ALSA v1.0.25 release.[20]
Click to expand...

This page describes how to enable support for Sound Blaster X-Fi devices on Debian systems.
Click to expand...

or this may be the page needed

Firmware is required to be provided for E-MU Digital Audio Systems devices.

The EMU20K1 and EMU20K2 chipsets are supported by a different driver.
Click to expand...

Abarbarian said:
I just prefer the way it is set up with Xfce over the Mint offerings.
Click to expand...

Looks interesting I like that they do long term editions up to 2020/1 ish and a Gamers edition.

I'm happy with MX as I know my way around it now and it has never let me down.

Hazy memory here but I seem to recall I couldn't get an MX distro to run when I tried it a few years ago.

I do have a spare 500Gb mechanical HDD atm and was thinking of trying AV Linux, it being focused on audio-visual aspects.

And I've just noticed Mint 19 is out of Beta stage, official stable version now released. I wonder if my Beta install will upgrade or it means yet another fresh install?

Thanks for the info on the Auzentech Abarb, I may try it again but after all that kerfuffing about I'm not right keen atm. The Auzentech Prelude, imo, was a very good sound card so it would be a shame not to integrate it in a fairly recent computer build.

I would do a fresh install of Mint if I were you. Why on earth did you try out the beta version ?

AV Linux sounds neat and you would probably only need at most 200 GB of that drive to run it on.

As to MX I have only ever installed it via a Live USB version of MX. It really should run fine on your set up. I gave up on trying distros from DVD/CD years ago once I had bought a 8 GB usb stick. Nowadays I find that a lot of Live distros run almost as fast as a desktop install if run from a usb 3 or fast enough for daily use at least.

Abarbarian said:
I would do a fresh install of Mint if I were you. Why on earth did you try out the beta version ?

Plus the fact I didn't have any Linux distros installed at the time so thought may as well try 19 Beta rather than Stable 18. Logical?
Ad

Plus the fact I didn't have any Linux distros installed at the time so thought may as well try 19 Beta rather than Stable 18. Logical?
Click to expand...

Wellllllllllllll I guess there is some sort of logic in your choice.

Looks like AV has had some decent lurve lately

AV Linux 2018.6.25 is the latest version of the GNU/Linux distribution, shipping with various performance improvements for systems with recent AMD Radeon graphics cards and UEFI machines. UEFI support was introduced back in April 2018 with the AV Linux 2018.4.12 release, but it also brought slow booting, which were addressed in this release.
Click to expand...