During the last twelve month period the Computer Power Supply market has become very competitive. For a while those seeking a quality PSU would mostly look to only Antec or Enermax.

Tagan gained a good foothold in the market a little over a year ago with their attention to detail and assurance their PSU’s would deliver the quoted current without hiccups. And now we have a new kid on the block, Hiper, also supplying up market PSU’s. 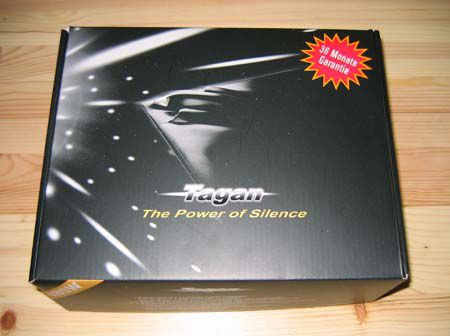 The Tagan TG480-U22 Silent Power Supply​
This review will look at Tagan’s latest offering, the 480 watt version from their new range, the TG480-U22. It’s being touted as extra quiet, and, to cut to the quick, it is. It has two 80mm fans, thermally controlled, and these are mounted at front and rear of the PSU, rather than opting for one fan placed on the lower edge, as is more common.​
Included Items​
Opening the box, we see the PSU in some cardboard sleeving, the main loom to the right of it and a separate box containing goodies:​ 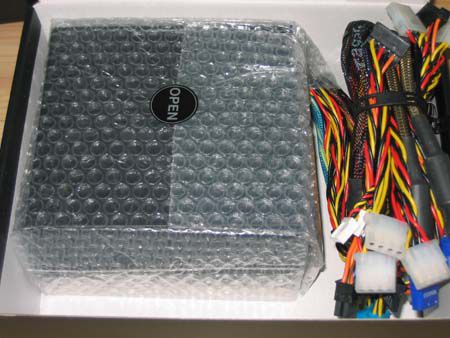 Contents of smaller box: Velcro ties; Power Cord; 6-pin VGA plug for extra PCI Express card; 2 black cable ties and 4 mounting screws. The power cord is braided in a similar fashion to the braided internal cables, which is unusual and, I felt, a nice touch: 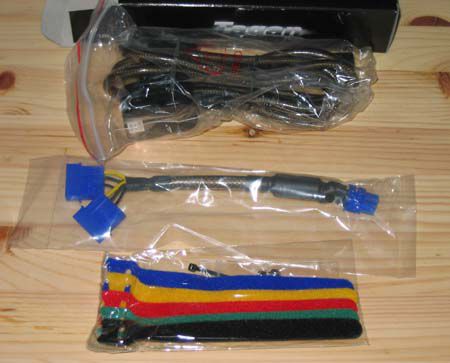 Included Items​
Note the 12 volt switch. Default setting is 'Split' and in this mode the 12 volt rail is limited to the stock setting of 20 amps. In combined mode, current is split equally between all rails on a first come first served basis, to the total capability of the whole unit: 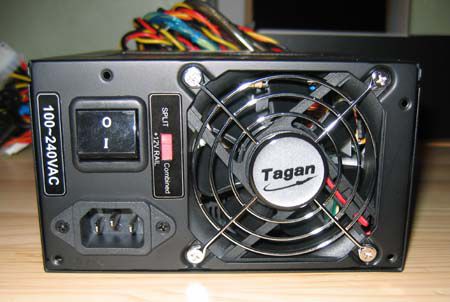 Tagan say this is a work around for those who are using lots of 12 volt peripherals, such as a built in RAID subsystem on a server. 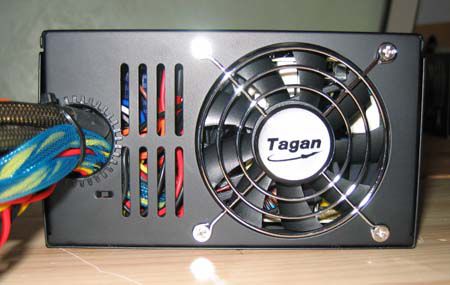 The TG480-U22 provides extensive cabling, for almost every type of power connection required: 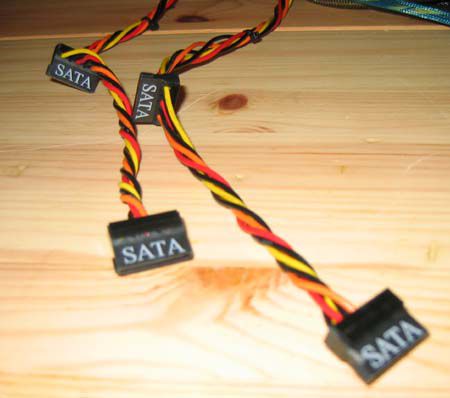 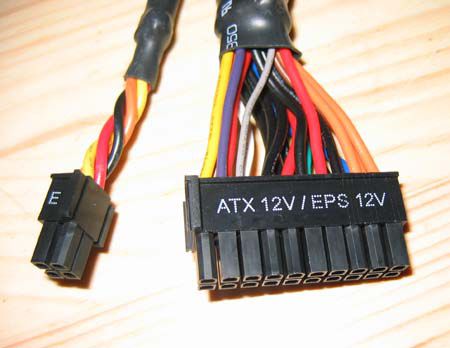 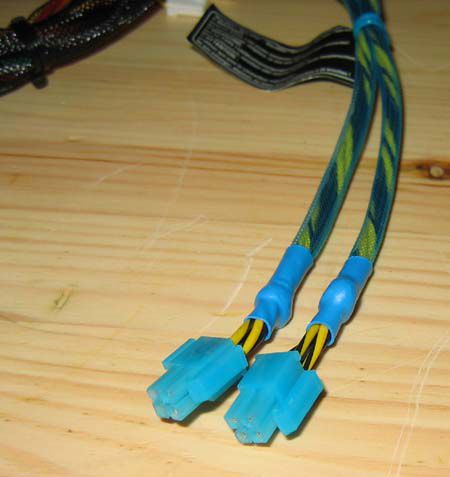 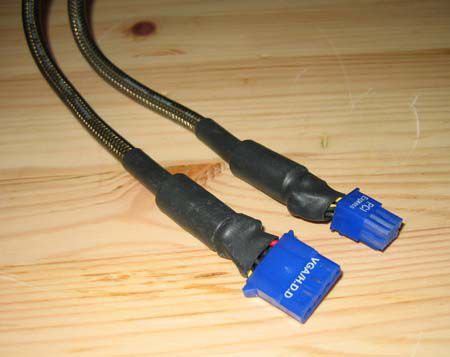 For those lucky enough to be using a pair of PCI Express cards, a second 6 pin connector is supplied (see earlier picture) in the form of a molex four pin male/female converter lead. 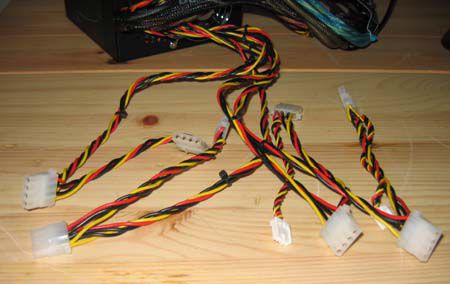 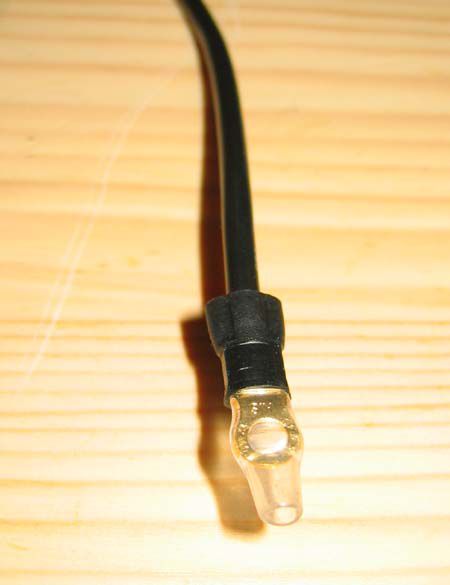 A new one to me, I've never seen a PSU with a large earthing cable before. By connecting this to one of your motherboard mounting screws, the manual claims stray ripple across each rail will be reduced and give greater stability. I took them at their word and connected it.

Although the Tagan can't actually be seen in a Lian Li case as the enclosure is shrouded with aluminium casing, I thought I'd include this pic to show what the cabling looks like in place. 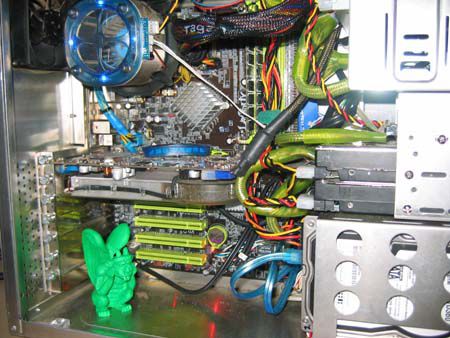 I haven't spent a great deal of time tidying and yes, it could do with a little vacuum cleaning in there. Routing the various cables was very easy indeed and those not required were cable tied and tucked on top of the upper optical drive.

I particularly liked the separate, shrouded, VGA card connectors. None of the plugs are UV-reactive although they may look like it from these pictures.

I've had the Tagan 480 running for three days in my main machine now, it's steady as a rock and I'm getting good temps. It replaced an Antec 430W unit.

I checked voltages with the hardware monitor supplied with my DFI motherboard and observed most rails were shown as being a little under par: 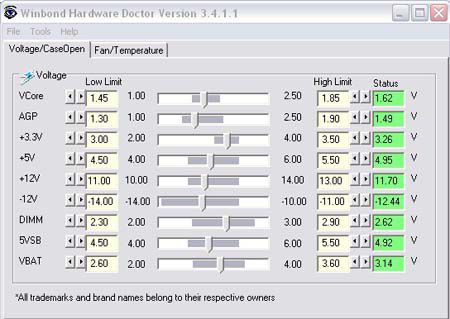 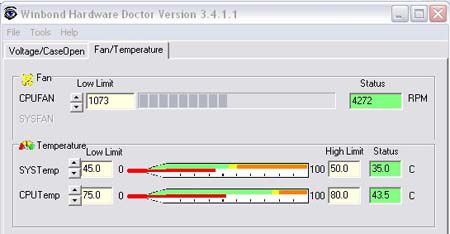 Temperatures​
However, using my Fluke Digital multimeter, every single voltage rail showed as being a little over par. Never could rely on software monitoring much.

Using a voltmeter is a much more accurate way to monitor voltages. I took readings from the main Motherboard connector and a couple of molex 4 pin plugs. All readings were taken with CPU at full load.

Typical + voltages were 12.1; 5.1 and 3.4V. These wavered only slightly when I burnt a CD and played CoD online, but only a little, perhaps changing by 0.1V in each instance.

To sum up, the TG480-U22 is a good looker, runs quiet and is a breeze to install when routing it's cables. Most every requirement seems to have been catered for and at time of writing, it seems future proof.

The TG480-U22 is very similar in performance to the TG480-U01 reviewed earlier last year, featuring the same high build quality, stable power lines and Active Power Correction Factoring. Most importantly, this power supply lives up to its claims of being near silent.

The Tagan retails for around £70.00 in the UK and I would recommend it wholeheartedly.