In this article we’re going to take a look at a recently introduced two-way KVM switch, the CS62DU from a company named Aten. A KVM switch enables a user to use two or more computers with one Keyboard, Video Display and Mouse and in this instance, 2.1 Audio and a microphone.

This model has only recently been introduced and offers DVI & USB2 switching with audio between two computers. As far as I’m aware at time of writing this is the only model currently available at a reasonable price that offers these facilities.

The CS62DU features a wired remote control button which enables the user to simply press an illuminated desktop button to switch between machines. This remote switch is in addition to the normal keyboard switching commands employed.

I found this a welcome addition and made switching between machines a real pleasure. A much better option than the usual having to reach over for the KVM box to hit a switch.

And talking of the heart of the KVM being housed in a box, this particular model doesn’t have a box as such, just a small module in line with the cables.

Let’s have a look at this piece of kit then, this is how it arrives, in a bubble pack. 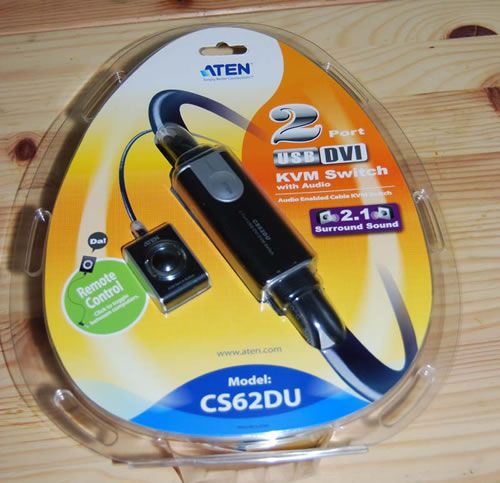 And the rear of the package. 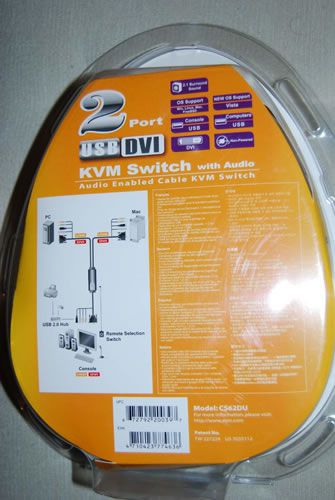 When we open it up, it looks a little like a jumbled mass of cable, which, all things considered, is exactly what it is. 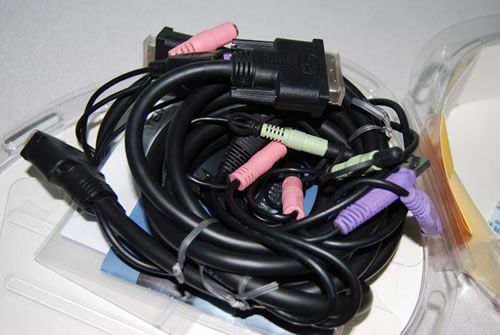 Here’s all there is in the package, the main KVM itself, the remote control switch and the manual. 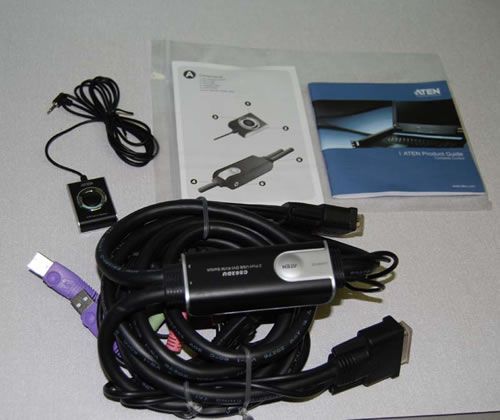 Here’s the main unit unwound. Looks a little like the Hydra of legendary Greek myth perhaps? 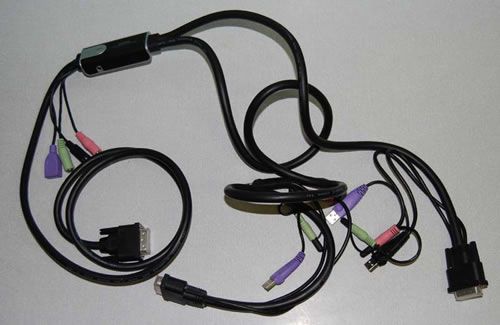 One of the two sets of connectors: 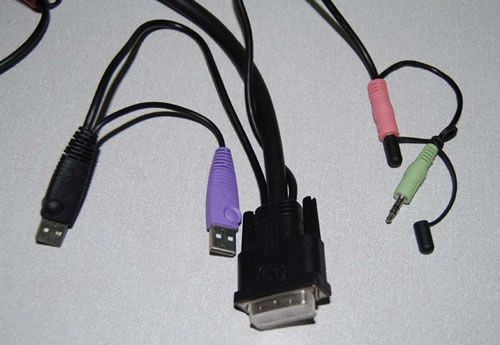 The set of sockets for plugging in keyboard, mouse and monitor: 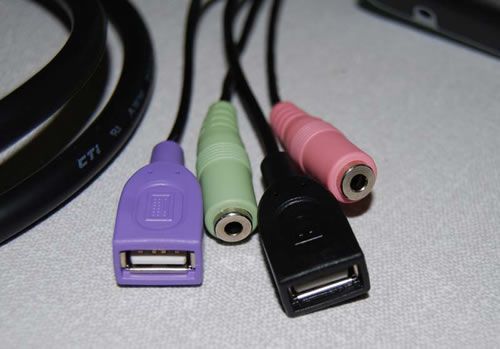 These are the components I used with the KVM that were common to both machines:
I haven’t used the audio facility as I’m switching between my main gaming machine which uses a 5.1 loudspeaker system and a media machine which sends audio out to a fairly decent Hi Fi System.

It’s perhaps worth mentioning here that if you have any USB peripherals these can be switched between machines by adding a USB hub to the black mouse socket on the CS62DU KVM.

Then simply plug in to the hub your mouse, a printer, a gamepad, a scanner, whatever. Then when you switch, these peripherals will switch with it. I was really quite fond of this function, being able to use, say, a scanner between two machines is a definite bonus.

Here’s a diagram from the user manual. 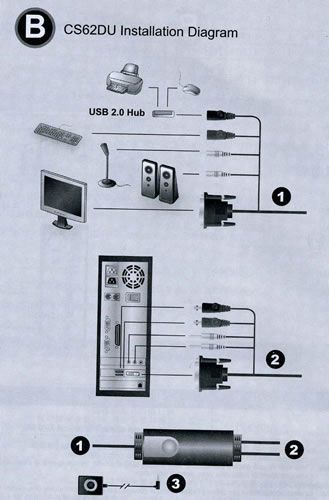 As well as using the remote switch to switch between computers the user can also use the keyboard. Tapping twice on scroll lock and hitting enter does the basic switch.

Apart from that, other commands will also:

1) Toggle only KVM components without audio.
2) Toggle only audio signals.
3) Auto scan facility where the KVM will toggle between machines at intervals in seconds set by the user.

Personally, I have yet to appreciate the advantage of that last function listed.

Update: Since this article was published it has come to my attention that some of the unique functions of the Logitech G15 keyboard will not work through this KVM switch.

Notably the Gaming macro keys and the LCD display.

The multimedia controls still work within Windows Media Centre; Windows Media Player and Nero 8 Studio. They do not work with latest version of Winamp though.

The Windows Button mute control still works as do the illuminated keys settings.

I would imagine the macro controls will also not work on the Logitech G11 keyboard which is basically a G15 without the LCD display.

The problem may or may not be unique to the G15 & G11 keyboards but be aware that other multi-function keyboards may also not work properly.

All other keys work well. Somewhat disappointing so please be aware of this setback before purchase.

Here’s some pix of the two systems I’m using the switch for.

System One, the media machine, with Logitech wireless keyboard and mouse setup and a BenQ 19” TFT Monitor. 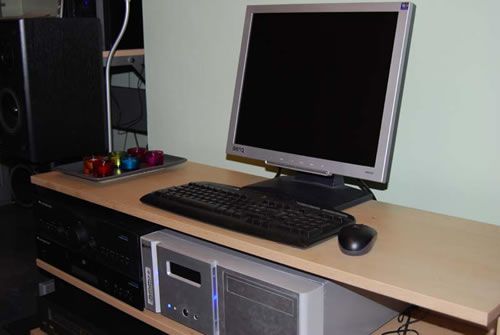 System Two, showing Desktop of the other machine. 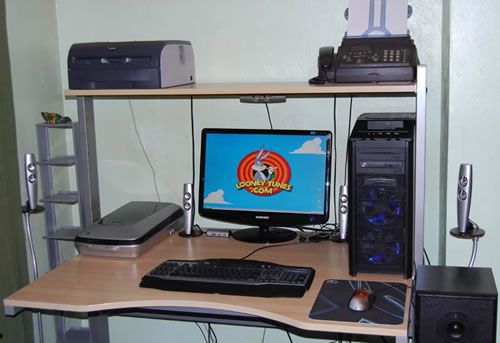 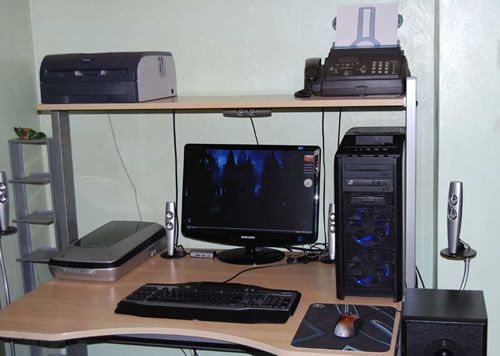 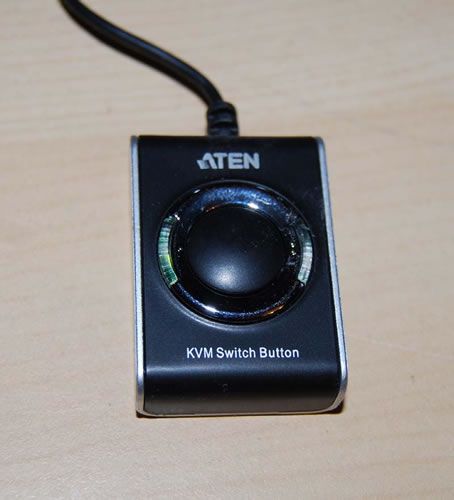 And my media machine without Keyboard mouse and Monitor, just waiting for a nice big 32” TFT TV to go with it. 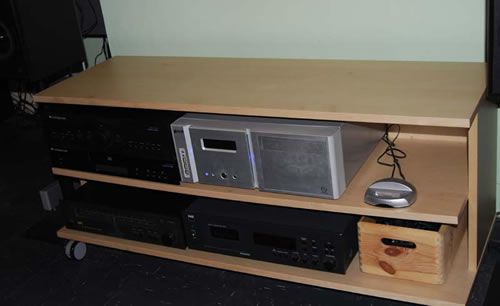 Now I have fitted this switch I can select all my music from one location and play it over my Hi-Fi. It’s nice being able to hit a switch and choose from more than a thousand music albums.

And when I eventually add a TV, I can select movies and TV stations from this main machine. I can also control the audio level with a remote control for the Hi Fi Amplifier. Which is a Cambridge Azur 640A 70W x 2 for anybody who’s interested.

To sum up, the Aten CS62DU is well built, the cables exude quality, it does it’s job effortlessly and as long as you don’t mind sticking with 2.1 audio, will switch your speaker setup and microphone as well as your other components.

I’m really quite taken with just tapping this switch on my desktop and being able to access my media machine.

It currently costs around £70.00 including postage and is available from this supplier at time of writing: KVM Switch Direct

This product would have scored a very respectable 9 out of 10 but because of the shortcomings with the G15 keyboard we’ll award the CS62DU 8 out of 10.