Diskeeper is a defragmentation program and claims to do a much better job at defragmenting hard drives than Windows' own built in software.​
For those unfamiliar with defragmentation it's a process whereby all the information stored on a hard disk is ‘put back in order'. After some use, the information on your hard disk actually gets moved around and data that should reside next to corresponding data gets moved away from it.​
This means when the heads on the hard disk are reading some particular software or other, they have to jump from sector to sector to read information. When data is scattered about a hard disk it's known as being ‘fragmented'.​

Diskeeper's defragmentation software corrects this problem and rearranges all data so that all data for any particular program is stored together in one location on the hard disk. The heads therefore don't have to keep moving from one location to another to read information. This means faster hard drive performance, and therefore system performance.​
Product Range

Diskeeper comes in quite a lot of different versions and there should be an edition to suit most any computer user's requirements. The products range from Diskeeper 2007 Enterprise Server Edition to Diskeeper 2007 Home. I would expect that most readers here would be interested in the versions of Diskeeper intended for home use. There are three of these, Pro Premier, Professional and Home. If you want to view the differences between editions, the full info is here .

I was given the Pro Premier edition to try which is identical to the Home edition as far as I can see with the exception that it contains a feature called I-Faast, which simply put ‘Learns a system's file access patterns then accelerates file access and creation'. The version that most of us would go for is the home edition and a one licence version of this costs £23.74 inc VAT. The Pro Premier version costs £95.20 inc VAT and the Big Daddy of them all, the Enterprise Server Edition, costs £975.47 inc VAT.

The first thing you see when installing Diskeeper is this notice:

This only applies if you intend to install the software across a large network but as most of us home users don't usually have more than 2 or 3 machines, this doesn't concern us so I installed Diskeeper straight to my hard disk. My main hard disk, incidentally, is a RAID 0 array using two Western Digital 74Gb Raptors.

The main difference and improvement in the latest version of Diskeeper is something they term as 'Invisitasking' which means the program will defragment your hard drive in the background but only doing so when the software being defragmented is not being used. Diskeeper claim this feature does not affect system performance.

Here we can select auto-defrag. If not selected, this feature can be accessed at a future date from the program's menu. 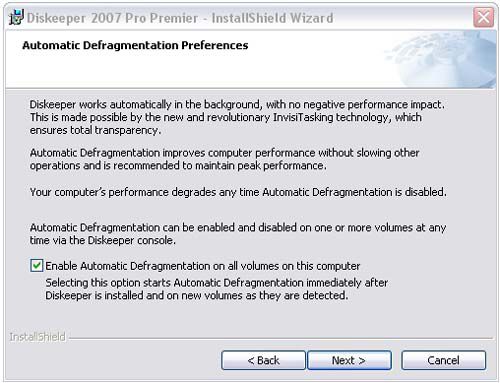 If the software needs updating, you will be prompted to download the latest patch: 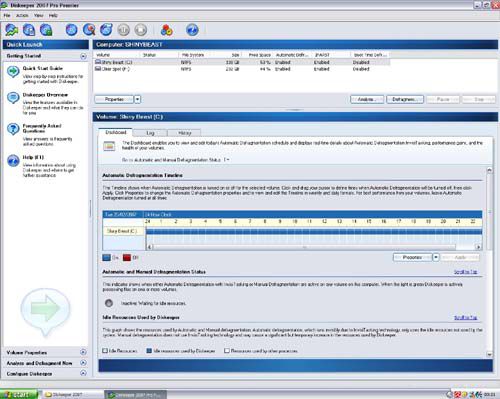 C Drive before defrag, the red sectors are fragmented files: 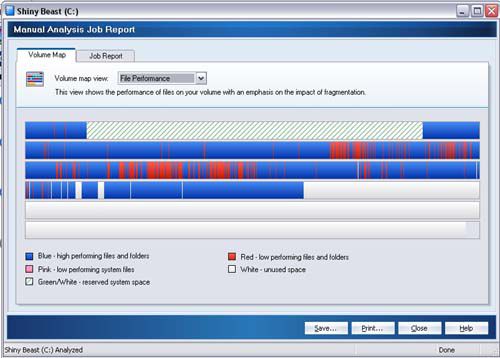 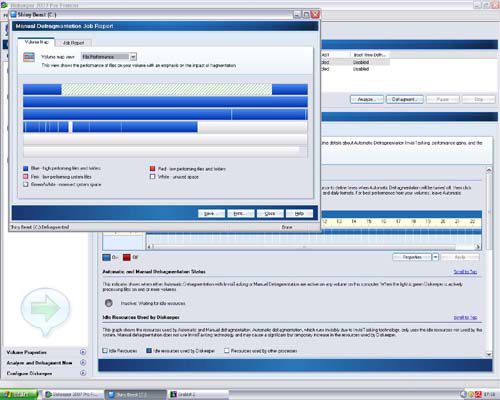 A more detailed screen shot of C Drive after defrag. 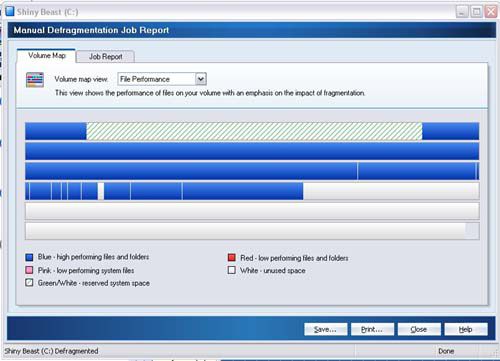 F Drive prior to defrag: 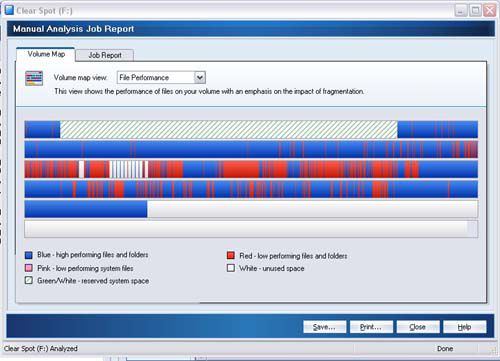 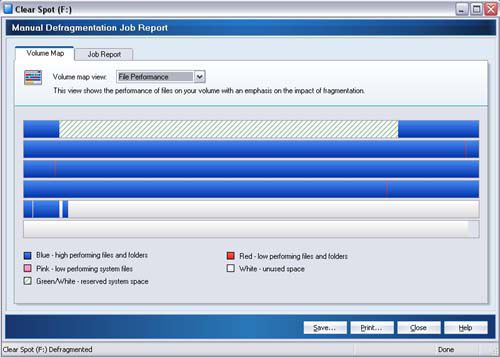 So Diskeeper 2007 would appear to do a good job in a quick time. I had been using Diskeeper V7.0 from around 2001 for years and this new version is so much quicker and with a much slicker interface.

The question still remains whether defragmentation actually improves disk performance though. My own experience is that it does. Having said that, I had to let my hard disk fragment for at least six months before I actually noticed any lack of performance. De-fragging did actually put a 'sparkle' back into my system. And if Microsoft didn't consider defragmentation to be a desired thing they wouldn't have included the function within Windows. And whilst I've mentioned Windows, it's worth noting that Diskeeper will defrag your drives in a fraction of the time Microsoft's built-in software takes to do it.

When you get right down to it, Diskeeper is a software program for defragmenting your hard drive. And that's it. I do feel that this software does a good job but the interface has, in my opinion, way too many controls and options. Sure, it looks nice, but do we really need all that information and options? I could almost accuse it of being bloatware but as Diskeeper doesn't appear to affect system performance I guess all those bells and whistles are harmless.

Running Invisitasking - and in my case with the Pro Premier edition, running I-Faast - didn't hit system performance either. Diskeeper Invisitasking will, as I mentioned earlier, give way for other programs when you're using them. I found that this was a quite delicate feature. How was that? Well, I just couldn't get Invisitasking to run and I wondered why not.

The answer lay with the Crunching program I'm running, crunching proteins to attempt to find an AIDS cure using WCG and BOINC software. Once I disabled BOINC, Diskeeper's Invisitasking kicked in.

​
With BOINC switched off:

​
So, all you crunchers out there, you probably won't be able to take advantage of this feature. To see how well the auto feature worked I did switch my crunching program off for 48 hours. After this time my C drive was partially defragmented from its previous condition, but not fully. I'd guess that full auto defrag would take about a week.

Overall, I like Diskeeper and think it's an excellent piece of Software. It knocks spots off of Windows' own defrag tool (I'm currently using Win XP Pro with SP2) and it's very satisfying to see nice clean hard drives after running it. For the price, Home Edition Diskeeper 2007 is good value for money, it hasn't really changed its price much in seven years but the product has improved. And if you like the look of the extra features by all means go for the Pro Premier edition.

If you're crunching it really doesn't matter that you won't be able to crunch and use the Invisitasking feature at the same time, the manual defrag does a fine job. And personally I'd rather manually defrag anyway.

I personally feel that defragmentation does help keep your system running as new and Diskeeper performs the task admirably. You can download Diskeeper 2007 from their site here and as I mentioned earlier, the basic home edition is £23.74