There are a bewildering amount of water cooling components and kits on the market, ranging from custom made components to ready made kits containing everything you need to take the water cooling path.

Most ‘off the shelf’ kits cost in the region of £150.00 so we were interested to receive a review package of this all-in-one water cooling solution from vadim.co.uk which retails for £67.04.

Our review kit contained only a block to cool the CPU though further solutions are available for VGA and hard drive cooling. 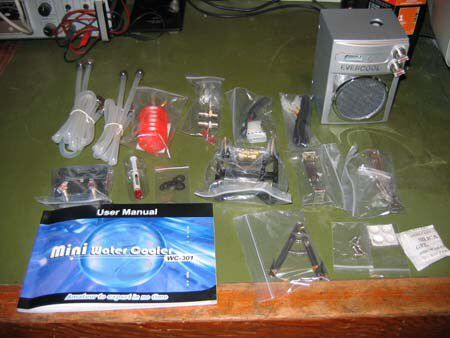 Evercool Mini Watercooler WC-301 Contents​
Installation​
The main unit, which is a combined reservoir, pump, radiator and fan, can be mounted internally, normally taking the place of an 80mm exhaust fan, or placed externally.

To use externally, the two internal water tubes are connected from the CPU block to a PCI bracket, and then two more tubes are fitted between the other side of the bracket to the main unit.

The following machine was upgraded with the watercooling kit (shown with current air cooling): 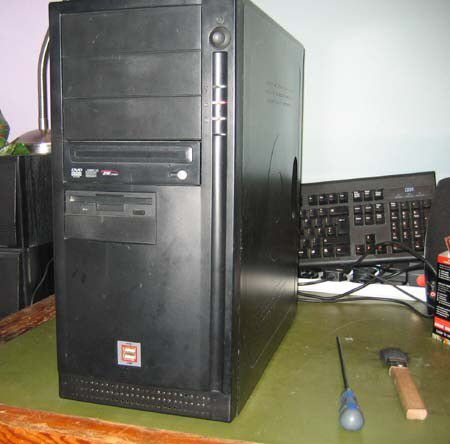 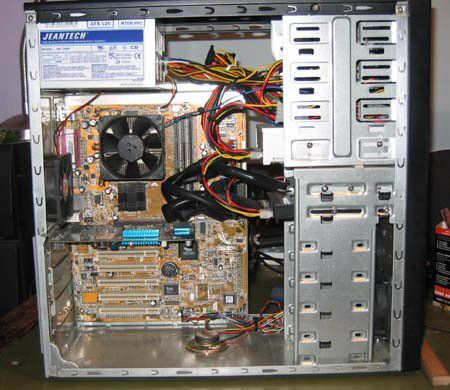 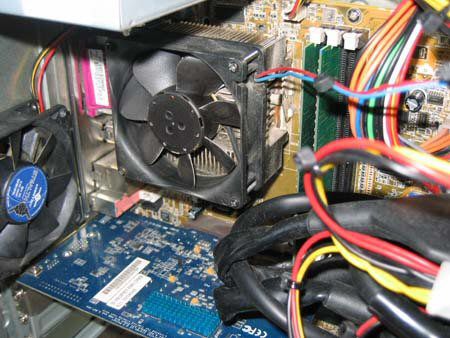 The Test Machine​
I thought this was a good yardstick as it’s a no frills machine and is typical of a good many computers being used at home. It was also running quite hot.

Computer Specifications:
The midi tower case I was installing to had enough room to house the main unit inside, so I removed the rear Vantec exhaust fan.

The next step was to measure how much tubing I'd need to connect from the main unit to the CPU cooling block. I then used the circlip pliers to slide the circlips off the metal tube connectors, removed the connector from one end and cut two lengths of tubing to the right size using a stanley knife. At each tubing connection a red silicon washer or 'o' ring is used to make good a leak proof system.

Then everything is connected together so you have a sealed unit, pour in the anti-corrosion fluid, top up with water and then bleed the system.

The main unit has a small window where you can observe the fluid level. Connect a molex power connector from your power supply and let the pump fill the tubing and CPU block with liquid. More water is added to the reservoir at this stage.

There is an audio warning system that beeps if the water level is too low so your ears let you know when you have the water level correct. Once that's done you screw in the top plug to the reservoir and bleed the unit.

Bleeding is simplicity itself, you simply tip the main unit on it's side and wait until no bubbles appear flowing through the tubing. You may have to flex the tubing a little to help the bubbles on their way.

Normally, you'd leave the CPU's old cooler in place so you can turn the computer on to use a PSU molex connector to power the pump and fill/bleed the system. However, in my haste and failure to read the manual fully, I had already removed my old cooler before creating a sealed unit.

It's been said a thousand and one times but it really does pay to read the manual. The instructions supplied here are adequate and easy to understand. 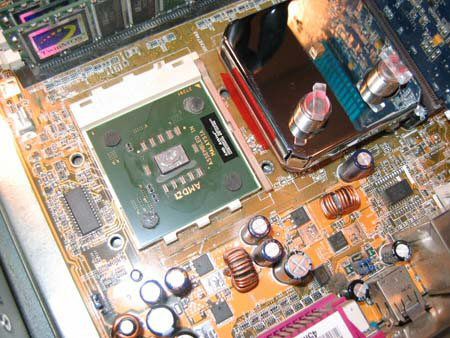 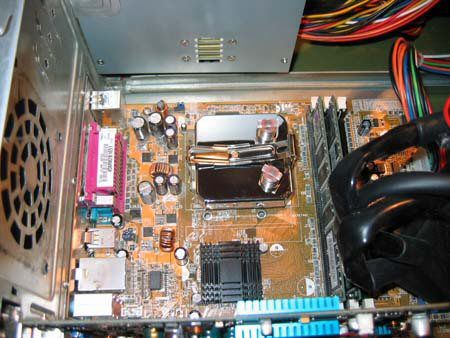 Water Block on CPU​
I used a DC power supply to power the pump when filling the system, the pump runs on 5 volts and the fan on 12 volts. Not really recommended, but I couldn't be bothered to refit my old Thermalright cooler. 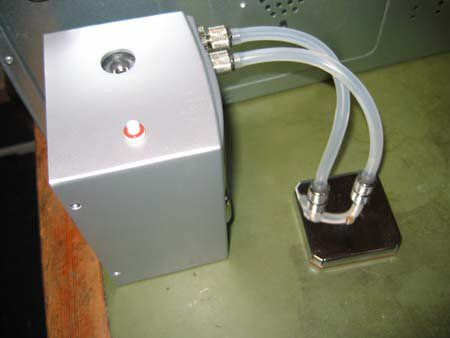 System prior to filling​ 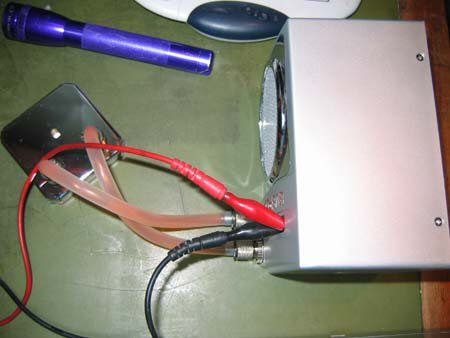 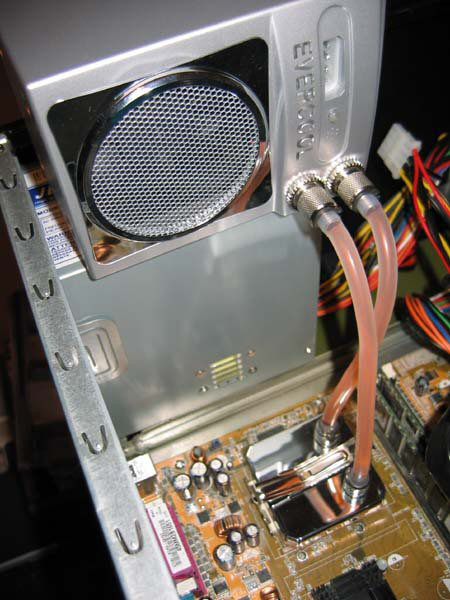 Cooling block fitted to the CPU, prior to fixing main unit in place​ 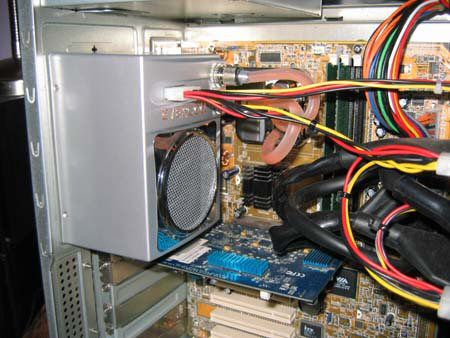 Everything in place with molex power plug connected​
The unit fitted neatly into place and was secured with the supplied fixing bolts through the four case holes that formerly held the 80mm fan. It has a variety of fixing holes to allow for most case configurations.

There are two fan settings, selected with a front-mounted switch, and the Evercool logo on the front of the main unit glows a different colour for each fan setting and a third colour coupled with an audible warning should the water level fall too low. 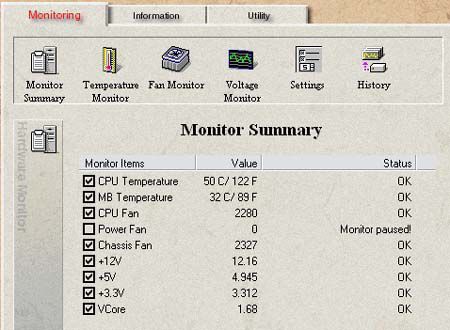 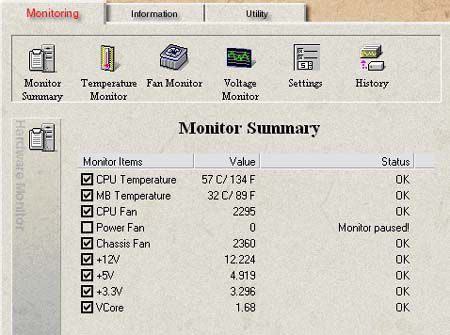 Full Load Air Cooling​
Typical room temperature is 70F/21C.The two fans shown in the Hardware Monitor are the 2 x Vantec Stealths. The Pabst fan on the heatsink runs from a 4 pin connector and spins at around 4000rpm.

When I first booted the machine, the first thing that struck me was how quiet it was. Even on the highest fan setting it was barely audible. Of course I'd lost the rear Vantec fan and the CPU Pabst cooler fan which, although relatively quiet, were still distinctly noticeable when running.

You may recall the former CPU temperatures were 50C on idle and 57C on full load.

So how does this water-cooled super quiet system shape up on temps? 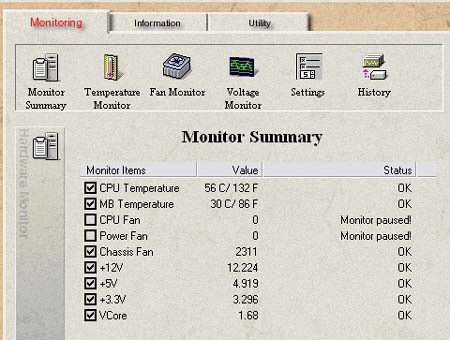 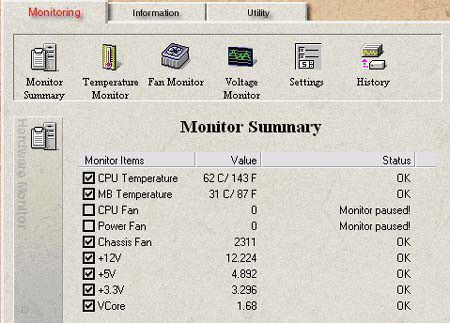 Full Load Temperatures​
So, the system is running around 5C hotter than previously. Disappointing, perhaps, but the system runs stable and is now super quiet.

I wondered if having the main unit mounted externally may have resulted in lower temps. External positioning would also involve longer runs of tubing and the main unit would not be affected by case temperature.

I did in fact intend to try this unit on a second sytem using the external mounting option. However, when I set the whole thing up, it leaked.

Turns out one of the silicon washers had been cut in half when I screwed up the connection.

I have Mixed feelings about this one. It must be the most economical water cooling system there is, it works, it's really easy to install and is very compact - and it runs super quiet. But, it doesn't seem to cool as effectively as more expensive water cooling systems.

If you like quiet and you must have water cooling, this system is for you. However, if CPU temp is the only thing you're interested in, you're probably better off using one of the better air cooling options.