Since fitting an XP3200 to my machine, I’ve suffered cooling problems. At full load the CPU would peak at 65C with case temp hovering around 42C - which is obviously unacceptable.

After searching for an alternative, I found the Gigabyte 3D Rocket Pro Cooler in an attempt to solve my cooling problems. This particular cooler also comes with a fan speed module, allowing you to change the RPM of the fan. The cooler even comes fitted with 4 Blue LEDs which light up when in use, making this particularly attractive to case modders. 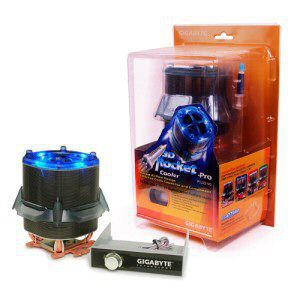 Gigabyte 3D Rocket Pro Cooler​
I was previously using a Thermalright SLK-800 cooler, Pabst medium-flow 80mm fan and Arctic Silver 5. If I left the side of the case off, temperatures were 62C and 40C respectively. A little better but still not good, as I wanted to fit the case side anyway.

Specifications
The Lian Li's original fans have been replaced with 2 x 80mm Vantec Stealth fans to the front (blowing inwards) and 2 x 80mm Pabst medium-flow fans at the rear and roof of the case, exhausting.

Two Vantec Stealths blow air directly over 2 x Western Digital Raptors mounted on their sides and so contribute little to case cooling. The two Pabst fans seem to do a good job with an acceptable noise level.

First, out of curiosity, I tried the stock AMD cooler that came with the XP3200 (aluminium fins and 60mm fan). I was surprised, it gave me exactly the same temperatures as the SLK-800.

It is worth pointing out that the Gigabyte motherboard does not have four mounting holes around the CPU socket, so a bolt through cooler was not an option, I was restricted to clip on devices.

Next up, I tried using 3 x 80mm Vantec Tornado fans, two at the front of the case and one on the Thermalright SLK-800 for the CPU.

That worked quite well, with case side on, CPU temp was 58C at full load and case temp was 36C. But the noise! It sounded like a power station turbine on full tilt! I managed to stand that for half an hour, then took out the Vantec Tornados and put things back as they were.

I spotted the Gigabyte 3D Rocket Pro Cooler whilst browsing different Supplier’s cooling solutions. It looked interesting, cost £30.00, which seemed reasonable, so I thought I’d give it a go.

When it arrived, I was amazed at how huge it was, it resembled a motor cycle engine cylinder and seemed massive. But I noted it was actually quite light. It also looked quite unlike any other cooler I’ve ever seen. 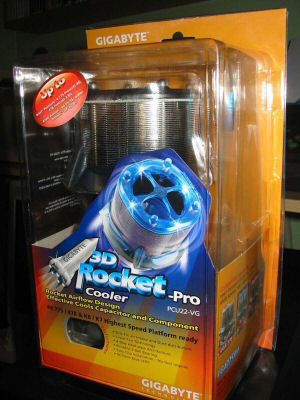 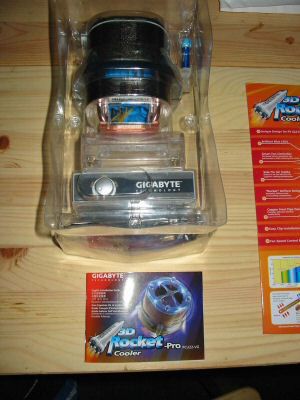 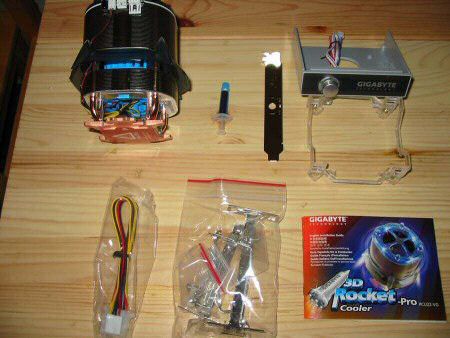 This cooler has fixing solutions for just about every type of processor available at the moment, AMD K7 & K8, Intel P4 & LGA775. Here’s the selection of fixing brackets that come with it: 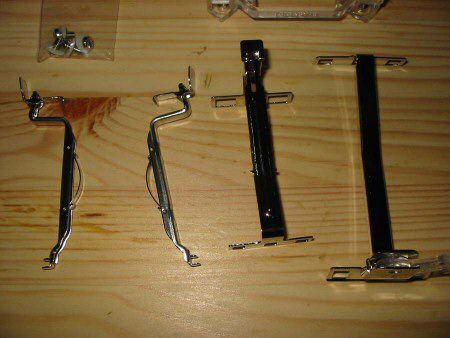 Fixing Brackets​
The Gigabyte 3D Pro works a little differently from conventional coolers. Within the aluminium fins, a fan is fitted that sucks air in through the fins and expels it from the bottom. Around the base of the fins is a cowling that directs the exposed air to any components surrounding the CPU socket. On this motherboard, this means a series of electrolytic capacitors and some voltage regulators. This is a good thing as capacitors and semiconductors last longer when cooled. This setup also allows air blown from the CPU cooler to be expelled easily by the exhausting case fans.

The cooler base is copper and has a copper heat pipe system attached to it, which runs through the cooling fins. Gigabyte claim the heat pipe system will work in any orientation, regardless of the gravity pull. The machine finishing of the Gigabyte Pro 3D is good, with no visible grooves. A better surface could be achieved by lapping, if you’re that fussy, but it looked good enough

Power for the fan comes from a split 4 pin molex connector connected to a lead that plugs into the top of the cooler. A 3 pin fan speed monitor can be plugged into the motherboard.

The cooler also has a speed control that you can either mount on a tray that fits an external 3.5” drive bay or a rear PCI bracket. To fit it to the rear of the computer, you have to take the pot from the front 3.5” tray and fit it in to the rear bracket. I mounted this one on the front of the case, it’s in grey and black with a muted silver Gigabyte legend and knob. If you don’t fit the speed control pot, the fan runs permanently at full speed. 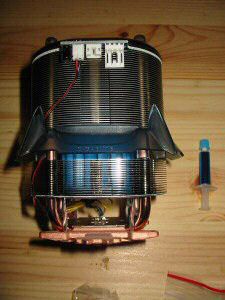 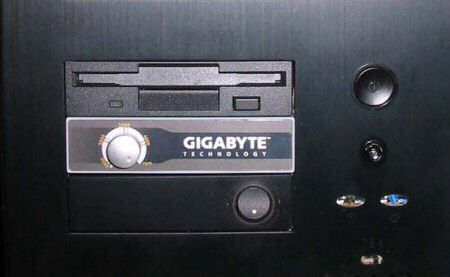 Front Drive Bay​
I used Arctic Silver 5 to mount the Gigabyte 3D pro, but Gigabyte supplied a tube of their own compound if you don't have any AS5.

I found it quite fiddly to mount the cooler on to my XP3200, the clip that fits onto to the three lugs either side of the CPU socket just rests in a recess at the top of the cooler base, and it’s liable to jump out when you’re trying to secure it.

Vision is limited if you’re fitting this whilst the motherboard is mounted inside the case (as I was) due to the size of this thing, and it proved a little difficult to put the first three holes of the bracket onto the socket lugs. But once they were in place, I used a thin flat blade screwdriver and my fingers to guide the other side of the clip into place. Once mounted, it’s secure.

Despite it’s size, it’s surprisingly light and didn’t seem in danger of putting a strain on anything. I wouldn’t go so far as to recommend this thing for LAN parties though, that may be pushing your luck. 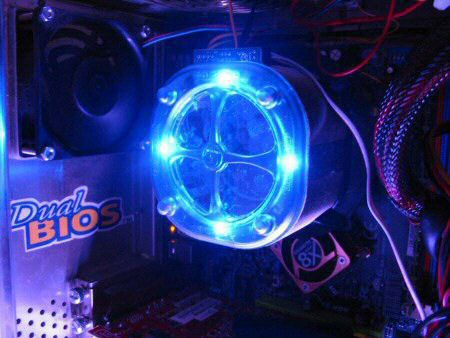 After making all the cable connections and putting the case side back on it was time to fire this thing up and see whether my investment had been worthwhile. This machine is on full load 24/7 as I’m running the United Devices Cancer research program, which utilizes all unused CPU cycles.

I was getting a CPU temperature of 65C. I let it run for 20 minutes, then observed this:

CPU temperature of 47C and case temperature of 37C​
The case temperature is still a little high for my liking, but I can put up with that as noise levels are very low on this setup. All the temperatures taken were with the cooler fan running on full (unless specified). At full speed it makes less noise than one of my Pabst 80mm medium flow fans. On lowest speed, it’s barely discernible. 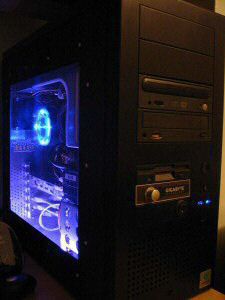 The Cooler installed and running​
Although the installation was fiddly, it solved my cooling problem for £30, and I don’t have a mess of water pipes all over the place. Just as important, my machine still runs quiet.