I think it’s safe to say that the time of real portable music listening has truly hit us. Just take a look around you next time your utilising public transport (those of you with the cash to make your own ways of travel, give it a go just to see what your missing!), and I can guarantee that you’ll spy at least half a dozen people with a pair of earphones stuck into their heads. Usually, of course, with the delightful white cord outside their jackets, so they can show off the fact they possess an iPod to the world. 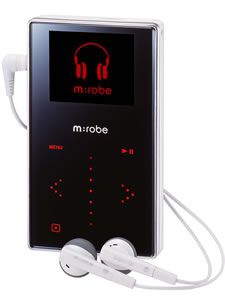 But here come Olympus making there way into the world of the tiny MP3 player with the m:robe MR-100. A 5GB MP3 and WMA player. 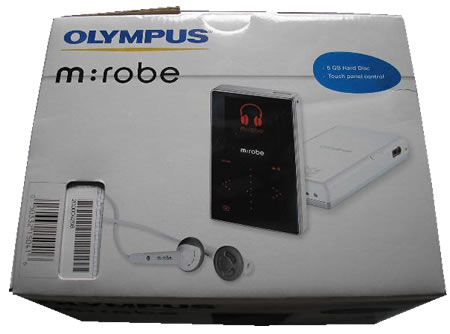 The big selling point about the MR-100 is its aesthetic appearance. With its small, but most certainly well formed design, it’s quite easily the most visually appealing MP3 on the market. The single piece of glass that covers the front of the unit looks and feels almost perfect. There are no poorly constructed edges, obviously Olympus haven’t scrimped on the cost of putting the whole unit together. The back of the unit is metal coated with a touch of white paint, which compliments the pure black front quite nicely indeed. 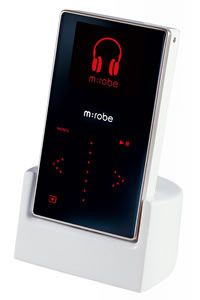 The 12 hours of music playback seems to be a little optimistic, with playback testing resulting in a time nearer to 10 hours. Perhaps the lighting up of the screen takes up more juice than you’d first predict.

Track selection on the player itself can feel quite unwieldy at first, with a not so simple method of backtracking through menus. After a few hours though everything becomes second nature of course, but it doesn’t feel as easy to use right from the off as some other players on the market.

While the system itself performs to the standard you’d expect, the included software simply isn’t up to the job. The software itself will happily rip and sort your music, and all is easily done, even for the most computer illiterate person. The problems begin as soon as you decide to attempt to drag a few albums onto your MR-100. The problem being, you can’t. The only available option is to ‘sync’ your music on your PC with the player itself, meaning that if you have more than 5GB’s of music, it’ll try and cram the whole lot into that little internal hard drive. The only way to go is to actually instruct certain tracks not to be synced, which seems like a bit of an unusual way to go about things. Obviously those who have quite a meagre music collection you’ll have no troubles at all, but those of us who have quite a wealth of music on our hard drives, you’ll face a little hassle. 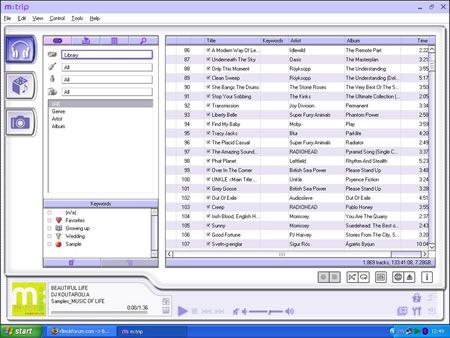 The included earphones, as you’d expect, aren’t really up to the job of long term use. However, they are quite a hefty chunk better than what you usually expect, and perform admirably enough. For those who aren’t used to splashing out huge amounts of cash on speaker kits, and sound isolating earphones, you’ll get along just fine with the included earphones. They fit pretty comfortably in the ear, and do the job of a average priced set of earphones quite well. Much better than the usual starting devices we’re usually left with.

The lack of the ability to create your own playlists on the move (that features restricted to setting them up using the included m:trip software) is a bit of a hefty miss. A lot of people are happy to set up playlists just before use, so they can pick out music that suits their own particular mood. This way, you need to be pretty adept at pre-empting your mood before hand!

The headphone socket is oddly placed on the left hand side of the unit. Therefore, if your connection is one of those that stick out an inch or so, placing it in your pocket can be a little awkward. Not too much of a drawback, but still a bit of an annoyance.

From a purely visual perspective, the MR-100 is an absolute delight. While it may lack the colour screen of the current generation of iPod’s, the lit up touch panel control in particular beats the iPod’s wheel hands down. The device itself performs admirably enough. Sound quality is as good as any MP3 player out there (if a little on the quiet side), and the features on the player itself even rival the likes of iTunes software.

Unfortunately with the difficult to use software included, the MR-100 can feel a little bit of a case of style over substance. Whether you opt for this over another smaller capacity MP3 player is purely down to personal preference. If you use iTunes, you’d be hard pressed to look past an iPod mini, especially as Apple beat Olympus in the price stakes. However for the rest of you it’s a bit of a tight contest between this and the Creative Zen Micro. And I think we’re all well aware which will win visually between that pair… 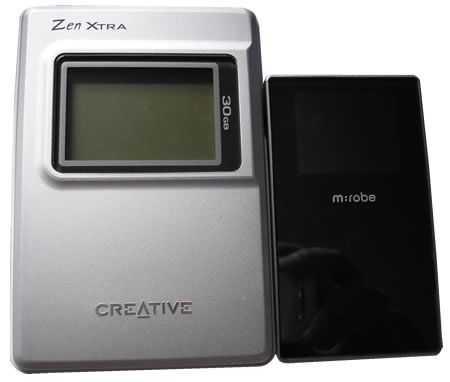