We’re always on the lookout for ‘bang for our buck’. Most of us are more than willing to shop around for the lowest price (something made inherently easy with internet based shopping, and various websites which offer up the cheapest price incredibly quickly), and the all-important bargain. Yet in many circles, the general public seem all too ready to stick with what they know about or have heard of, despite the advice of the more educated. To your average Joe Public, the only way to play all your music on the move without lugging CDs about with you is to get them all on one of those little iPod thingies.

As good as Apple’s iPod range is, I think most of us technically savvy types are well aware that when it comes to pure value for money, they have been lagging behind their competitors in the last year. Creative in particular have introduced the better 20GB MP3 player model in the form of the Zen Touch and Zen Sleek, and now want to push for a piece of the action when it comes to those who don’t require that amount of storage. So here is the Creative Labs Zen Nano Plus 512MB (also available in a 1GB version) which looks set to take on the iPod Shuffle. 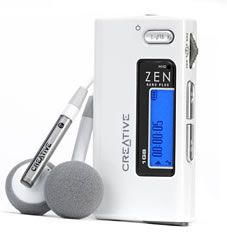 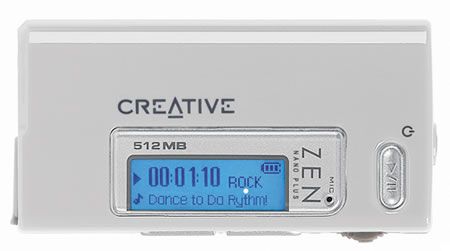 If you are comparng this MP3 player with the iPod Shuffle, the first major advantage you notice, before even listening to anything, is the presence of a backlit display. This allows you to easily flick through and select which song you wish to listen to: a feature noticably lacking from the iPod Shuffle. On the display, you can see what genre of music you are listening to, the name of the track, the time of the track and finally the battery power remaining. It is simple yet effective, which, after all, is what makes for a good product.

Secondly, it shares the same wondrous sound quality that Creative seem to be able to show in every portable audio product. Unfortunately, the headphones which come with the Zen Nano are a little on the chunky side: For ideal sound quality, it is probably worth you investing in some better quality headphones. Having done so, you’ve got something to rival any other portable audio player on the market at a similar price. For such a tiny piece of kit, the sound quality, depth of tone and volume are pleasantly suprising. Easily loud enough to take you away to a different world... or simply to irritate your fellow public transport users!

Most functions are performed via the little 'rocker' on the right hand side of the unit, which doubles as the select button too once you give it a press. Simply put, it is a small wheel that you can use to scroll through menus and track listings, which is also a multi-directional button which you use to select or de-select options. Anyone familiar with any Creative Zen MP3 players before the Zen Touch will be fully aware of the ease of use this offers, and the obvious saving on space when your realise how may jobs it actually performs. This method of navigation does take a little time to get used to, but it’s only a short time till you will be flying through menus in double quick time.

Like the iPod Shuffle, there is no actual ability to create a playlist on the go, so you will need to arrange your music tracks before you put them on the player. However, if while you are out and about you want to change around what you are listening to, you can easily flick between tracks due to the nice little display: the absence of which makes this a little more difficult with the Shuffle.

Should you become bored with the tracks you have put on your Zen Nano, you can always listen to the radio. You are able to preset up to 32 stations, both stereo and mono. The ability to listen to your favourite radio stations on the move, while possibly neglecting the true reason for these flash players to exist, is a nice plus to have, and another vicitory over the iPod Shuffle.

Last but by no means least, the Creative Zen Nano is available in 10 different colours - enough for any taste to be satisfied.

Looking beyond the traditionally high sound quality that Creative seems eager to show off in every single product, there is rather little to criticise. The really appealing feature, apart from the great sound, is the size. For something that is about 20 per cent smaller than an average business card and just over a centimetre thick, the performance is extremely good.

However the Creative MediaSource software that comes enclosed with the Zen Nano Plus does fall down a little. Out of this reviewer’s vast range of CDs, the Creative software refused to rip two of them. It is not too much of a drawback, especially considering the ease in which you can purchase music on the web or rip tracks using other free bits of software. However, it is none-the-less a drawback: one that may affect some people more than others.

Once again, Creative has managed to out-do Apple. With the biggest criticism levelled at the iPod Shuffle being the lack of display, Creative has managed to sneak in a decent sized screen (along with everything else the Shuffle has to offer) and slip it into a tiny and very attractive casing. Despite the fact that the introduction of the iPod Nano may win the battle when it comes to the medium capacity portable audio units; the Creative Zen Nano Plus beats the iPod Shuffle into submission in each and every area. Not by a great deal that’s for sure, but the inclusion of that small screen does it for us.