It feels like the Apple iPod has been around forever doesn't it? Did we really used to wander around with a bulky CD player tucked into our coat pockets, and needing a little bag to carry around if we wanted to listen to a choice of albums? I guess we're all pretty lucky that these little hand held flash drives/hard drives are in such an abundance, and at a wide variety of costs to allow pretty much everyone who wants an easier way of taking their music on their everyday journeys. 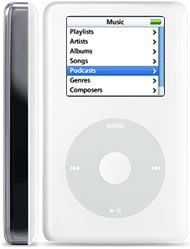 The most instantly recognisable variety has to be Apple's iPod. The sleek white casing and click wheel instantly triggering something in the brain of those who haven't the faintest idea to what an iMac is.

The iPod themselves used to come in two separate incarnations. The one's solely for your music, and one sporting a colour screen so you can view your downloaded photographs on the move. Well now that's no more. Every single iPod released has this capability with this latest generation. 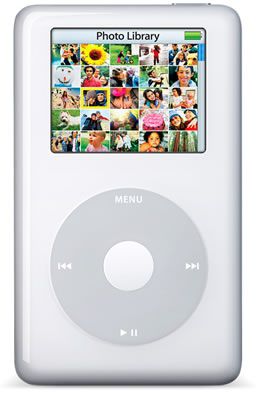 Viewing Photo Thumbnails on the iPod​

Well what can we really talk about the iPod that hasn't been uttered thousands of times? For starters the unit itself is a dream to look at. The white front and the sleek silver backing not only looks the part, but feels wondrous to the touch. Build quality too is to Apple's traditionally high standards, with everything slotting together nigh on perfectly. The wheel itself works very much like the scroller most recently seen on the Creative Zen Touch, and the Olympus MR-100 with the merest gentle touch needed to flick up and down between menus.

The battery levels of previous iPod iterations which stood at around 8 hours at best (though a lot of users complained of numbers way lower) has been improved quite considerably. During our test, a full charge took over 10 hours to get down to the bottom stage, so the 12 hours that Apple claim can't be out of reach to most consumers. They're still lagging behind the rest of the MP3 player world, but they're slowly catching up. 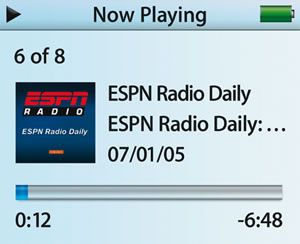 PodCasting
​
Podcasts are a delightful little inclusion too. In the iTunes software there's thousands of free available ‘Podcasts' to transfer right to your iPod. The clever bit however is as you choose and rate particular shows (from shows that cover sporting events, to classical music) iTunes will automatically update your growing collection automatically due to your ratings. A time saver indeed. The ability to listen to a few movie reviews on your way to the cinema can't be praised heavily enough!

As above, the software and the unit handles like a total dream. However, this high performance level isn't totally consistent. The main (and sometimes only) criticism levelled at Apple's range of iPod players is the quite poor sound quality when compared to other players on the market today. Recent iPod generations have seen sound quality improve pretty rapidly indeed, and this new release continues the trend. This time around there's slight noticeable difference at best. The new lossless encoder to import music from CDs certainly helps things along, and performance can't be criticised too heavily at all. The included earphones don't help matters as always, so you'd be well advised to add the cost of a decent pair for extensive use to the price of your iPod itself.

The iPod is the most stylish MP3 player on the market. Of that there can be no doubt at all. The fashion conscious seem pretty reluctant to try out any other MP3 player on the market, and who can really blame them? With the exception of Olympus' recently release MR-100, most players are pretty unattractive items. However, the poorer sound quality which the iPod's have constantly suffered from when compared to the likes of the Creative range of players is still witnessed, if becoming ever more slight as time progresses.

It's like most things in life, music too in fact. The iPod is your Madonna or U2. The old style icon, which everyone who's ‘in' seems to adore. Despite other bands (Radiohead for example) being quite obviously ‘better', they simply can't win over the style conscious who don't want to differ from the rest. A bit of an odd analogy I'll admit, but seems to give the idea to its best.