None of 'em. They show in Disk management (Admin tools) where I can access files and format them, but not in Explorer.

I've turned off the power saver options in Device Manager > USB Root Hub and have rebooted several times but still no luck. The USB sticks were recognised in Win 10 at one point but no more.

I've just thought this may be a Kaspersky thing - possible?

And while I'm having a pop at Windows 10 my Gears Of War 4 game no longer works. It did do at one stage but it doesn't any more. It's meant to be playable both on Win 10 and Xbox One S. I did get to one point where it appeared to be downloading an update but after three days of seeming to download in an endless loop and constantly resetting to zero and starting again, I gave up.

Does Disk Management show a drive letter next to the USB volume name? If not, can you right click the volume and then go to "change drive letter and paths" - it just may not be automatically assigning a drive letter. A screenshot may give some more info

Yes, the USB sticks are assigned a drive letter, in this case drive 'I'. It also won't read SD memory cards in a USB card holder.

My bedroom computer - Win 7 - has no problems with sticks or cards. That also has Kasperskys on it (they allow you 2 installs with the Barclays freebie) so I think it unlikely that's causing the problem.

I used to have an old external hard drive caddy that would keep doing this. I had to remove/uninstall all the USB Root Hub's and Superspeed Hubs via device manager if I remember correctly, and reboot to get it to work again. Have you tried that?


Sorry if it obvious but have you tried a difference USB port?

Or you could try one of these tools. (I've used both myself many times)

How strange - hopefully @V_R's idea will do the trick.

If you go to "I:" manually in the explorer address bar, can you read the USB drive ok?

Thanks for the replies people. Will try V_R's suggestion. Mucks, it's an MSI motherboard and always prompts me if there are any updates with its 'Live Update' thingie. But I did check and all is up to date.

Ian, not sure what you mean by this:

If you go to "I:" manually in the explorer address bar, can you read the USB drive ok?
Click to expand...

Will keep this thread posted if any success.

floppybootstomp said:
Ian, not sure what you mean by this:
Click to expand...

If you click in to the path bar in Windows Explorer, you should be able to manually type in "i:" and it'll see if it can browse that drive - just a way to check if the system can indeed see it: 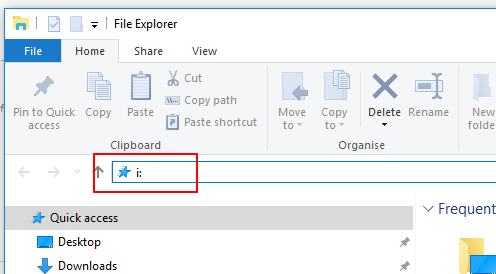 I have now tried everything suggested in this thread - all to no avail. USB memory sticks and memory card holders connected via USB are not seen by Windows 10. I have USB3 and USB2 ports at front and rear of the PC, all of which, oddly enough, recognize my camera when I connect that via USB.

I have tried plugging in USB sticks in all spare ports - no good. My mouse and keyboard are also working fine through USB ports.

On top of that Gears Of War 4 (purchased as download for Xbox One) has stopped working on the Win 10 PC. The game is listed, as are all the in game achievements so far so Microsoft do seem to acknowledge I own the game, it just doesn't work. When I click start it gives me an error message.

I've reported the problem to Microsoft via their feedback service but I very much doubt that will come to anything.

In another thread I posted that I intended to do a clean install of Win 10 to try and overcome these problems but having listed all the software I have installed I realized it would take a very long time and a lot of effort and I really don't fancy going through all that.

I have also installed an MSI motherboard facility named 'Speedy USB' or similar to see if that would help - it didn't.

Feeling a bit cheesed off with this, no problems with Windows Seven or several Linux Distros, including Mint and Bluestar, just Windows Ten.