Games being played mentioned in despatches

Over the last few years I seem to have developed a fondness for RPG’s and to that end recently finished Dragon Age Inquisition. I did leave a few side quests incomplete but now I’ve finished the game’s main goal they just don’t have the same interest for me. I may play it through again with a different character but not just yet. Fine value for money, I purchased it in a sale from EA (Origin game client) and it kept me entertained almost for a year on and off, 196 hours playtime.

I’ve gone back to Kingdom Of Amalur: Reckoning and have been enjoying that. Have also tried Divinity Original Sin enhanced edition, wasn’t too impressed with that and Divinity Original Sin 2 which seems to be a big improvement on the first one but haven’t played much of it yet. And Pillars Of Eternity which so far seems ok but early days yet.

Then there was the disappointment that was Battalion 1944, was there ever a game that promised so much then didn’t deliver? A damn shame. Steam refunded me very quickly on that one, they must have had thousands of requests for refunds on Battalion 1944.

I bought Subnautica some time ago then read it had a makeover so I tried it again. Yes, it looks better and no, I still don’t like it.

And Humble Bundle keep mailing me with offers and for once I took them up on an offer. I just bought 17 Japanese anime type games and, I think, some virtual novels, for £8.84. I suspect some of them might be a bit pervy but I figured for that price the law of averages says that there must be 2 or 3 at least out of 17 that will interest me.

I re-started Child Of Light Again, have been enjoying that, it’s a bit cutesy but it holds my interest.

Finally, I’ve lately become addicted to Trackmania. I bought Lagoon on the PC (Ubisoft/Uplay) and Stadium on the Xbox 1 but both games show up on the PC which is a bit good. Out of six levels I’m up to level 4 on both versions where things have become decidedly difficult.

Every single one of the games mentioned above I’ve purchased in a sale btw, didn’t pay full price for any of them.

May just play NIER: Automata again, that was a good game. And I did pay full price for that one so methinks I should play it again to get my money’s worth.

Oh, and still playing Call Of Duty 4 online, probably will be forever….
Ad

I'm glad you got your money back for Battalion 1944, that was very disappointing.


floppybootstomp said:
I did leave a few side quests incomplete but now I’ve finished the game’s main goal they just don’t have the same interest for me.
Click to expand...

I'm the same when it comes to RPGs. When I played Skyrim I got almost the whole way through the main quest and left it unfinished for over a year while I did side quests. Ian thought I was mad and kept taking the mick, but when I did finally finish it I lost interest in playing more. C'est la vie

I was emailed by Green Man Gaming telling me Far Cry 4 was on sale for £8.50 and as I'd heard from other people owning the game that it was a lot better than Far Cry 3 - which I didn't think much of - I thought I'd take a chance.

I paid Green Man Gaming over an hour ago for the game, it's listed in 'My Purchases' on my profile page but I still haven't received a code to unlock the game in the Uplay Ubisoft gaming client

And while I'm being a moany git a while ago this year I bought one of their mystery bundles of 20 games and amongst the unlock codes I received was one for, and I quote 'Origin: Battlefield 1'. I thought it unlikely I'd get that game cos this bundle of games was dead cheap and sure enough when I enter the code with Origin it tells me the code is erroneous.

So, a double moan for Green Man Gaming, I will contact them and ask them what's going on but not right now, me no in the mood.

I did notice on my profile page that they have this pie chart showing which games I've played the longest. I do like a bit of Borderlands 2 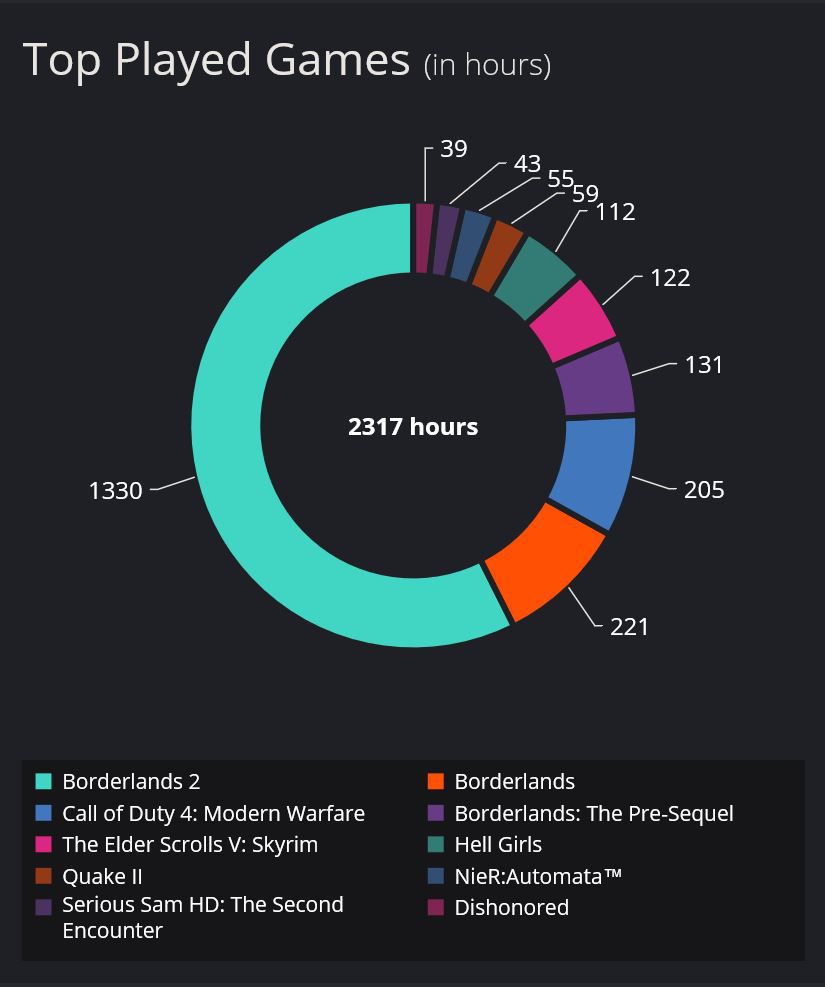 Cor that's a lot of hours in Borderlands 2!

When I first played it, I really didn't enjoy it (I didn't give it a fair chance I suspect) - but after being persuaded to play it as part of a 4-man co-op team, I loved it. Are you playing it single player? I've just checked and I've got 70 hours in game, which is a lot for me.

BTW, it sounds like a Borderlands 3 is currently in the works

Sorry to hear about the problems you've been having with Green Man Games @floppybootstomp, did the code for Far Cry 4 come through in the end?

I should really give Borderlands 2 another go sometime, I just didn't get in to it last time.

I now have Far Cry 4 installed within my Uplay gaming client.

Top marks to them for being responsive and being contactable albeit only through emails, their telephone number goes straight to answerphone.

Bottom marks for them relying on just one browser for their download service to function.

Observation: No, I'm not happy with either of the names I chose for my Ubisoft and EA/Origin accounts and while I think of it, haven't been happy with the name 'floppybootstomp' for a long time now. Which is probably why, early on in this life, I decided against ever getting any tattoos.

I'm sorry to hear you feel that way. I will pass your feedback on to the relevant department.

Am I being unreasonable? Grumpy? Or is my stance justified?

What a PITA! Making anything that is not widely compatible isn't good business practice. Optimising a service for a browser is one thing, but not functioning properly for other browsers is completely different, and totally avoidable. I think your grumpiness is justified

Have you had a chance to play Far Cry 4 yet?

Oh and on the subject of names, I agree with David Mitchell that names are irrelevant:

you have earned the right to be a grumpy old man, you collect a pension ... growing old is mandatory, growing up is, optional.

is that really your acc name

Becky said:
Have you had a chance to play Far Cry 4 yet?
Click to expand...

It really is quite enjoyable and I reckon the real test of a game is if you want to keep firing it up and playing a bit more - FC4 passes that test with ease.

Bit of an update time 5 months down the line.

I've gone a bit retro and am currently playing, mostly:

1) Painkiller, the whole series, I only needed to buy one to get the whole set and it was reasonably priced. It's a mindless shoot 'em up with mild puzzle elements and is ideal in 30 minute bursts.

2) Re-playing Nier Automata after they released some DLC which I bought. It's been about an 8 month gap since I completed the game (on normal setting) and I must say it was a very pleasant surprise returning to it. I do like this game a lot in fact I'd say it's a contender for 'best game ever'. Not sure why, I just think it's the whole atmosphere. A player has to be at a certain level to access the DLC so I thought I may as well play through the whole game again.

And that's about it really, Humble Bundle are currently giving away Guns Of Icarus which I've downloaded to Steam, no idea what it's like and on GoG I've just bought 2 old games - Shivers, a Sierra point and click and B-17, Flying Fortress which I'd always wanted to try since it was first released in the late nineties. And at £1.09 and Win 10 compatible I thought I'd give it a try.

Haven't tried Shivers or B-17 yet.

Don't really fancy any current releases except maybe The Crew 2 for Xbox One which cost £50 on release but GAME are currently selling for £30.

Oh, and Dragon Age Inquisition have some DLC now, that's a game I enjoyed a lot, tempted by that, but at £25 that's more than I paid for the full game.