PCPerspective take a look at the new Vega Frontier Edition in CrossFire mode - if you're considering buying this new card, it's worth a read to find out the current performance (this will likely improve with some tweaking of drivers):

The current state of CrossFire for Vega isn’t amazing me. Scaling at 2560x1440 is abysmal with only The Witcher 3 going above 20% improvement by adding the second card. At 4K we do see a better result, ranging from 54% to 84% depending on the game. Hitman in DX12 was the outlier though, with zero scaling, indicative of the continued concerns over the new API and the pressure it puts on developers going forward.

Even if scaling works when looking at average frame rates, the frame time variance of many of our results are higher than we want to see. Take Witcher 3 as the perfect example – we see great scaling from the single Radeon Vega Frontier Edition to two in CrossFire but at the same time we have frame to frame variance going well above 10ms at the 95th percentile. That is a straight up bad experience, and though its front weighted in our testing scenario in Witcher 3, it was continuous in Dirt Rally and GTA V. As we stated at the outset, getting multi-GPU scaling correct is extremely difficult.
Click to expand... 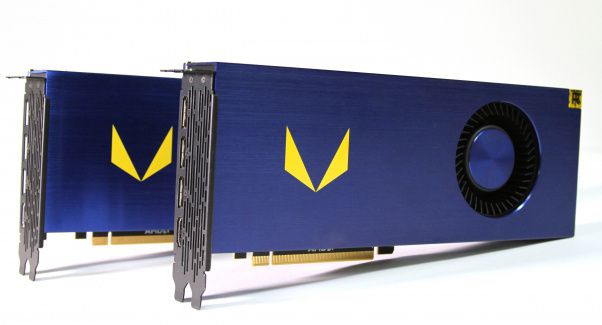 They are fugly cards!

I kind of like them, in a weird way! They look pretty industrial though.
Ad

V_R said:
They are fugly cards!
Click to expand...