Have you ever wanted a program that could replace both the Task Manager and msconfig? Me neither, but here we have one, from LIUtilities. Right off the bat, the program may seem a bit daunting, and for a beginner, it is not exactly the easiest thing to use. You have to have a general knowledge of what processes, threads and priorities are, as well as the general operation of Windows as an operating system. 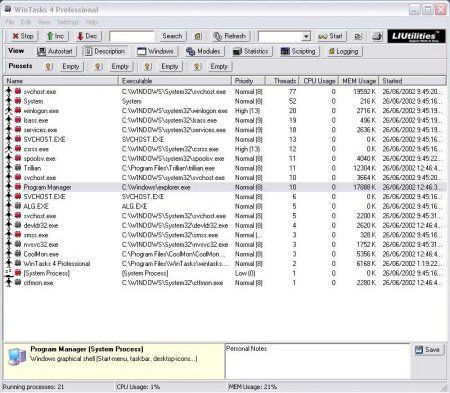 Main View​
The easiest way to describe WinTasks would be as a front-end to both the Task Manager and some features of msconfig (System Configuration Utility). WinTasks does just about everything from monitoring each individual process running on your system (much like the Task Manager), and graphing your CPU usage, but it does more than that. It also logs everything that’s going on in your machine, allow you to change the priority of processes, and includes a scripting language. 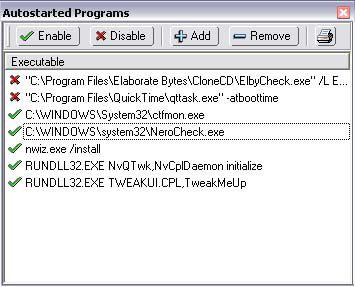 Autostarted Programs​
Minimum Requirements:
These are the requirements that I obtained from the manual. However, on their website, they claim it also supports Windows 95 and ME. The only platform I tested it on, however, was Windows XP, so I cannot attest to the functionality of the program on 9x based operating system. I can tell you that many functions will not work in 9x (and some not in NT). If you want the best functionality, you’ll have to either run 2k or XP.

I have to say, I was a bit disappointed with this product at first, but then I discovered the integrated scripting language. It allows you to do anything from changing the priority of your CD burning software as to avoid buffer underruns, and can even help prevent those pesky errors while defragmenting and running a scan disk.The language is simple enough, and resembles Visual Basic, both in its simplicity and structure. As demonstrated in the screenshot below, I made a little script which will start the calculator when notepad is open, and close it when notepad isn’t running. Not very useful, sure, but it’s just to show you the variety of things you can do with the scripting. 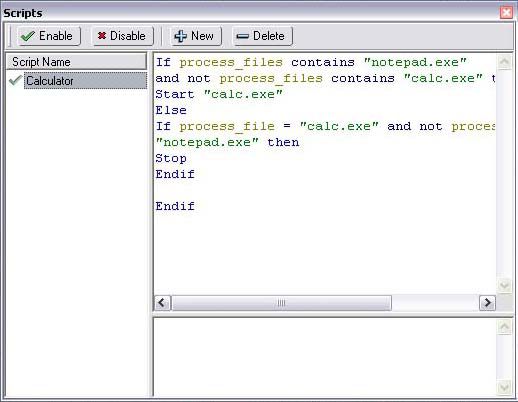 I can’t say I was as impressed by the other features of the program. For the home user, they are of little use. For professionals, such as software developers, this could be a very useful tool. As mentioned earlier, you can view what dlls each process is using at any given time, and many other features. This could be useful for a developer as he can tell where possible memory leaks are coming from, and further optimise his program.

While looking at the Trillian exe, I noticed that there were many hidden components running at once (some that shouldn’t be running and only hog up your memory). You also have the option of printing pretty much every bit of information that is given to you on the screen, which is an interesting feature for IT people who want to know exactly what’s going on in their system and when. Since it does keep a 24 hour log, it’s simple to pinpoint where a memory leak began, for example, and what may have caused it. This allows the administrator or software developer to go in and fix the problem, and effectively keeping a smoothly running system. 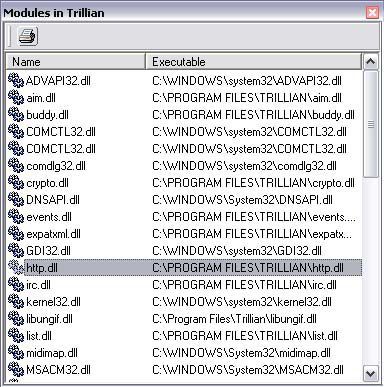 The main problem of this program is that nothing is automated. On their website, they show how you can detect memory leaks and other useful things, but it is of little use to beginners, as it is still quite complex. If there were some automated tasks included, it would have been a lot more helpful, and I would have reviewed it more favourably. As it is now, you basically have to deduce everything by yourself.

Other than the scripting, I found this program extremely useless for the average user, especially considering the robustness of the Task Manager, which suits most people’s needs just fine. Where this program might be useful, is in the professional sector, and even there, it’s quite expensive for what you get. On a final, note, I thought I’d mention the included documentation, which is better than I anticipated. As it is only a PDF, I was expecting an installation guide and that’s about it. I was rather impressed to see that things such as processes, dlls and threads were explained in detail, even though there were several grammar mistakes. It also includes screenshots and explains each part of the program one by one.

It would have been more interesting, had all features been supported under Windows 9x, since it lacks a program such as the Task Manager, and that’s probably why it doesn’t support those features. Somewhat of a catch-22, if you will.

Overall, for home users, don’t waste your money, especially not on the Professional version. There is a Standard version as well, and it is half the price, but it doesn’t include such features like logging and scripting, the only real unique feature of this product.