For quite some time now, aluminium cases seem to be slowly replacing the standard steel cases we all know and love (well, some people do ...seriously). Lian-Li has been the front-runner in the crusade to make aluminium cases mainstream, they’re doing a pretty good job at it so far. With the high-quality workmanship and features that they put into their cases, it’s no wonder people are adopting them so quickly. 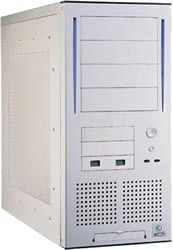 At first glance, the case is aesthetically appealing. The brushed aluminium look is great, and pictures do no justice if you haven’t seen one of these in the flesh before. The included window on the side is ideal for modders, as it saves you the trouble of using a Dremel to put in your own window (unless you really like that), and as a nice touch, Lian-Li added some blue LED light strips to the front, which give it a rather futuristic look.​
Specifications
Another feature that a modder will usually add is the top blowhole, complete with 80mm fan. The fan grill isn't designed for the best airflow, but looks rather subtle - a good or bad thing depending on your performance/aesthetics balance.

Blueprint of the 6085T​
I only have one complaint with what is included in the box, and it’s with the two aluminium floppy bezels. They didn’t fit my floppy drive, and I’m not the first to have this complaint. This should be an issue Lian-Li could address with future products (as the bezels are also sold separately).


Features​
Lian Li include some excellent features in the cases, and this is no exception. There are 2 x USB 2.0 ports on the front of the case, which are useful for plugging in the occasional peripheral when needed (i.e. Digital Camera and USB Drive). One of the 3¼" drive bays is taken up by an LCD Thermometer, with two channels - which is extremely useful in measuring system temperatures on vital components.

A total of four fans are installed around the system, two at the front of the PC (sucking air in), one mounted on the top of the case (blowing out) and one at the top rear of the case (again, blowing out):​ 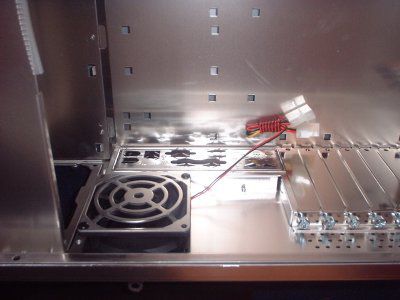 Top Fan - removing hot air from the top of the system​ 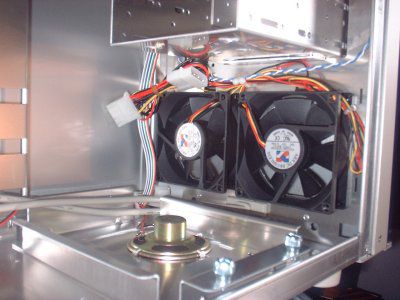 The installation is as easy as can be for a case. I had no issues mounting my motherboard, nor any of my components, and that’s really the main issue. The removable motherboard tray does wonders for the installation, and it should be a standard feature on all cases. There are even thumbscrews, like on everything in this case, to remove the motherboard tray, making it even simpler. I did have an issue however, with the little mounting pegs for the motherboard, as they were quite hard to push them in completely, and my PCI cards were thus not lining up properly, but it definitely doesn’t make this case any less great.The toughest part about the installation was removing the aluminium piece that was covering the window, and that’s not saying much, as it was quite simple to remove.

The case itself is spacious, and nice little touches like rounded edges make it a pleasure to work with. I was also surprised to see the edge protectors that were added, further preventing you from cutting yourself accidentally. With all components installed, you’ve still got tons of breathing room, and with the included zip ties, you can tuck a lot of those wires in the back of the case, increasing airflow and reducing temperatures.

The case itself is very sturdy, and quite lightweight, compared to my old case. It looks aesthetically pleasing, and as I mentioned before, the brushed aluminium looks much better in person. To be noted is the etched design on the window. As much as I tried to scratch it off, it just stuck to the window, which is proof of Lian-Li’s dedication to good workmanship.

The wiring of the case is excellent, and everything is already done for you. From the lights on the front, to the fans, and the fan control, you just need to plug the headers into your motherboard. My main complaint about the wiring is the front-mounted USB ports. An excellent feature, but the lack of documentation makes it quite difficult to find where each wire plugs in. The labels are not the same as in the manual of my Asus motherboard, and I would have liked to see something regarding this. The cables themselves are quite nice, though, and they’ve ran them around the back of the case, surrounding the tiny headers in a grey wire loom.

I was happy to see that Lian-Li had included two aluminium floppy bezels to cover the ugly white drives, but I encountered one major problem...they don’t fit my drive. As I said earlier, I’m not the only one to encounter this problem, and it’s something Lian-Li should consider in future models.

The case runs considerably cooler than my old one, thanks to its four 80mm fans, a great plus for any overclocker. Also to be noted is that I put one temperature sensor (from the front LCD displays) in my CPU heat sink, and the other in the middle of my case, near the motherboard - letting me know if things will get too hot inside the case.

The fan speed control mounted to the front is a nice addition, and I do notice a difference between the three settings. The case temperature goes up several degrees when going from level 3 to level 1, however the CPU temperature doesn’t really budge. While we’re on the subject of fans and temperature control, I thought I’d mention how nice it is to have an integrated blowhole on the case. As we all know, heat rises, and I think more cases should have a blowhole like this, as it really helps push that hot air out of there.

Even though it is quite expensive, and there are a few problems with the case, I wouldn’t have an issue recommending it, to newbies and the hardcore overclockers alike. If you want ease of use, this is the case for you. It has thumbscrews for everything from the PCI slots to the side panels, a removable motherboard tray, and a spacious interior.The exterior is beautiful, and the finish is perfect. The lights in the front look really cool at night, and the included temperature probes are a nice addition.

My only real gripes with this case would be the lack of good instructions (especially for the front-mounted USB ports), and the floppy bezels (which were just thrown in for good measure, but it still should have fit my drive). It would have been nice had there been an included power supply with the case, as competitor Antec does, but I understand the price would have been astronomical, as it already is quite high for a case, but well worth it.

Overall, this is a very nice product, and I recommend it wholeheartedly. I have to say that Lian-Li has done it again. They’ve made a beautiful case, which is both functional and easy to use. What more can you ask for?