In the past few years, Maxtor has quickly become a brand of choice for quality hard drives. Users choose them for their superior performance and durability. Even though IBM was once king, Western Digital and Maxtor seem to have replaced it as the kings of the storage world. I’ve been using Maxtor drives for almost two years now in my main machine and I’ve had no problems with them whatsoever. They’re silent, perform well and have no durability issues like certain IBM drives once did. Keeping with the trend, Maxtor pumps out there latest and greatest for the desktop, the DiamondMax Plus 9 line of drives, and they’re certainly no slouches. 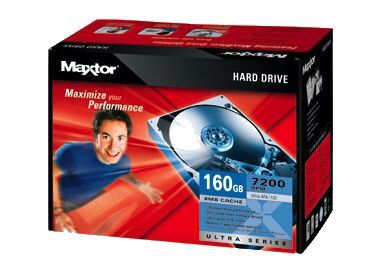 Included Items
Maxtor include some metal adaptors which allows you to hook these up into a 5.25” bay. This was especially interesting for me because of the location where my hard drive cage is in my case, there’s only room for two drives. One slot is occupied by a drive and the other by a LCD thermometer that has probes running from the back of it as well as a small circuit board. There was obviously no way that I was getting rid of this, so I hooked it up into a 5.25” bay since I had two available. The drive was packaged in thick foam, as is usual for hard drives - this wasn't going to damage in transit easily.

Maxtor is the only hard drive maker currently producing ATA133 drives, even though this is a feature all modern motherboards support. What’s interesting about the ATA100 and ATA133 specs is that it’s all theoretical bandwidth. Sure it’s possible, but there’s no drive that even surpasses the ATA66 standard, so what’s the use of wasting your time with ATA133. Of course, if you want to set up a RAID array, it’s great to have extra bandwidth, but for a single drive, you don’t need these new specs because drives just can’t pump data out at those speeds. This is a common problem in the computer world. The specs are advancing technologically, but the actual hardware can’t take advantage of this new technology. Maybe the other drive makers are waiting for Serial ATA.

Maxtor seems to want to flaunt their silent motor design, and I do see a slight improvement in the noise level when it’s idle. It is however a tad louder when seeking. This is normal, of course, as it’s a bigger drive. It makes a real cool sound when spinning up, but other than that, I can’t hear a thing. The only time I hear it is if I put my ear up against the case, when seeking, and during bootup.

Another Maxtor innovation is the fact that their drives have the best per-platter density in the business. They managed to achieve an 80gig per platter density, so amazingly, this drive only has 2 platters. If you compare this to other makers, which usually have about a 40-60gig density, it’s quite a feat.

The installation is pretty much identical to any hard drive, except for the fact that I had to screw on these metal adapters so that the drive would fit into a 5.25” drive bay. No big fuss there. If you’ve ever installed a hard drive before, you should have no problems. If you haven’t, just follow the instructions.

Here comes the juicy part. Both the 80 and 160GB drives performed almost identically so for reference, we used the 160gig drive when benchmarking. I compared the brand spanking new 160gig drive to my old 30.7gig Maxtor 7200rpm ATA66 drive. The benchmarks I used were HDTach 2.61, PCMark2002 and Sandra 2003.

If we take a look at the HDTach benchmark, we notice very quickly that this drive is a great performer. Important things to note are the average read speed of 43042 kb/sec as well as the access time of 13.1ms, which is higher than Maxtor’s advertised 9.4. This is however a real-world benchmark, and you’ll notice that the score is much lower in Sandra, a synthetic benchmark. Another thing to notice is that it maintains its speed very well from edge to edge of the platters, even though there are a few spikes here and there and it seems overall erratic. 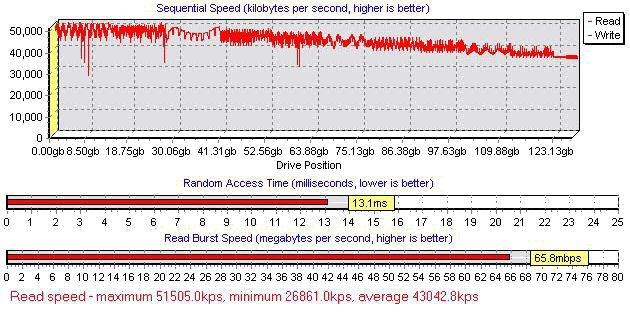 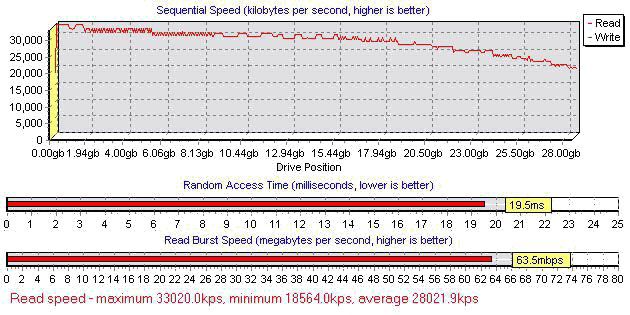 Now, let’s take a look at Sandra. Here we can note that it got a score of 31417kb/sec, which is on par with a similar drive that is equipped with 8MB of cache. This shows that there isn’t a huge improvement to be had with the extra cache. Also, the average seek time is estimated at 6ms, much lower than both Maxtor’s and HDTach’s readings. 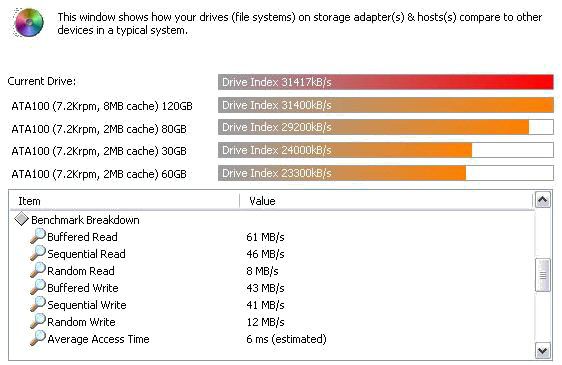 Finally, I decided to compare both drives in PCMark2002.

We notice here that there’s really no competition between the two drives. However, the test isn’t exactly fair because the 30gig drive was almost completely full. We can still say that the new 160gig drive definitely has a performance advantage. One odd thing is how low the 160gig drive performs in the “cached file read” test. I ran it twice and got the same results. This is the area where you’d really see the benefits of 8MB of cache. Also notice that these speeds never go over the 66mb/sec barrier, which supports my argument that ATA133 is a useless spec.

Once again, Maxtor pushes the limits of hard drive technology with its new line-up of DiamondMax Plus 9 drives and in our tests, they definitely have a winner on their hands. In the Sandra test, we noticed that it performs on par with a drive that is fitted with an 8MB buffer. I’d be curious to see how a Maxtor drive with 8MB of cache would perform and how big of an improvement we would see. Overall, a great performer and I wouldn’t hesitate to recommend it for anyone seeking a new hard drive with a huge amount of storage.