For a while now, those who wanted a 5.1 sound system for gaming but were on a budget had very few choices. Then, Logitech came out with their Z series, which has some budget 4.1s, the Z-540s, but lacked the 5.1s until a few weeks ago, when they were released. There are many other smaller manufacturers, such as Cyber Acoustics who also make similar products, which aim to offer descent sound at a competitive price. 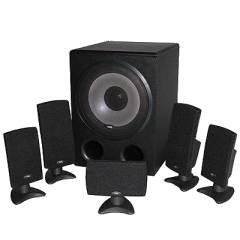 CA-5001 Set​
I never really knew what kind of products Cyber Acoustics offered until I got the chance to review these speakers, so it was a whole new experience for me. I had heard the name once or twice, but that was about it.

Specifications
There’s nothing really out of the ordinary here. The power rating is for all 5 speakers and the woofer put together, so I imagine the individual rating would be something like 8 watts for each satellite and 40 for the sub, or something of the sort.

Included Items
One interesting thing that was included here, was the Y-Adapter for video game consoles, and it’s the first time I’ve seen speakers include this. It’s quite a useful speaker for those who hope to use this on their PS2, XBox or whatever, and is something more manufacturers should include with their “gaming” systems. Other than that, everything is standard. I really liked that the cables for the rear speakers were especially long, because the only location that I can place them in my office are several feet away, and the cables reached there with no problem, unlike my current Logitech Z-560s.

The only real thing to discuss here is the volume control, which is mounted on the front right speaker, like most systems, as well as a fade control. However, it would have been nice to have a power button there as well, as the only one available is hidden behind the subwoofer, and it’s a pain to have to reach back there to turn them off.

The front speakers feature 2.5” coils, and the rears feature only 2”, which is nice, considering the fact that they could have gone the lazy way and made them all the same. The centre channel, essentially, is a rear channel turned sideways.

The included attachments to hang the rear and centre channels to the ceiling are a welcome feature as well. Especially considering the fact that not everyone has the flexibility of having stands or a shelf behind their computer to put the rears for optimal placement.

Installation was a breeze, as all the cables and I/O scheme behind the subwoofer are color-coded. Even a very computer illiterate person could set this baby up. My only complaint, really, is the included instruction manual (if you can call it a manual). It’s more of a sheet, first of all, and it’s quite lacking in information. Still, as I mentioned, it doesn’t take an electrical engineer to set these up.

All right, before I get into this, I want you to keep in mind that these are budget speakers, and you obviously get what you pay for. These are not the best speakers out there and the Logitech Z-680s still hold the crown, but these are excellent for what you’re paying. I guarantee you won’t find many 5.1 systems at this price for what you’re getting.Now that that’s over with, let’s talk performance. First off, I was quite surprised with the satellites. I’m not a fan of coil speakers, as I’ve heard some really bad ones in the past. If you want to crank the volume up high, though, don’t expect these to tough out, as the sound distorts once you get over about 70% volume.

Even though the satellites are excellent for such a system, the subwoofer is the real problem, and it ruins the entire system. At first glance, it looks very nice, and seems quite powerful. It’s got quite a good about of power, but the crossover frequency is the real problem. It seems to take mid-range frequencies that it shouldn’t, and the result is an awful sounding muddy sound constantly coming out of the subwoofer. It wasn’t at all pleasant hearing a vocalist’s voice coming out of the subwoofer at certain times. Keep in mind, the woofer was on the lowest possible level at all time.

This didn’t happen on all types of music, however. I tried out everything. I started off with some Supertramp, as I think it’s great music to test out speakers with. It encompasses all the ranges you look for. The lows or the drums, the mids of the vocals, and the highs of the synthesizers and other instruments. It didn’t sound too bad, overall, but the woofer still sounded muddy on some of the songs. Anything with a persistent rhythm guitar was totally ruined, as the subwoofer would most often pick up the frequency, and it shouldn’t. Some songs were quite good, though, as the satellites helped a lot on songs that have very little lows. Music like Tenacious D’s Tribute, as well as some classical music. Almost any form of rock sounded washed out, though, and the listening experience was totally ruined by the sound.

Games were different, however, and I would really only recommend these as budget gaming speakers, as they’re useless for 80% of the music out there, especially popular music. During gaming, a lot of the sound isn’t really crystal clear, and you don’t pay attention to the subwoofer. Besides, a bit of extra oomph can’t be that bad.

One other complaint I have about this system is the lack of an integrated power supply inside the subwoofer. A lot of companies are now starting to include this feature, and it’s extremely useful. With this, the AC adapter is blocking 3 plugs on my power bar, when my Logitechs only block one, due to it’s integrated adapter, but of course, they cost a lot more.

If you’re on a budget and want a 5.1 sound system for gaming that has a good feature set, then you might want to consider looking at the CA-5001s. Such inclusions like the Y cable for plugging the speakers to a video game console or other two-input audio system, is a great plus if that’s what you want to use this for.

However, if you want a budget system for your computer, and want decent sound quality for a good price, sure, you can pick these, up, but for music, I’d recommend against these, only because of the subwoofer. The Logitech Z-640s are much better 5.1 budget speakers, in my opinion, and the woofer packs a lot of punch and remains crystal clear. However, it doesn’t include a few of the options that the CA-5001s include (such as the Y-adapter, like I mentioned earlier).

Overall, though, for the price, there’s not a whole lot out there that can compete with this system, so in that respect, it’s still a decent buy, just don’t expect the best audio fidelity.