All case modders know that Antec has long since been the king as far as flexible, resistant, easily moddable cases are concerned. Of course, when they decided to update their Performance line of cases, heads turned, especially among the hardcore modders who live and die by Antec cases for their works of art. Antec sent us the Performance Plus 1080 for review, and it lives up to all expectations, and manages to blow the competition out of the water.

Antec Plus 1080​
At first glance, it seems like just another plain ‘ol beige case, but that’s an incorrect assumption. Sure, it doesn’t have the polished exterior than the Lian-Li I reviewed a few weeks back has, but obviously Antec is targeting a much different market here. On the exterior, we can note that there have been some changes from the previous Antec design that we all know and love. First of all, the faceplate has been changed, and the grooves were removed. More importantly, however, Antec added two extra LEDs to the front which you can use for anything you want (be creative). As well, there are two front-mounted USB ports as well as a Firewire port, which connect to the respective headers on your motherboard. 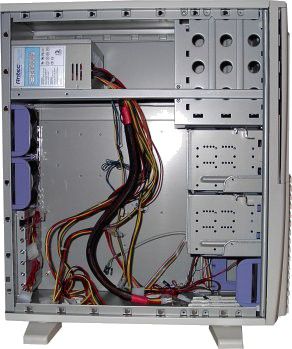 Inside View​
One interesting feature is the fan that’s mounted in the side panel. The grill isn’t exactly designed for the best airflow, and it would have been better to install the blow hole on the top, but I’ll talk more about that later and the issues I encountered.

There are three fans included in the package, which are already installed. Two are blowing air out of the case, and the third is installed on the side panel. In my opinion, the side blow hole is a good idea on paper, but in practice is counterproductive. Lian-Li had the right idea of installing it on the top of the case as we all know hot air rises. Since the door is extremely easy to open, having this fan installed complicates everything. You have to open the door a tad, then unplug the fan and finally remove the side panel in order to access your case. It just seems a bit awkward, but I suppose the extra cooling is still not a bad thing to have, even if it isn’t in the best of locations. 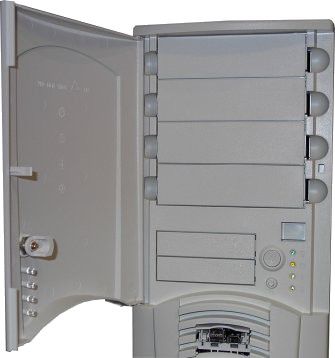 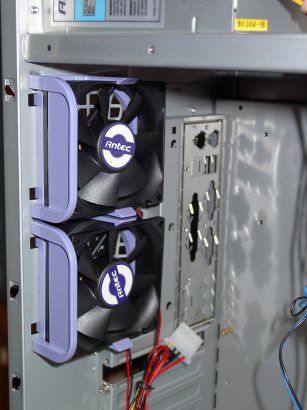 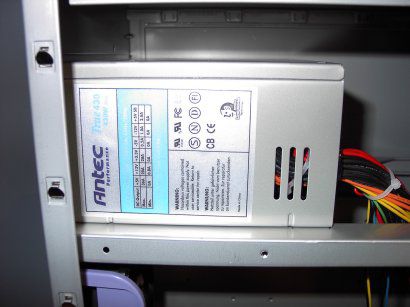 No real issues during the installation. This is an extremely roomy case, and you’ve got tons and tons of room to work. It would have been nice to see the inclusion of a removable motherboard tray, as that would have made it even easier than it already is, but we need something to look forward to in the next revision. 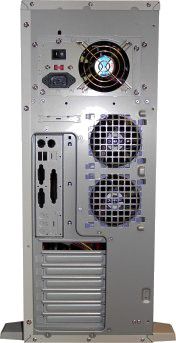 Rear of case (fans and ports)​

I also miss the thumbscrews that Lian-Li smothered over there 6085T. It takes a bit longer to unscrew, I’ll let it slide since the side panel is just so easy to remove, you don’t even need the thumbscrews.

The case itself is built like a tank, with 1mm thick steel. You could probably drop this from a building, and there would only be a dent on it (except for the plastic front panel, of course). This is, however, also a downside. The fact that it’s built like a tank means it weighs a ton. It’s backbreaking work lifting this thing up, and I wouldn’t really be too thrilled if I had to haul this baby to a LAN party. For portability, the Lian-Li is king. If you plan on keeping it at your house, this one is fine.

Next, I want to bring up the subject of the power supply. This has to be the best power supply I’ve ever had the pleasure to deal with. 430W of raw power and all the voltages are dead-on (except for 12v, which is only off by .5, and that’s nothing). It has wire loom around the standard ATX power plug, so you don’t see all those wires dangling around, a nice touch that goes a long way. The power supply has two fans on it (one in the back, and one on the bottom), so that contributes even more to the cooling of your case.

I was also impressed by the “fan only” connectors on the power supply. There is built-in circuitry which will automatically monitor the heat inside your case, and reduce the speed of your fans in order to keep the noise level down. It will up the speed when it’s getting too hot, as well. This is definitely a unique feature, but you wouldn’t want to accidentally connect anything else than a fan on there, as it might start feeding it lower voltages, and I don’t think you’d want you hard drive to be fed power that’s out of spec.

I decided to install two extra fans to the front of the case, which Antec supplied, and it was incredibly easy to install them. They snap in as easily as they come out. The cooling of this case was excellent, even running stock. Of course, it was improved with the side-panel fan plugged in as well as my hard drive fan and the front fan.

Antec also thought of a interesting concept along the way. The hard drive cages are removable, which makes hard drive installation a breeze (you just need to push a little lever to the left and pull out). Also, there are drive rails that come with this case. This makes it incredibly easy to snap out your 5.25” drives, but that feature is nothing new, Antec cases have had it for a while now.

Finally, it’s important to note that you can in fact lock the front panel of the case so that nobody can power down your machine, or steal any of your drives without first unlocking it with the key. The keys themselves are all the same for Antec cases, but nevertheless, it should serve to thwart the casual robbers at LAN parties. The side panel is also lockable, which is nice. Nothing prevents someone from prying open the front panel, though.

While on the subject, one complaint about the front panel in the first Performance cases was that it felt really cheap and flimsy. This has obviously been addressed in this revision, as it feels a little more resistant now.

Antec has managed to impress again with their PLUS1080 case. The case is spacious, but you don’t feel like there’s tons of room to spare, like in full tower server cases (even though this is what Antec calls their SOHO case). The edges are all rounded out, so you really can’t cut yourself while working in there.

It’s a case modder’s dream, as there are so many possibilities. In that respect, Antec really manages to grab onto that audience. I think modders will be very happy with this case, and many have already churned out great mods so far. Things like an additional two LEDs in the front make for some creative possibilities.

The included power supply is simply amazing. You can’t ask for anything more. The fan only power connectors are a unique feature, and they really do work quite well. There should be enough power for even a dual-processor rig and the most power-consuming of video cards (Radeon 9700) and peripherals.

I don’t really have any gripes about this case. Sure, I could say it’s not as nice as the Lian-Li, but that’s beside the point. It’s not aimed at the same market. The only thing it’s really lacking would be a removable motherboard tray and maybe a few thumbscrews thrown in for good measure.

One conclusion we can withdraw from this article, and by comparing it to the Lian-Li, is that both companies really aren’t in competition. They’re both addressing completely different markets, and they manage to both do a good job at it. There’s no better case in my opinion, you just have to evaluate what you want and need. Is it the great looks of the Lian-Li, or the robustness and flexibility of the Antec. The choice is yours, and they will both serve you well.