It's been quite a while since we've seen a truly good role-playing game. The closest we got to a decent single-player RPG in 2004 was with the likes of Vampire: The Masquerade - Bloodlines. It presented itself as a merely 'OK' RPG while it implemented great gameplay techniques but suffered from numerous bugs and a bad use of the first-person perspective. Fortunately, developer Obsidian has refreshed this RPG drought with their latest offering as the sequel to one of the best RPGs to be released in years. 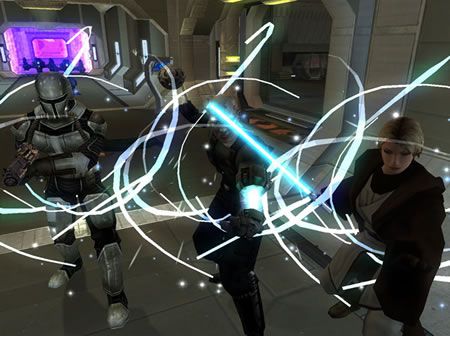 As the sequel to 2003's hit RPG, Star Wars Knights of the Old Republic , Star Wars Knights of the Old Republic II: The Sith Lords takes place five years after the events of the original game and thousands of years before any of the feature films. As the title implies, this sequel once again sees the Jedi battling against the Sith in an attempt to save all mankind. It would seem that the events of the original game have wiped out all but a handful of Jedi. The Sith and their dark lord have been traveling known space searching for the last of the Jedi. Most of the Jedi were killed in the Civil War between the Republic and the Mandalorians. Without the wise counsel of the Jedi Order, Revan rose up arms against the attackers of the Mandalorians, and you followed him to war. When you returned from battle, the Jedi Counsel exiled you from the Order and you took your own path.

Now, five years after the events of the Civil War, you find yourself on a very familiar ship (the Ebon Hawk) drifting through space after an attack. This is where you first begin to play the game, and are once again introduced to the game through a tutorial level allowing you to play as a droid given the task to slightly repair the ship while everyone else has been knocked unconscious. After the tutorial level you soon land on a mining post, which soon becomes abandoned due to some strange happenings. 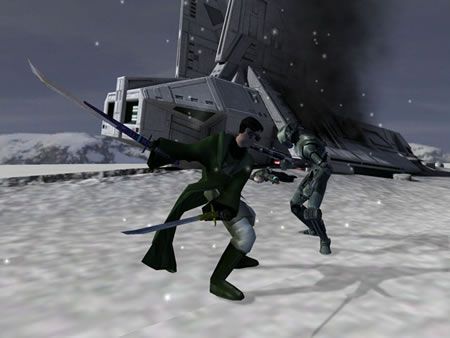 Just as in the original game, you find yourself waking in an unknown environment with your memory of the past years, and the war, lost. You soon meet up with Kreia who was a fallen dark Jedi and is now neutral between both the light and dark sides. She is the first companion you take along on your travels and proves to be a noteworthy person to always have in your group. After meeting up with her, it's now up to you to decide the fate of the universe as you choose your standing with either the light or the dark side throughout the course of the game.

Kreia is just one of many allies to join your group throughout the game. You'll soon come across many different races that soon join your party, all of which have their own special abilities and talents. You'll even see some reappearances from such characters as Carth Onasi and Bastila Shan. While these characters don't join your group at anytime, they do make short appearances and are quickly noticeable. Your party houses up to ten characters, but you can only have up to two following your main character whilst on a planet. Kreia is perhaps one of the most intriguing characters in the game. Since she is neutral to both sides of the force, you'll find here questioning your decisions and she may change your mind at times.

There are up to six different locations that you will visit during the course of the game. After visiting the first two planets, it's then up to you to decide how you wish to order visiting the last four. It is worth bearing in mind that you can go back to anyone of the planets to finish up some side quests, or any other missions, at any time. Some of these planets include Telos, Dantooine, and Korriban. The last two of which should be familiar to anyone who has played the original KOTOR. You can actually visit the old Jedi academy on Dantooine which is now in ruins from the war. Another familiar location is the Sith academy on Korriban which is also in ruins. Both of these locations are easily recognizable and are perfectly setup to mock their older counterparts in the first KOTOR. 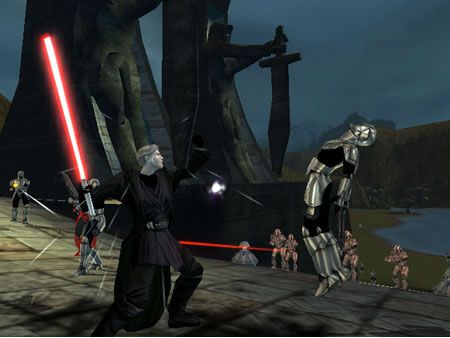 Also recognizable to anyone who has played the original game should be the user interface. For the most part, the user interface and controls are exactly the same as the original game. This allows fans of the series to easily jump right into the action without having to really learn any new features. However, that's not to say that this game doesn't include any new features. There are plenty of new items to keep things interesting. These new features are made up of mainly force powers and weapons. The force powers, of course, are selected by your will to either go towards the light or dark side of the force. The min-map is also a great addition allowing you to quickly see where you need to go and where you have already been. Weapon switching is also easier this time around. You can have up to two different weapon configurations at any given time. During battle, you can easily switch between these two configurations on the fly by pressing a small button that's directly on your main screen.

Some other new features include the behaviors that can be used during combat and can be easily chosen from a small menu in the bottom-left of your screen. These behaviors set up commands for party members that are not directly under your control. So, in other words, you can tell your other party members to either attack any enemy they see, or to be more cautious and stick beside the main character instead of running after all the enemies and becoming lost from the main group. Some of the behaviors include aggressive, defensive, stationary, ranged, Jedi support, and grenadier. This serves as a great feature that allows you to have control over your companions at any given time. 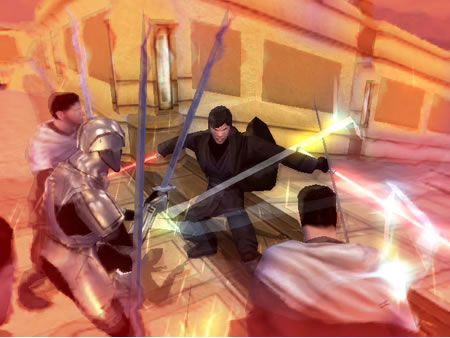 The character development in The Sith Lords seems to go a little deeper than its predecessor. As usual, you're capable of creating your own character from scratch. You get the choice of choosing from three Jedi classes of either male or female. These classes include Jedi Guardian, who's a master with weaponry; Jedi Consular, who's truly in touch with the force; and the Jedi Sentinel, who is a mix of both the Guardian and Consular. Depending on which one you choose, it will definitely change the type of force powers you gain later on and also your ability to fight in battles. From here, you can also change the way your character looks and their attributes. The amount of variations that you can choose for your character's appearance are very limited, but thankfully there are a large number of attributes and skills to upgrade. Some of these include strength, dexterity, intelligence, wisdom, charisma, computer use, demolitions, stealth, persuade, treat injury, and more. Depending on how many points you give to each one of these attributes and skills, you can change the way the game is played and which items you are allowed to use throughout the course of the game. Furthermore, if you just don't feel like going through all of that, you can just click on the 'Quick Character' button to allow the game to create a character for you.

As we said before, the character development in this new sequel does feel deeper, but not so much in the character creation as when you're actually playing the game. Like any traditional RPG, you're presented with dialogue trees when conversing with many of the individuals you encounter. Depending on which replies you choose, you can alter your standing with the light or dark side of the force. There is certainly a lot of dialogue to go through and you must choose wisely. Also, the dialogue starts to become very complex in giving you the ability to double-cross people that have given you jobs, and more consequences have been added to your actions which greatly increases the replayability of the game. Play through this title twice, and you still won't have seen every option given to you. The character development goes even further by giving your companions in your party inspiration points. Your party members are influenced by your decisions and follow you through either the light or dark paths that you choose. 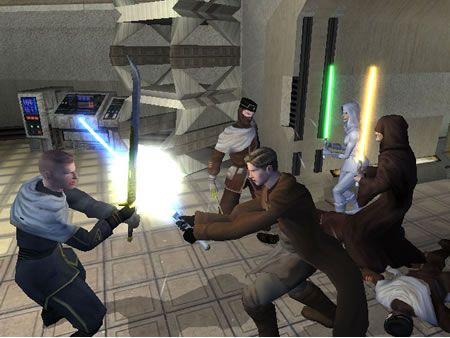 ​
Obviously, it's apparent that the gameplay mechanics of this sequel have stayed true to the original game. This is a great thing to see considering the fact that a completely new developer has been brought on board for this sequel. No longer in the hands of the famous RPG developer, BioWare, Obsidian Entertainment has developed this sequel as their first game ever and are currently working on Neverwinter Nights 2. Obsidian Entertainment is made up of some veteran RPG developers, and their experience shows. The Sith Lords represents everything that a great RPG should be, especially with its unique combat system and 40 hours of gameplay. More of a hybrid of real-time and turn-based combat, the combat system in The Sith Lords is just like the original game in giving you the ability to pause the game to queue up attacks and then watch as your character goes to work.

The graphics in The Sith Lords really aren't much of an improvement at all over the original game. There are a few slight improvements here or there, but it would have been much nicer to see some more upgrades instead of looking like a two-year-old game. Also, we just have to mention that the cutscenes look rather pathetic. The scenes in which you see the Ebon Hawk either flying too or from a planet aren't too bad, but the worst ones appear when there are characters speaking which just look horrible. Most of which include when the Dark Sith Lord makes his appearance on his ship. It may have looked good on the XBOX using a low-resolution television, but on our high-res PCs it isn't too pretty. Fortunately there aren't too many of these scenes.

Like any Star Wars game, The Sith Lords contains some great sound effects that include sounds and music taken directly from the movies. Also, it's great to see that every character is fully voiced. Most of the good voices come only from some of the main characters such as Kreia, but it's still better to just listen to all the people speak instead of sitting there reading pages and pages of dialogue. 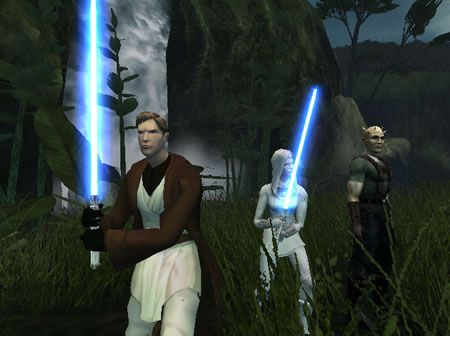 In the end, Star Wars Knights of the Old Republic II: The Sith Lords proves to be a worthy sequel especially when you consider the fact that it's only been a little over a year since the last one. It's definitely a great and entertaining RPG which is something we haven't seen in a while. However, it's not without its share of bugs. We have noticed a few annoying bugs throughout the game including party members getting stuck or running through objects when following you. Also, one of the most annoying bugs is when you select an option in a dialogue tree and then it ends up taking you back to the previous dialogue tree menu resulting in you having to go through it all over again. Hopefully some of these issues are soon to be fixed with a patch. Until then, hardcore RPG fans should find some great gameplay in this sequel.