It is impossible to go through a review of any kind of sequel without likening each individual section structure to the previous iteration. The first thing you are always made particularly well aware of is the step up in overall graphical quality. Sequels themselves usually follow that trend the entire length of the game, with a few graphical and gameplay tweaks being enough to drag the cash out of gamer's pockets. The first Call of Duty title stole the crown of 'best cinematic gaming experience' from EA's Medal of Honour series in quite brutal fashion. Set piece after set piece managed to create something that not only became addictive, but also transpired to be quite a special game indeed. 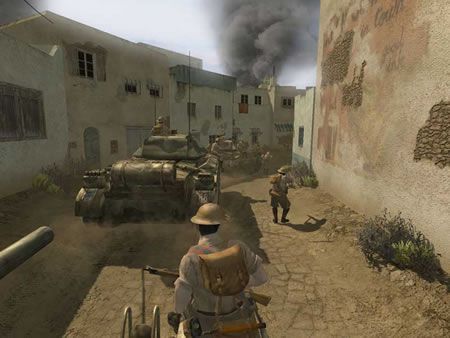 So a sequel arrives, and what exactly have Infinity Ward done to improve things? Well, as mentioned earlier, the graphics have had quite a major overhaul. With the settings at their highest everything looks breathtakingly beautiful. While everything you would expect to shine and move in a completely realistic manner does so, the smoke affects must receive special praise for their sheer dazzling beauty. Toss a smoke grenade into the fray and smoke slowly begins to billow outwards, until it consumes the entire area. You are regularly encouraged, by the shouts of your compatriots, to throw your short supply of smoke grenades out into battle to hide your squads progression. Not only do they look the part, but they also do play quite a heavy role in turning the tide of a battle when the odds are heavily stacked against you. When coming up against a machine gun nest, by turning a patch of empty ground into a smoke filled section means your squad can progress without the fear of being mercilessly cut down by enemy fire. You are not entirely invulnerable of course, and coming face to face with a German soldier while rushing through a smoke cloud can be quite a chilling moment indeed. 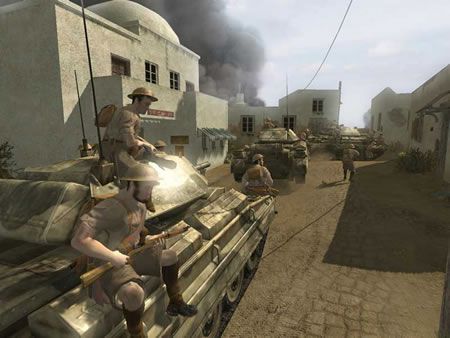 The improved aesthetics don’t end there though. The aural experience has increased ten fold, with some quite glorious sounds. If you have yourself a good set of speakers then you will be engulfed by the sounds of war happening all around you, which makes you feel merely a small part of a much larger full scale war. Your squad mates will bark out orders, and point out where the enemies approaching from next. They will even make idle chit-chat when things are calmer. Unfortunately, you are not able to instruct your squad mates where to go or what to do, which could have been a fantastic addition if set up correctly.

These impressive aesthetics aren’t merely just to show off the impressive abilities of the Infinity Ward team however. They really do draw you into the game quite considerably, giving you that un-nerving feeling of being in a war-time situation. The set pieces, which happen in great abundance (which in other games may begin to feel a little tired after the first few hours of play) only help to heighten the overall experience to an even greater level here. Tanks might roll overhead; you might catch a glimpse of a huge explosion just in the corner of your sight, which could quite easily go missed when you are concentrating on who is taking pot shots at you from a far off building.

This could very easily have fallen apart if the enemy AI during 'normal play' wasn't quite up to scratch. Many a gaming title has fallen from grace because of a poor enemy AI routine. In Call of Duty II, your enemies will not merely stand and wait to be cut down, instead they will take cover, attempt to flank you, and even try to suppress you while their comrades toss in a grenade. Equally as impressive are your fellow squad mates, who will have no qualms in storming buildings and bunkers with aplomb. The amount of 'dumb moments' where your team mates will refuse to react to oncoming hordes are thoroughly cut down to zero and each will take up the best position, and perform the best action suited to the task in hand. 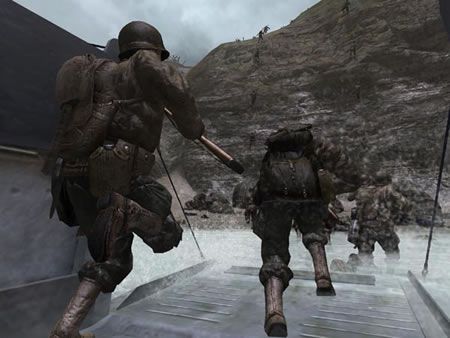 ​
These tasks however are very much by the numbers. Storm a bunker, take control of a machine gun nest, or defend a fortification long enough to be relieved are the main bulk of what will occur throughout the games 27 missions (spread across 3 campaigns), The action is broken up by short stints of on-rail sections, and a brief spell as a British tank commander, but these are short lived, and in all honesty, of a much poorer standard to the rest of the game. As enjoyable as commanding a tank out in the desert can be, it does not compare to clearing houses and bunkers.

Infinity Ward have once again brought us all a fantastic first person shooter experience, which covers the Allies' side of the Second World War with aplomb. Unfortunately the success of the first title seems to have only gone and initiated a game that is purely more of the same, rather than a new and improved gaming experience. But to criticise anyone for denying the opportunity for their legions of fans to get their grubby hands on what they crave would be an incredibly harsh thing to do. Despite my slight misgivings, Call of Duty II not only stands as the best example of how enjoyable a Second World War based shooter can truly be, but also comes close to reaching that obscenely high level that Half Life 2 has set. Call of Duty II is un-doubtedly an excellent shooter, and definitely well worth a purchase. Just don’t go expecting any kind of innovation.