There haven't been many new racing titles on the PC lately. In the past few months, the choices between such titles have simply involved either NASCAR or illegal street racing where you can fully customize your rides. However for gamers who are not fans of either type of racing, developer Bugbear has put together something completely different that deserves some attention. When we say "different" we really do mean 'different'. There aren't many racing games that allow you to launch the driver 100 meters into the air from the windshield of a car. That is just one of FlatOut's many perks, and it's done quite well. The only problem is that the joy obtained from watching such an action doesn't last long, and quickly becomes overdone.

FlatOut's main area of racing takes place in its career mode. When starting a new career you are given $4,000 to work with and a number of rundown derby cars to pick from. Much like any other racing game each car is different not only in looks, but their weight, acceleration and top speed: all of which play a role in their performance and pricing. Once you have chosen your car, you can then start the career mode. The career mode consists of three different tiers that must be completed. The three tiers are all identified by bronze, silver, and gold. Each tier contains exactly 12 tracks that must be completed in order to win the tier. After completing the tracks, more cars and tracks will then be unlocked in the quick race mode, and the next tier will be unlocked upon the completion of all 12 tracks. 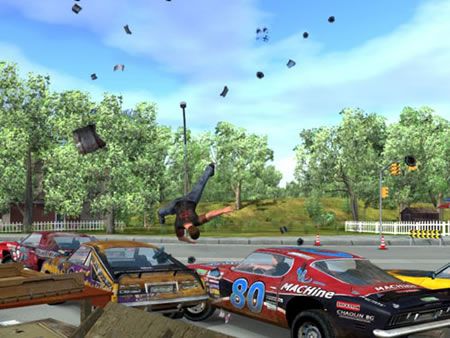 Each tier becomes increasingly more difficult as the AI's driving skills enhance up the scale. Not only that, but the tracks themselves also become more challenging with the introduction of more dirt and snow-covered tracks. Once you have advanced further in the career mode, you can then buy more upgraded cars that offer you much better performance but also cost a lot more money, so it is always wise to save a lot of the money that's earned from these races. Your money can also be used to tune your car with some expensive upgrades. Such upgrades include buying better performance parts for your engine, drivetrain, exhaust, suspension, tires, and even buying a more sturdy body. Unfortunately these parts only affect your car's performance and not the visual aspect. So buying a roll cage for your car will only make it withstand heavier blows, and you won't actually see the roll cage in the car. With so much money that can be earned from the races, it really doesn't take long to fully upgrade your car. 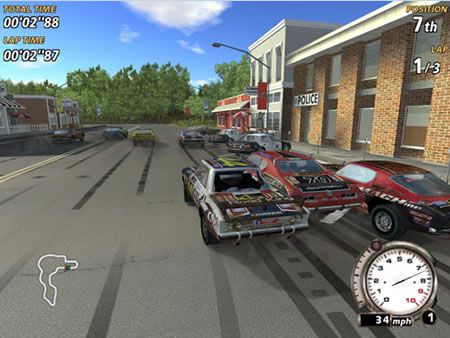 The races in FlatOut can be pretty intense, which is thanks to an awesome physics engine. Everything within the game world can be broken or smashed through. This includes just about anything you see on the edge of the tracks such as cones, tires, wooden fences, platforms and some other strange items that are just randomly situated on the track. Hitting any item will give you fill up your "FlatOut" metre depending on how hard you hit it. This meter is more-or-less the same as nitrous, and can be activated at any time by holding down the right button.

Even though the debris does look awesome it feels a little overdone. In fact the whole physics engine just becomes ridiculous at times. There are plenty of times where there are random objects laying right in the middle of the track just waiting for you to hit it (because it's just cool to see stuff go flying). Whether it's cool or not it still looks rather dumb, especially seeing as these tracks are meant to look like professional race tracks. So when you have a semi truck laying across one part of a track, you can't help but wonder that the developers just wanted to see how cool they can make their physics system work. The physics system also adds to the bouncy style of the cars. This makes it even harder to drive at high speeds when you car is bouncing all over the place when going over the smallest bumps.

Although the career mode does play a large role in FlatOut considering the fact that it's the only way to unlock the more prominent features, it's actually the most boring part of the game. The races can be fun for a while, but eventually you'll just want to get through them as fast as possible so you can unlock the bonus games. The bonus games the best feature of the game overall, and include some completely unique mini-games. There are a total of six bonus mini-games that have you launching the driver of your car right out of the windshield. Each game gives you three tries and then adds up all three scores. Depending on your final score, you're awarded some extra money. The two most basic games include a long jump where you launch your driver straight ahead as far as you can, and the high jump where you launch him up as high as you can. A few of the other games that let you launch the driver include bowling, darts, a clown with holes cutout of it that you can send your guy flying through, and a large bull's-eye. All of these mini-games are fun to play and are definitely hilarious as you watch your driver go flying into the air and hit the ground hard. 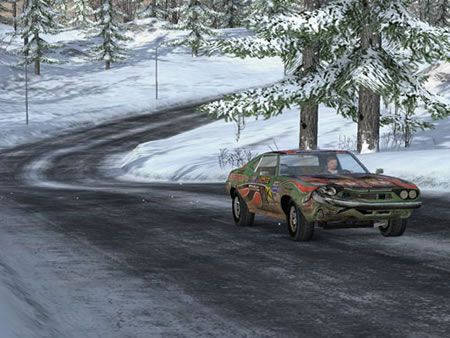 ​
Some of the other bonus races include three simple tracks such as a small circle and figure eight styles as well as three different demolition derby arenas. The three demolition derby arenas are concrete, dirt and sand. This area of the game is where the damage system really shows its stuff. The damage on the cars is some of the most realistic damage we've ever seen in a PC racing title before. Just about everything on the car can be broken off, and everything is damaged according to how and where it was hit. It's so detailed that you can even see the cooling fan in front of the engine.

FlatOut includes a multiplayer mode that lets eight players battle it out in any of the bonus tracks or regular tracks seen in the single-player mode. There's also a hotseat feature that lets you play against your friends offline by using the same computer. This just allows you to take turns with your friends to compete in any one of the bonus mini-games. The only real problem we noticed in the multiplayer mode was the fact that there weren't any other players to play against. We rarely found anyone to compete against online making this portion of the game rather obsolete.

The visuals in FlatOut are very impressive and certainly scream "Next-Generation". Everything looks very crisp and detailed, and the textures are very smooth. The frame rate is also smooth even at the highest resolutions and graphic settings. The sound effects are also good, and the choice of music fits the game quite well, despite the fact that the music does seem like it's from unknown rock bands. 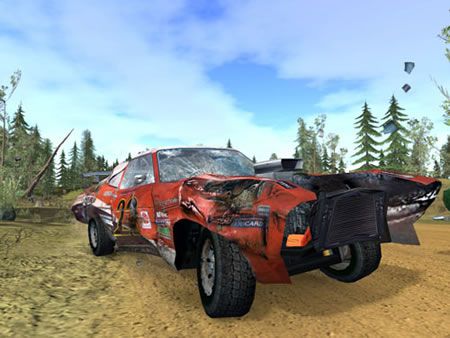 With it's $40 price tag, FlatOut might not be worth purchasing just yet. It's great graphics, incredible damage system and enjoyable mini-games just can't make up for its overuse of the physics system and bland career mode. It does set itself apart from other racing titles, but it just doesn't have enough to offer for the price. With that said, you might want to consider giving FlatOut a look later on down the road when it hits bargain bin prices.