These days the growing number of WWII shooters and tricked-out import car racing games is making it increasingly difficult to find something truly original and unique. Sure each of these type of games are fun to play and all offer up their own style of gameplay to their respected genre, but there comes a time when we just need a break from it all. What we need is something original to the PC platform and something that can deliver up a humorous atmosphere to break the ice. This is where Psychonauts makes its entrance. Not only is it an action/adventure platformer (which is quite rare on the PC), but its concept and game design is as unique as it gets, making it just what the doctor ordered. Coming out of the mind of Tim Schafer, who is responsible for previous titles Grim Fandango and Full Throttle, Psychonauts is simply a fun and enjoyable experience that no gamer should miss. 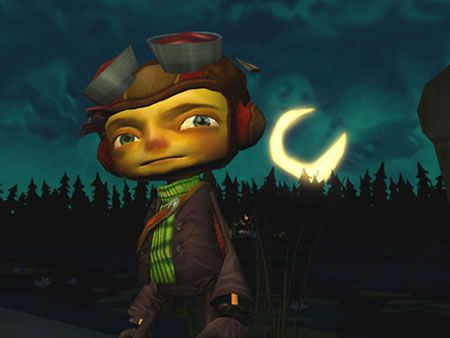 The story of Psychonauts takes place at the Whispering Rock Psychic Summer Camp, a training camp for young psychics. The students are trained on how to use their psychic powers to fight the forces of evil, and if they are talented enough, they can become the ultimate psychic agent: a Psychonaut. Psychonauts fight their battles in the mental arenas of people's brains as they can fix a person's insanity and kill off their inner demons. The camp is designed to train gifted children in this area by using a number of different classes and courses. You play as a newcomer, Razputin or Raz for short, who has actually run away from his circus life and has snuck into the camp with the high ambition of becoming a Psychonaut. It's not too long before they find out that someone is stealing the brains of the students, and Raz is the only one who can stop it.

The game starts out with you arriving at camp and taking a small stroll across the camp grounds. You can talk to any of the other students and get some insight on their backgrounds and personalities. Many of them usually have something funny to say and this is where the humor comes into play. There is always something humourous going on, and most of which can be found within the dialogue of the cutscenes. This really livens up the game and certainly discards the ability for the game to be serious in anyway. Once you have mingled with your peers a little, you can then walk around the environment and explore some more areas. Giving it a sense of free-roaming you can come back to any area of the camp at any given time to explore more areas and find new items that you may need later. 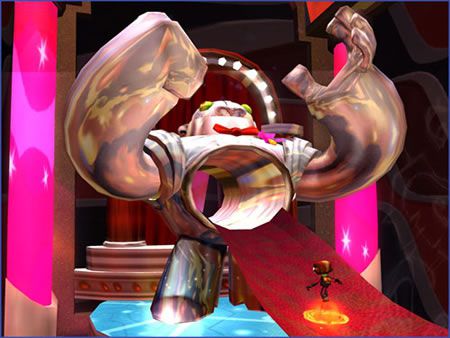 More areas of the camp can be opened right after you get through your instructors training course first. Coach Oleanders training course takes place inside his mind, and you need to get past training in order to advance. Once past training, the whole camp is then open for your exploration and the main story will continue on from there. The entire camp itself is rather large, and there are many different areas to explore. In a true platformer tradition, there are also many different items that can be collected which gain you new items later on.

The main item that you can find all around that you would want to collect are the arrowheads, which are the currency in the camp. When you collect a certain amount you can then buy new items at the camp lodge. Such items that can be bought include a dowsing rod (that helps locate hidden arrowheads deep in the ground), a cobweb duster for cleaning up mental cobwebs in people's minds, a dream fluff that restores your mental health and many more. PSI cards are also abundant within the game world. Collecting nine of these cards and combining them with a PSI core will allow you to advance one more rank. Once you reach certain ranks, you can then earn new upgrades and abilities for your psychic powers. Probably one of the most useful items in arsenal, however, is the psycho-portal. It is a miniature door that, when thrown at an individual's head, allows you to enter their mind. This is how you'll be entering and leaving people's minds, and there are a number of different ones in the game.

Throughout the game, you will enter the minds of many different individuals, all of whom have their own separate mental problems to deal with. Helping them out further advances the story, and you can enter and exit their mind at will. Each mind looks completely different and is modeled after that person's personality. This is where the game's quirkiness and awesome art direction really comes in. Going into these different mental worlds offers new challenges each time, and a different environment and look to deal with. For example, one of the characters in the game is a Mexican painter, so his mind resembles what looks like a small Mexican town covered in paint splotches everywhere. Even Raz's outfit changes to the surrounding appearance. Also the mind of a crazed milk man features floating roads, buildings, and telephone poles in a small urban-like environment. Most of these mental worlds can look plain freaky and interesting. They are also filled with plenty of awkward puzzles and paths to follow that will make your head spin. The gameplay itself can seem a little repetitive at times, but it makes up for it with the large variations within the environments and the challenges that are presented. 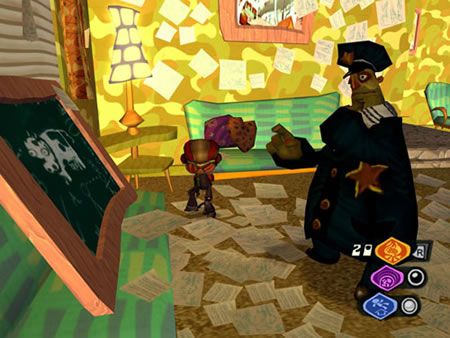 There are also special items that can be found within these mental worlds. One such item looks like a typical luggage bag that cries a lot. This is called emotional baggage. Finding the appropriate tag for each bag will get rid of these. You can even find a person's memories that are held in a small vault and view them in a slideshow fashion.

Psychonauts does also include the typical jumping and swinging that's found in most games of this genre. You'll find yourself jumping from one platform to another, swinging from pole to pole, sliding down rails and wires, and constantly climbing up and down ladders. So obviously Raz has some acrobatic skills which he no doubt learned from his circus lifestyle. Fortunately though all this jumping around never becomes too difficult and frustrating. In fact, the game's overall difficulty seems just right while it's not too hard nor is it too easy. 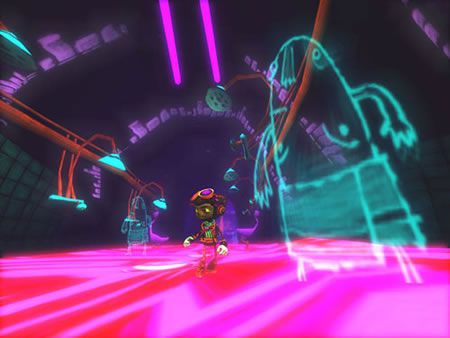 Raz really only has two different weapons. He can simply punch his enemies numerous times, or he can use his mind. The latter is certainly the more interesting approach. There are a number of different psychic abilities that Raz can use. Even more interesting is the fact that you have to figure out which ones to use when facing the game's diverse boss battles. Some of these special abilities include telekinesis, pyrokinesis, invisibility, confusion, shield, marksmanship, levitation and clairvoyance. Most of these powers do exactly what their names imply. We'll just explain the ones that are a little more confusing...

Clairvoyance isn't a power you'll use too often, but it does occasionally come in handy. It allows Raz to see the world from the view of whatever enemy he's targeting. This can sometimes help you to figure out specific puzzles. Marksmanship is Raz's ability to shoot a beam of psychic energy at his enemies. It's basically his long-range weapon. One of the more frequently used abilities is levitation. When using levitation Raz can create a virtual ball of psychic energy and stand on it to either jump to a higher area or roll around on it. He can even pull it above his head to float down to the ground much safer. It's neat to see in action and is one of the more innovative abilities. At any given time, Raz can have three of his abilities equipped for quick use. The others can be easily exchanged through the use of the game's inventory system which also houses all of his items and collectables. Although it would have been much nicer to have the ability to use all of his powers at the same time instead of switching them back and forth. 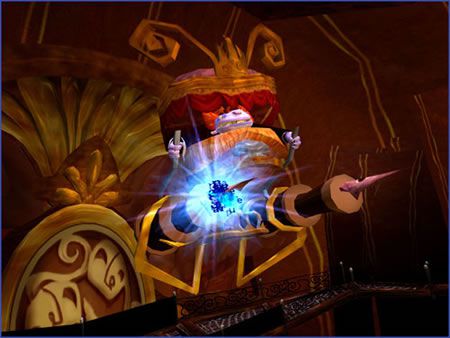 ​
Throughout these mental worlds you will come across a number of different enemies. There are some enemies specific to certain minds, but the most frequent that can be found in any of the environments include censors and personal demons. The censors roam the psyche of a person's mind stamping out thoughts that don't belong. Obviously Raz doesn't belong in other people's minds, so the censors are always on his case. So no matter where you go chances are you're going to run into some censors, but fortunately they can be stamped out with some quick psychic work or punches. The personal demons are very small creatures that randomly roam the areas. They'll blowup right in your face if they get too close. Another strange enemy is only found in water and is basically a large gooey claw which can only be seen by Raz. Raz's whole family has been cursed by a neighboring circus family that if they go in water they will die instantly.

As far as the technology side goes, Psychonauts displays a very unique and colorful art direction. Some textures and skins may seem a little bland, but the world is vivid and even the smoke is cell-shaded giving the overall game a nice cartoon look. Each character has their own look and is shaped completely differently. While the game does hint at them being humans they certainly don't look like a regular human. Raz himself looks like a small alien child. Either way, though, the awkward character designs really breath some life into this title. The voiceovers for the characters are also exceptionally done well. The only real problem we noticed here was that occasionally some textures would flicker when near the water in certain levels. While not being a huge issue, it's still a noticeable problem nonetheless. 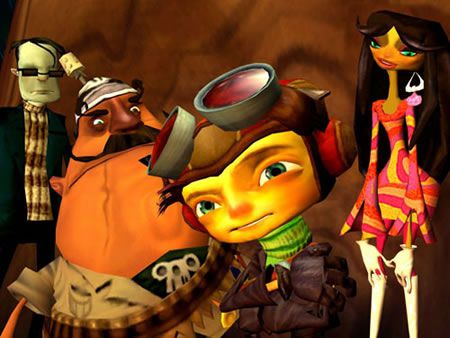 Psychonauts is a welcome breath of fresh air for PC gamers. From a certain standpoint it may look like a childish game, but it's quirky and sometimes creepy style, humorous attitude, and unique characters make it accessible and fun to all ages. It may not offer too much replayability, but going through one time is satisfying enough. Psychonauts is a refreshing blend of action and adventure that shouldn't be missed.