After years of countless delays and holdups, Juiced has finally arrived. Juiced began development right around the time of the first Need For Speed Underground title and has since been delayed a number of times due to publisher issues. Developer Juice Games originally signed a contract to publish their new racing title with Acclaim Entertainment. Unfortunately for Acclaim they went out of business last year, and Juiced was left alone without a publisher. THQ eventually scooped up the rights to publish the title so that development could be completed. Well, it's finally done, and we are disappointed to say that it was not worth the wait. Granted Juiced does have its finer points, and there are a few nice ideas put into this street racing game that you probably won't find in any other title. However, its poor presentation, weak graphics and undesirable driving physics don't exactly make it top dog in this genre. 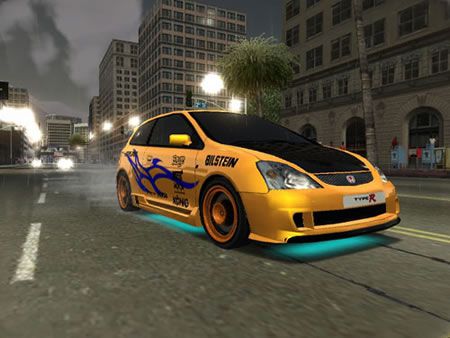 While Juiced doesn't necessarily offer up any type of story that we see so often in street racing titles, it does have a very lengthy career mode that takes quite a while to complete. Career mode is obviously the main area of gameplay in Juiced, where you can race for big bucks and unlock plenty of different performance and visual modifications for your vehicles. Right away you're given a hefty $40,000 and setup in a race against T.K, who serves as your primary contact throughout your career. Maybe he sees potential in your racing style, or maybe he's just after your pink slips. Either way he's your first contact in the game, and you can call him at anytime to setup a new race or to take on new challenges.

The characters that you'll meet throughout the game are shown in small cinematic videos where they talk rubbish about your ride and how much they can beat you. Each character does have their own distinct personality and desired amount of money that they wish to bet. Once you're done racing T.K. using one of his cars, you have to take a quick trip to the garage to spend your new $40,000 on your own ride. There are only a small amount of cars that are first available for purchase, but there is a large number of cars that are unlocked in the dealership later on. Normally when a new car is unlocked you'll receive a call on the cell phone letting you know what new vehicles have just been made available for purchase. Just a few of the listed cars include a Toyota Corolla, Mazda MX-5, Volkswagen Beetle GLS, Honda CR-X, Ford Focus, Mitsubishi Eclipse GSX and more. The car list does get much better later on, and most cars also have different models to choose. 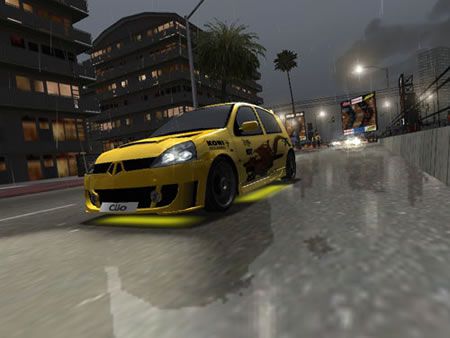 Whether or not your newly-bought car has some power behind it, it is still not a very good idea to take a stock car out onto the fierce street racing tracks. This is where Juiced 's customization capabilities come into play. This is really one of nicer features in Juiced . The customizations that you can do to your cars feels a little more in-depth than that of the Need For Speed Underground series. In other words, there seems to be more ways that you can customize your car. For example, Need For Speed Underground works from a simple upgrade system. When you simply want to install a better turbo system all you have to do is just upgrade to level 1 or level 2 if it's available at that time. It really didn't matter what manufacturing company you chose for that part that you're installing, because the company names were more for show, or authenticity, than anything else.

Now Juiced does use the same type of upgrade system, but it's much different depending on what company you choose for your upgrades. Choosing a specific company will give you more or less power, and this is shown to you right before you purchase the item. So, for example, buying a level 2 Brembo braking system doesn't have the type of braking power that the braking system made by AEM does. Of course each company's model is offered at different prices, so this really gives you more choices as to how you want to upgrade your car especially when money is tight. Another great thing here is that no matter what company you choose for a specific part, that company's logo will appear somewhere on your car to show off what you have in your ride.

Juiced contains many of the same customization features that other street racing games carry. You can change your induction system, ride height, suspension, gear ratio, exhaust system, tires, turbo system, brake system, and add some nitrous injection for those needed boosts of sudden speed. There are also a large amount of visual customizations such as different body kits including the front and rear bummers, side skirts, the hood and the spoiler. Other mods include changing the rims, tinting the widows, adding some company decals across the car and vinyls, putting some neon lights under your car, upgrading to a more powerful sound system, and even changing the sound of your horn or the color of your gauges. Further visual changes can be made by adding up to three different colors of paint onto your car by use of a base color, metallic, and pearlescent. 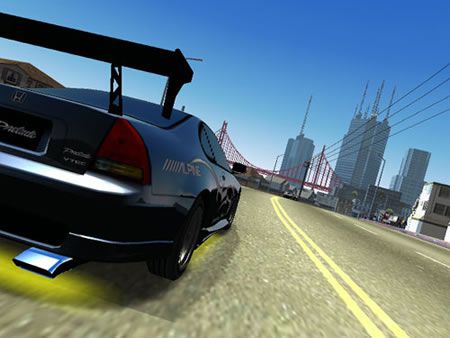 Once you're finally done customizing your car, you can take it over to the tuning shop or hit the dynamometer to see what kind of performance results it puts out. You can also take it out for a test drive to get a feel for your new ride before taking it out on a high-stakes street race. One last option allows you to sell your car or save your car's crew scheme. This basically means that you can save all the customizations made to your car so that they can be applied automatically to the next car that you acquire. Later on throughout the game you'll also be able to have up to four crew members including yourself, and each one of them has their own specific racing skill. 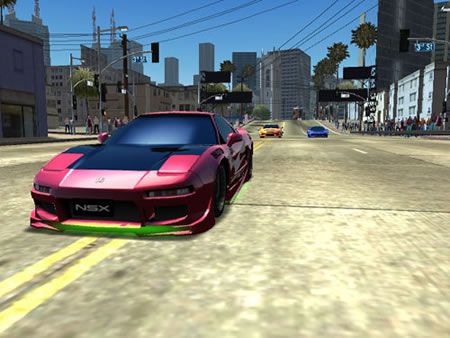 As soon as you're done hanging out in the garage you can finally head out onto the race track. Some races are actually closed-course professional tracks, but most of the races take place on the streets. However the street tracks have all of the side roads blocked off with road blocks, so there isn't any pedestrian traffic on the tracks like in other street racing games. This really doesn't help Juiced deliver a street racing feel. Also you always seem to start out in last place with your other opponents starting out side-by-side right in front of you. How fair is that?

Juiced 's whole racing system revolves around one simple statistic: respect. There are about eight or so different street racing gangs, and you have to gain the respect of all of them. You gain more respect by winning races, but you can also lose a lot of respect by damaging opponent's cars during races and simply losing races. Each gang has four different levels of respect that you can reach. The first level that you can reach allows you to simply attend the race but only to watch the race hosted by that specific gang. You can bet money on who will win, but you only get to watch the race take place. The next level allows you to actually participate in the race hosted by a gang, and at which point you can also bet money against the other racers. This really gives you more incentive to win since you can not only earn a lot of money for winning a race but also for betting against another racer. Even if you lose the race but beat the racer you bet against, you'll still win the bet and earn some money. The third level allows you to race for pink slips. So instead of betting money you can simply put up your car as the bet. The final respect level actually allows you to host a race on any date that you wish. In fact, races are chosen by the use of a calendar system. So there really isn't specific races that you absolutely have to do at any given time since you can just skip ahead to any date.

There are a few different racing events that you can participate in, but it really doesn't feel like there's enough here. The main one is the circuit race which consists of doing a few laps around a track. Other races involve point-to-point which is where you simply race from one spot to the other, and the sprint races which is traditional drag racing. One last type of event is the showoff, where you perform wild tricks for massive amounts of points and respect. You drive around a specific track while performing anything from donuts to full 360s. Your car's visual appearance also plays a role here as you'll receive more points when showing off your car's looks. 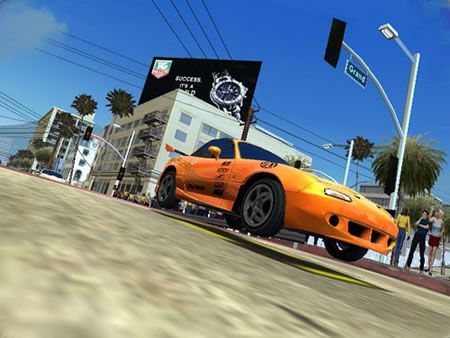 ​
Juiced also includes an arcade racing feature allowing you to jump right into a race and unlock more items in the game by completing all of the races. Multiplayer is supported here, but it tends to lag quite frequently making it virtually useless to play. One last racing feature is the ability to call up other racers who you've bet against in the past. You can either race against them for pink slips or cash, or you can take their challenges which normally consist of doing some laps in a certain amount of time.

It's the driving physics in Juiced that really bring the gameplay down. It's hard to describe the driving here. It feels like arcade racing such as what can be found in the Need For Speed Underground series, but it also has a somewhat simulation feel to it. Overall it feels rather clunky and can sometimes be a pain to make sharp turns around corners. Sprint races are also made even more difficult since there is really no helpful way to tell when to manually shift. 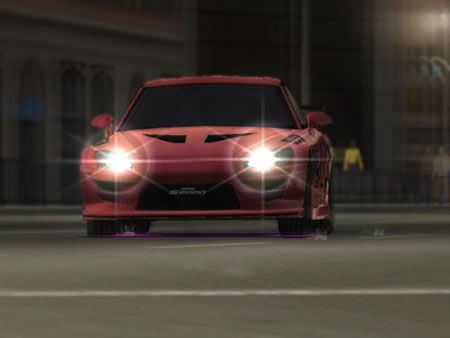 ​
As far as the graphics go Juiced is no spectacle. The car models look very generic, and the overall textures look too flat and low-resolution. All of that could be the result of this title being co-developed for the consoles at the same time. Also there appears to be quite a lot of aliasing even when turned up on the highest of resolutions with anti-aliasing cranked up.

Probably one of the absolute best parts about Juiced is the soundtrack. While the sound effects themselves don't exactly sound too realistic or detailed, the soundtrack delivers some nice racing music with a great mix of hip-hop, rock, and techno.

When all is said and done, Juiced just can't stand up to the competition. Perhaps if it arrived much earlier it would have received a larger applause for its unique respect system and many customization features. However not even these characteristics can save Juiced from its untimely demise and faults. It can offer up a few moments of enjoyment, but there are so many other racing titles out there that can do the same thing better and for a cheaper price. If you're desperate for a new street racing title than maybe Juiced is worth a very quick look. Otherwise we'll be sitting in the stands waiting for the next installment in the Need For Speed Underground series.