As the games industry slowly moves away from WWII, we're starting to see some great new Vietnam hits. Battlefield 1942 came out last year and was a great advancement in multiplayer gaming as it offered a wide range of vehicles and huge maps. Now its full sequel, Battlefield Vietnam, has been released, which upgrades the gameplay of this great multiplayer shooter. So grab your gear and crank up that '60s music, because you're in for a wild ride. 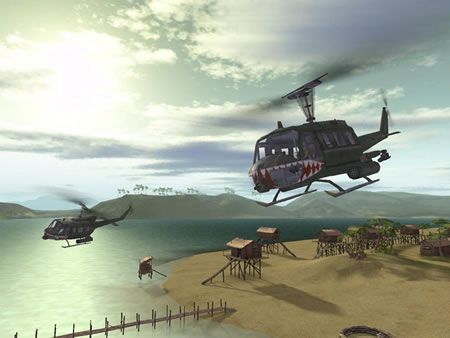 What's it like crawling through a deep jungle with Vietcong surrounding you and napalm strikes only a few yards away from you location? All we have to say is that it can get pretty intense out there. Needless to say, you will need the firepower to slice through the heart of the Vietnam jungle. Battlefield Vietnam includes many different weapons for just such an occasion. On the American's side, some of the weapons you can choose from are the CAR-15, M1 81mm Mortar, Mossberg Shotgun, M16 Assault Rifle, m60, M21 Sniper Rifle, M72 LAW Rocket Launcher, and the M16 Sniper Rifle to name but a few. The Vietcong are packing an AK-47, Double-barreled Flare Gun, M-91/30 Sniper Rifle, Mortar, RPG-2, RPG-7V, SVD Sniper Rifle, the Bouncing Betty mine (which when stepped on, shoots out of the ground up to thigh level and then explodes - my personal favorite) and many more.

Before heading out onto the battlefield you'll need to choose what kit you want to use. You can even choose between what clothes you wear and how you look. There are four kits to choose from including a normal soldier, engineer, heavy gunner, and scout. Each kit has two different weapon configurations to pick from. The standard configuration of weapons is generally a hand gun, your main weapon (machine gun, sniper rifle, etc.), grenades, and sometimes mines or other special equipment specific to your kit. That can include a wrench, blow torch, or a med pack, for example. 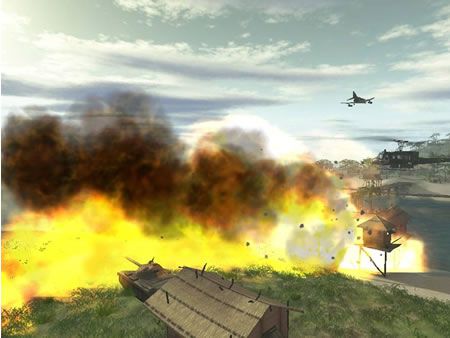 Is your current weapon just not delivering the carnage that you desire? Then all you have to do is just grab a different weapon from another soldier's dead, decaying carcass. Whenever a soldier is killed, their weapons are packaged right where they died. This allows you to change your weapon configurations in the middle of a battle and also enables you to grab some enemy weapons as well.

While crawling through the jungle and swamps may often be a fun and intense experience, you'll need some armor to protect yourself, or you'll die in no time at all. Vehicles have always been a huge part of the Battlefield series, and Battlefield Vietnam is no different. It offers a wide variety of tanks, jeeps, artillery, jets and troop transports. However, now the Vietnam battlefield introduces a new deadly vehicle to the mix. Whereas tanks were the dominating vehicles in Battlefield 1942 , helicopters now rule the skies of Vietnam and are the ultimate defense and attack mechanism.

The Americans have a total of four different helicopters at their disposal. They include the AH-1 Cobra helicopter, which is armed to the teeth with rockets and machine guns; the Huey, which is generally used for transporting troops; the Huey Gunship, which can transport a few troops and has two mounted machine guns and a few rockets; and finally the Chinook, which is a huge cargo helicopter capable of transporting many troops.

The Huey, Huey Gunship, and the Chinook can all be used to airlift smaller vehicles, such as boats, jeeps or light tanks into the battlefield. The Vietcong's helicopters include the Mi 8 Cargo, which is a large cargo helicopter used for transporting troops, and the Mi 8, which is more-or-less the same, but has multiple rocket and gun emplacements. Both of these helicopters can also airlift vehicles into battle. Many of the tanks and other vehicles can also now operate perfectly well through the rivers and deep water, so you're never safe from your enemies.

Another new advancement in vehicles are the jets. Both sides have one or two different jets that have normal machine guns and can carry bombs, but the Americans have the Phantom which carries napalm. There's nothing like the smell of napalm in the morning to get you up and running. Trust us, when you see the napalm, you'll definitely be running away. It's always awesome to watch the napalm strikes as they devour straight through an area easily killing anyone caught in its path. 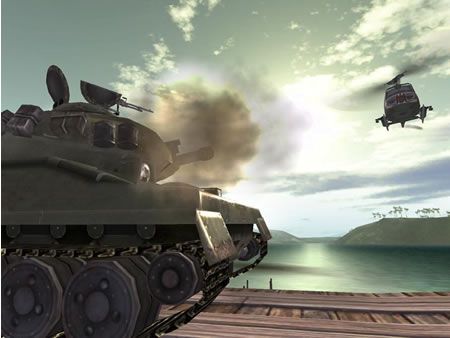 All the levels are modeled very well for the Vietnam era. After all, it doesn't feel quite like Vietnam without some trees. Battlefield Vietnam includes many trees scattered around through the maps. There's a lot of foliage here that you can hide behind including large bushes, grass, tons of trees, and even deep trenches. One thing that we didn't like too much was the fact that when lying face down in the grass, you could actually see through it. My guess is that this is either a bug, or was made on purpose so that the grass doesn't block your view. What ever the reason for it, it unfortunately makes the game somewhat less realistic.

Spread out through the maps are special spawning points. They are not spots that can be taken over either: they are just spawning points that are always there unless destroyed. The Vietcong special spawning points look like entrances to underground caves and the American's look like a big wooden crate. You can actually destroy both of these types to prevent any more people coming through. Just like in Battlefield 1942, the levels are very large and include various locations. You'll be hitting the ground of deep jungles, barren swamps, and destroyed Vietnamese towns. Many of the maps look like they were pulled right out of the movie Apocalypse Now. The 'Ho-Chi-Min Trail' map contains a very deep forest and is one of the best maps to model the Vietnam environment. 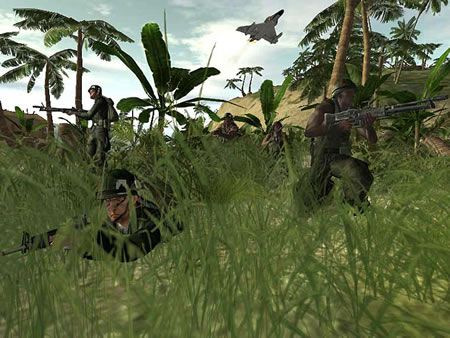 The single-player portion of Battlefield Vietnam is not much different from it's predecessors. You can choose from many of the maps listed and can then choose how many bots you wish to have playing. As usual, you can choose up to 64 bots on a map. With that many bots in one battle, things really starts to get insane. You'll usually find yourself dying quite fast with that many soldiers on the field. However, single-player isn't, and never was, the strong point of the Battlefield series.

The Battlefield games are always designed for their multiplayer combat. The multiplayer portion of the game involves the same maps, weapons, and vehicles as the single-player game. The gameplay is also basically the same except for the addition of Expanded Conquest Mode and Custom battle, which are the same as the normal Conquest mode but are slightly changed in ways that I will let you find out for yourself.

The AI has been slightly improved this time around. For example, the radio commands have now been simplified and the AI reacts better to them. So you can command them to defend a position, follow you, attack, etc. This allows you to be more in control of your soldiers. The commands only work when you have fellow soldiers a few yards away from you. Then they will hear you and follow your orders, but they don't listen for very long. They seem to get easily distracted and after only a few seconds of carrying out your orders, they will part ways with you. For the most part, though, the AI is an improvement over Battlefield 1942.

The graphics engine has been fully rewritten and looks better than ever. The character models are extremely detailed and smooth looking. The environmental textures also look much more detailed, as do your weapons. The weapons look so realistic that you'd think you're holding an actual gun. The amount of detail put into the weapon models and the reloading animations are extremely realistic. The explosions also seem to look much nicer and more clear. To experience these great graphics at their full extent, you'll need one heck of a gaming rig. The game noticeably starts to slow down with up to 64 people, or bots, playing with the graphic settings maxed out. 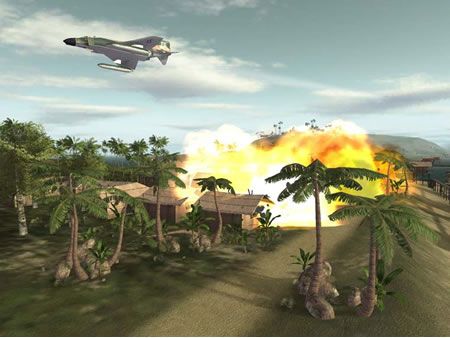 ​
The sound effects really involve you in the surroundings of Vietnam. While wondering through the forests you can hear the sounds of birds and crickets. The deadly noise of explosions can always be heard in the distance as the soldiers fight it out. The jets can always be heard flying by and are usually gone by the time you get a chance to look up into the sky. The sound effects seem to have been made more detailed, which allows you to hear every single bullet bouncing off a surface. And who could forget about that great '60s music? Every time you get into a vehicle all you have to do is just press '0' and a whole list of songs from the era pop up. While you're playing the music in your vehicle, other soldiers outside of your vehicle can also hear the music when you go by them. It's always a nice moment when you give your fellow comrades some motivation by flying overhead in a helicopter blasting "War." For those of you who don't care for the music of the '60s, you can simply drop in your own MP3s into the 'My Music' folder in the Battlefield Vietnam directory which will then disable the original songs of the game so you can play your own.

Overall, Battlefield Vietnam offers a great multiplayer experience that makes it worthy to be the sequel of Battlefield 1942. However, there really isn't too much value in the single-player portion of the game due to the relatively poor AI. Having said that, you should not buy this game for it's single-player portion only - but it's worth every penny for some great multiplayer enjoyment. With its delightfully upgraded graphics and detailed sound effects, Battlefield Vietnam has done it again for the world of online games.