Tech Spot have had the Gigabyte GeForce GTX 1080 G1 Gaming graphics card on their test bench this week - here's a snippet from their review:

The GeForce GTX 1080 hit retail shelves on May 27th, and, unsurprisingly, sold out in short order. Now, as I write this two weeks later, major online retailers such as Newegg list over half a dozen GTX 1080 models, most of which are still sold out.

Among the sold out graphics cards you will find the new Gigabyte GTX 1080 G1 Gaming. It's a triple fan cooled 1080 that also boasts a redesigned PCB. Even though it's currently out of stock pretty much everywhere, we expect availability to improve shortly. Products like the G1 Gaming will likely see strong demand for some time, as they are already cheaper than the Founders Edition cards, and likely to get even less expensive.
Click to expand... 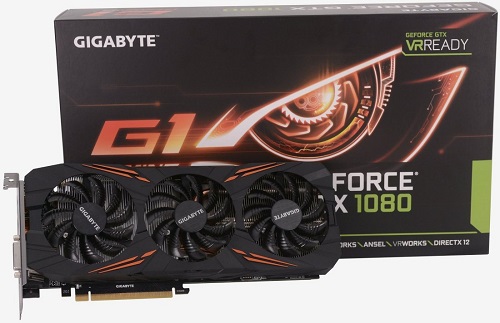 Well if your a gamer you might need it for a graphics hungry game.
Its a monster but then if you want those graphics it has to be.

, oh can you done one on budget drones please!!

I'm going to have to get a new card for BF1.

feckit said:
oh can you done one on budget drones please!!

I'll keep my eyes peeled for one

... just don't be tempted to buy the Reference Card (Founders Edition, as nVidia call it)

Reason ? I'm a noob when it comes to these things.
Ad

nVidia's, pull the wool over your eyes tactic, was to rename what was/is termed a 'reference card' (the basic configuration of the card that other manufacturers take and make good) and called it a ... Founders Edition ... then went and charged you more for the re-name.