EU orders Apple to pay €13bn in back taxes

The European Commission has published their verdict on the low tax arrangement between Ireland and Apple, and ordered that up to €13 billion should be paid in back taxes. Apple struck an agreement with Ireland back in the 1990s whereby they paid a low rate of tax in exchange for basing their European operations there. However, the European Commission has concluded that granting undue tax benefits to one specific company is illegal under EU state aid rules.

The role of EU state aid control is to ensure Member States do not give selected companies a better tax treatment than others, via tax rulings or otherwise. More specifically, profits must be allocated between companies in a corporate group, and between different parts of the same company, in a way that reflects economic reality. This means that the allocation should be in line with arrangements that take place under commercial conditions between independent businesses (so-called "arm's length principle").
Click to expand... 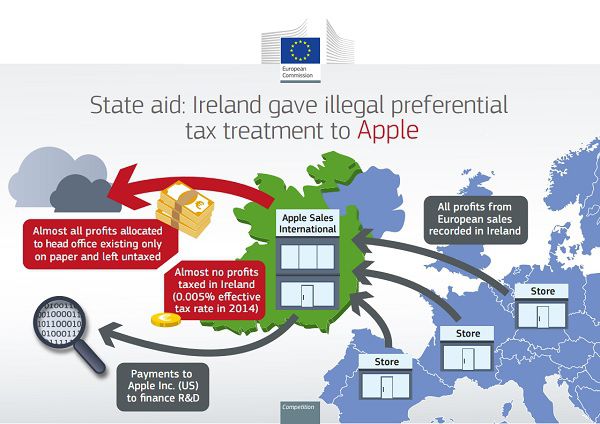 You can read more about the deal in question here: How Apple managed to get its tax deal in Ireland in 1991

Needless to say, Apple are none too happy with the decision, and CEO Tim Cook has published an open letter today:

The European Commission has launched an effort to rewrite Apple’s history in Europe, ignore Ireland’s tax laws and upend the international tax system in the process. The opinion issued on August 30th alleges that Ireland gave Apple a special deal on our taxes. This claim has no basis in fact or in law. We never asked for, nor did we receive, any special deals. We now find ourselves in the unusual position of being ordered to retroactively pay additional taxes to a government that says we don't owe them any more than we've already paid...

...Beyond the obvious targeting of Apple, the most profound and harmful effect of this ruling will be on investment and job creation in Europe.
Click to expand...


What do you think? Is it fair that Apple should pay so much in back taxes? Or is it about time that large companies step-up and meet their tax obligations?
Ad

Now will the EU please do the same with Starbukcs, Google, Uber and a few others I can't think of at the moment.

About time they started cracking down on this little loophole.

I can certainly see the Irish Government's point of view when they made this deal with Apple. Having a huge, world wide company based in Ireland provides many jobs and gives them a certain amount of prestige. It must have looked a good deal at the time.

BUT, everyone must pay their taxes, especially large, profitable companies, otherwise the man in the street, who has to pay his tax, starts to notice a very unpleasant smell in the air.

Get that tax paid, Apple.

The Irish government, however,wants the ruling reversed because it wants to preserve its status as a low-tax base for overseas companies.
Click to expand...

Mind you the Irish gov may have some sense as.

Fine Gael, the main opposition party Fianna Fáil, and a host of independent deputies serving as ministers in the coalition government support the low-tax regime for multinationals because it has created hundreds of thousands of jobs.

Apple chose the Irish city of Cork as its European base 30 years ago and had expanded from 60 workers to almost 6,000 in Ireland.
Click to expand...

Makes you wonder don't it.

Just in case you missed the size of Apple's cash mountain stashed outside the USA. It is ,

As for Ireland, it is obvious (for me. at least) that EU (France excluded) has turned a blind eye on this for a long time — the idea being that Ireland could catch up with the rest of (Western) Europe.

Of course the Irish government wants the ruling reversed. But nothing lasts forever.

The thing is, Apple need to have a base of operations in Europe somewhere, and Ireland has a very low rate of corporation tax so it makes sense to be there. Even if they're threatening to leave and take the jobs with them, then they'll need to be somewhere else and in all likelihood it will be another EU country, and the European Commission will not stand for another 'special arrangement'.

Becky said:
They move operations to the UK post Brexit!

That seems the obvious answer.

Chancellor Christian Kern, head of the Social Democrats and of the centrist coalition government, also criticized internet giants Google (GOOGL.O) and Facebook (FB.O), saying that if they paid more tax subsidies for print media could increase.

"Every Viennese cafe, every sausage stand pays more tax in Austria than a multinational corporation," Kern was quoted as saying in an interview with newspaper Der Standard, invoking two potent symbols of the Austrian capital's food culture.

"That goes for Starbucks, Amazon and other companies," he said, praising the European Commission's ruling this week that Apple (AAPL.O) should pay up to 13 billion euros ($14.5 billion) in taxes plus interest to Ireland because a special scheme to route profits through that country was illegal state aid.
Click to expand...

And... this is not blatantly off-topic in this thread:

On the decision to delete the prime minister’s post, Hansen told the Guardian: “At least they don’t discriminate, we have to give them credit for that.”

The CEO of Aftenposten’s publisher, Schibsted Media Group, said Facebook had tried to stop the newspaper publishing “one of the most important photos of our time”. Rolv Erik Ryssdal added: “It is not acceptable. Facebook’s censorship is an attack on the freedom of expression – and therefore on democracy.”

Ryssdal said Facebook was increasingly powerful in Norway’s media market, capturing NOK 1.5bn (£137m) of advertising while paying “only crumbs in taxes back to society”.

“Schibsted Media Group believes it is very important that the Norwegian media industry now gather to create an independent alternative to the American giants’ enormous power in the advertising market,” he said. “We are talking about the prerequisite for independent journalism. Facebook’s treatment of Aftenposten is another proof of the importance of this.”
Click to expand...