Thecus have been been around for several years, focusing on the production of NAS and other network/storage devices. The N2200XXX is one of their latest offerings – a two bay NAS aimed at SOHO/Home users with a need for high performance storage… hence the triple-x name, which stands for “eXtreme Power, eXtreme Function and eXtreme Value”. The NAS is based on the 1.8Ghz dual-core Intel Atom D525 and 1GB of DDR3 RAM, so it has the potential to be a speedy bit of kit. Both 3.5” and 2.5” drives fit in to the drive trays, allowing for hot-swappable RAID 1 and 0 configurations (or just JBOD if you want to maximise storage).

The N2200XXX currently retails for around £300, which is slightly cheaper than competing units from other rivals. In line with many other NAS devices, you are able to download from a whole range of modules to expand the feature set – the N2200XXX currently supports extras such as:
All of these are fairly standard modules, but it is good to see that Thecus actively maintain and update these on their website and forums. One stand-out feature of the N2200XXX is that there is a SD/SDHC/MMC slot on the front of the unit, which is a really easy way to copy files from a camera or other device to your storage. It’s not common to see these on a NAS unit, but it’s a handy feature for many home/small office users. Just below is slot is a USB port and copy button, which can be used to transfer data from a range of other devices (most often a USB drive/stick).

Other elements on the front of the NAS include the obligatory power button, an LED status bar (to indicate things like disk activity) and a touch panel which neatly hides the drive bays. It was very pleasing to see that the drive bays are so accessible and that the only screws needed are to hold the drive in the mounting trays.

Unfortunately, the glossy front panel and black side casing were real magnets for attracting fingerprints. Even after just a few minutes after setting the device up (with clean hands!), there were marks along the front of the case. These can easily be polished away, but it would be an improvement to see a different finish on future models.

The rear of the unit includes the 12V power socket, eSATA port, 2 x USB ports and dual Ethernet ports. The USB connections can be used for hooking up more permanent devices such as printers or additional USB drives and the Gigabit Ethernet ports can be linked and used for failover or load balancing. 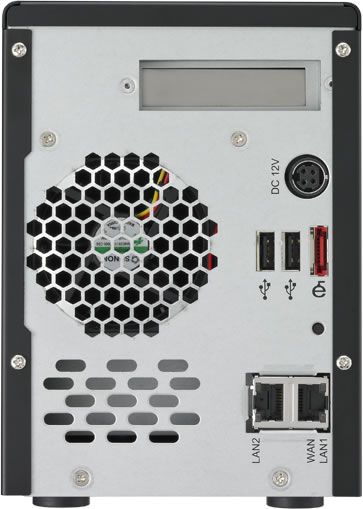 Inside the box, you get everything needed to get the NAS connected up to your router: 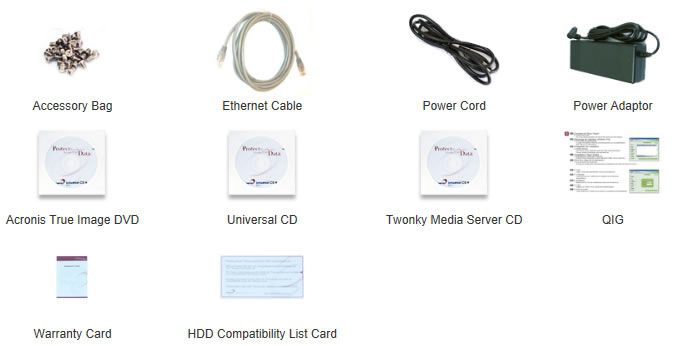 To get the NAS up and running, all you need to do is install your choice of hard drives (via the easy to use mounting trays/bay), connect the LAN cable to your router and then power the device up. The NAS is set to use a default IP address of 192.168.1.100, so you can browse to the admin page right away if you wish. If you’re not confident with network setups, there is also a small application which will auto-detect your N2200XXX and allow you to change the IP/password settings. Once you’ve run this application or connected to the web interface manually, the deeper web interface configuration can begin. 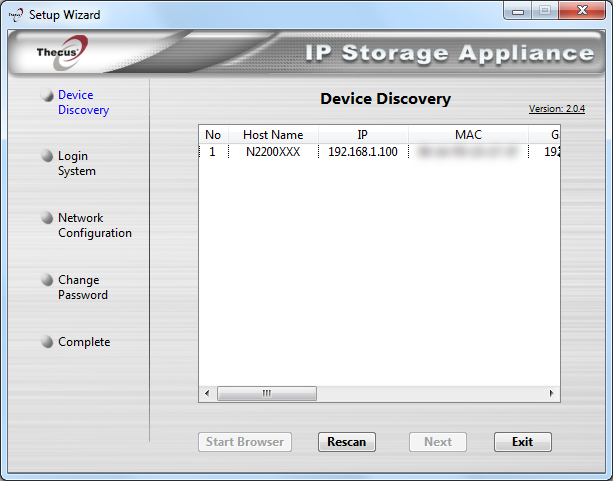 The N2200XXX shipped with the new v5 firmware already installed, although we further updated to a later release during testing (v5.01.04). The web interface is used for all NAS configuration and is set out in a logical manor, making it easy to perform tasks and set up shares. However, the GUI does lack the polish of other admin interfaces (for example, the font type is not consistent), which is a huge shame as it gives a false impression of what the unit is actually capable of. 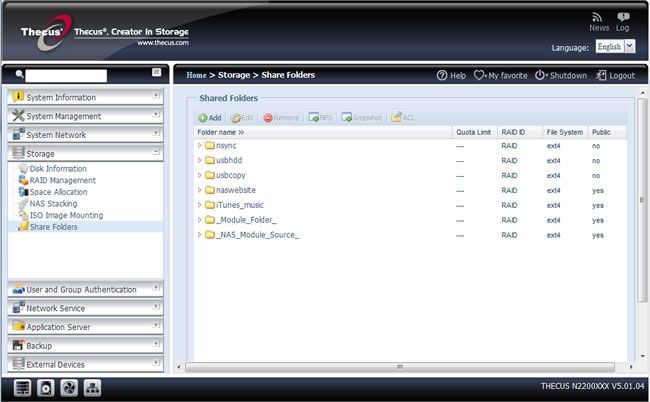 Thankfully, the admin interface works better than it appears and there are a good range of configuration options and features to play with. Some interesting features that would be handy to home users are native ISO mounting, an iTunes server and rsync capability. The essentials such as share management, iSCSI and Windows AD server are all easy to setup and worked well during testing.

After 2 weeks of use, we all of the main features to the test – including streaming media to a PS3 media server, network printing and trying several backup features. There were no bugs noticed and file sharing worked as you would expect, there were no errors or slowdowns during the file serving testing.

The Piczza photo server module worked particularly well and has the potential to be a handy way of sharing photos if you open up your NAS to the internet. It’s very easy to set up domain redirection to your NAS if you wish, making it possible to share select photos with friends and family (or even host your own website using the built in server).

The key claim from Thecus is that the N2200XXX is a high-performance NAS, which should give some great transfer speeds. After using the unit for 2 weeks, we’ve made plenty of large transfers and can attest to the fact that this is no slouch. The test computer (Q6600, 4GB Ram, Windows 7 x64, Atheros gigabit network adapter) is connected to the NAS via a Linksys gigabit router, with anti-virus software temporarily disabled to prevent any network slowdowns. Two identical 2GB Western Digital WD2002FAEX hard drives were used in non-RAID (JBOD) mode during testing.

The first test performed was the copy performance of a 3GB file, providing a good estimate for expected read and write speeds for large file transfers. We performed this test several times across the network and measured performance both ways and recorded speeds of around 91.9MB/s for read performance and 94.2 MB/s for write performance:

It is worth noting that these speeds are higher than the transfer rates of older SATA hard drives – so if you’ll need some good drives to make the most of this NAS. Compared to other units we’ve tested over the years, this is one of the fastest in terms of raw transfer rates. For day to day tasks such as opening documents and photos on network shares, then you won’t notice much difference – however when we performed our usual routine of daily backups, there was a nice little performance improvement compared to our current solution.

There’s no doubt that the N2200XXX is a very fast NAS and that the price is very reasonable compared to other manufacturers. If you’re concerned about having the fastest transfer rates possible (not far from maximum drive speeds) then there aren’t going to be many competitors in this price range. However, the external casing and admin GUI are lacking when compared to other NAS units. If you’re willing to sacrifice these for higher performance, then this is one of the better options for £300. There is no reason why the GUI can’t be improved in further updates as it’s a simple firmware update – hopefully this will be resolved in future versions.

We’ve been using this NAS for the past few weeks for all our usual storage tasks and it has been stable, fast and simple to configure. The memory card slot is a handy little feature and all of the software expansion modules worked well. The fan noise was perhaps a little louder than our previous unit, but nothing out of the ordinary. There is a beta firmware which should be released soon which intelligently adjusts the fan speed, which is a welcome improvement.