If you run any form of server in your household or small business, it’s good practice to have some form of uninterruptable power supply (UPS) connected so that you can perform a graceful shutdown if the power supply fails. Without this, there’s a possibility of data loss and corruption. On a home desktop PC, it’s unlikely that many people would feel the need for UPS – after all, even with a one-off sudden power outage, there’s only a small chance of a problem occurring. 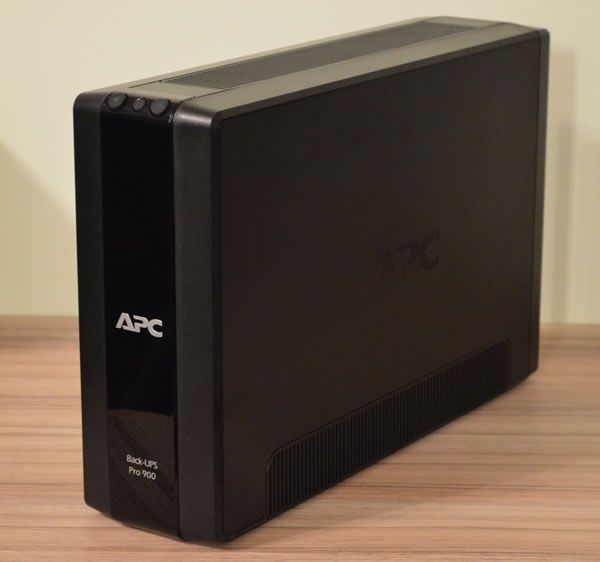 After two lightning strikes knocked out power at our house, followed by several power breaker failures, we thought it was worthwhile investing in a UPS. We use RAID to protect against drive failures and the cost of protecting against another power failure seemed like a good investment. The idea behind a UPS is that you seamlessly switch power to internal batteries when mains power fails, but also signal that power has been lost and how much battery time remains. For example, you may tell a server to power down gracefully when there is 10 minutes of UPS battery time remaining. You also gain some protection from surges and spikes, which may protect against damage during lightning strikes.

We recently upgraded to the APC Back-UPS Pro 900, which is aimed at the home user and small business market. You can power devices rated up to 540W with this unit, which should cover many non-gaming PCs and nearly all home/SMB servers and routers. In our instance, we power both a NAS and a Dell T20 Server.

Specifications:
With a maximum output capacity of 540W, you’ll need to make sure that your attached systems are below this limit at max power consumption. Our NAS and Server normally use around 120W, but could peak at 300W under full load. We opted for the 540W model so that there was additional room to grow if we added additional spinning disks. If you want to use this with a desktop PC, you may need to get a slightly more powerful model if you’re using a high-end graphics card.

The unit can power up to 8 devices (with surge protection) and 4 of these can be powered via the battery backup if the supply fails. If you used a desktop PC for example, you could power speakers and other non-essential things via the surge-only ports. There are also pass-through ports which provide surge protection for an Ethernet cable and RJ11 phone socket. If you had a power surge from something like a lightning strike, you’d want your network/phone socket to be protected too. All of the power outputs are IEC C14 Female sockets – so you can’t just plug a standard power plug directly in, you need to use an IEC “kettle” lead (2 are supplied).

Another point to note is that this UPS provides a “stepped sine wave” output, not a true sine wave, but very close. Some PSUs may not be compatible with this type of output, although I haven’t come across one yet (although I have read about other users who are not so lucky with an active PFC PSU). I tested this UPS on two desktop PCs, three servers and two NAS units – all of them powered up fine and ran on mains and battery output.

Transfer time is stated as 8ms typical (with a max of 10ms), which should be quick enough that a quality PSU will not blink. This is fine for nearly all consumer appliances, but very sensitive equipment may not appreciate this type of switchover (however, this is beyond the scope of a consumer grade UPS).

This UPS also includes an interesting power saving feature, whereby the secondary set of four sockets can be powered down when the marked master outlet has been powered down or put into standby. For example, if you power your PC via the UPS, you can have secondary peripherals powered off when your computer is shutdown or in sleep mode. Printers, speakers, monitors and so on would be good examples where you can save a small amount of energy when turning them off automatically. You can even configure the power usage trigger level at the master socket, from which the secondary sockets are disabled.

This UPS measures 250x100x382mm, so it is relatively compact – although heavy at almost 11kg (mainly due to the lead-acid battery). It blends in well with other black hardware that likely sits in most offices, so it’s not going to stand out. The LCD is a very welcome addition and displays useful information such as voltage, freq., power usage and estimated battery time. We often let ours display the current power usage, as it’s the most interesting statistic to view (and shows us how much load the server is under).

The three buttons on the front of the unit are for (1) Alarm Mute, (2) Power On/Off and (3) Display Mode (left to right below): 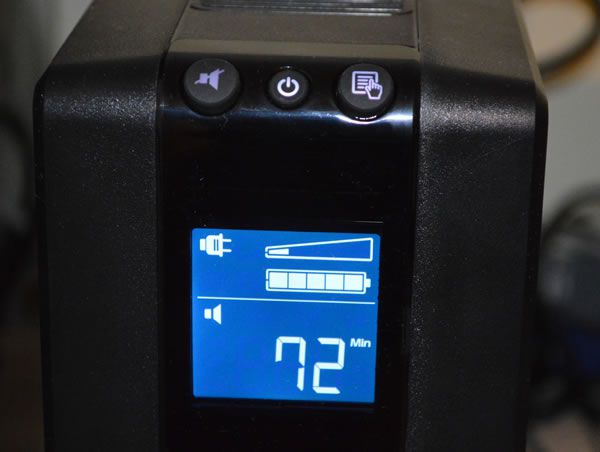 On the rear of the unit, you can see the 8x IEC, Ethernet In/Out, Phone In/Out and Data sockets – plus a single IEC input which you would connect to mains power: 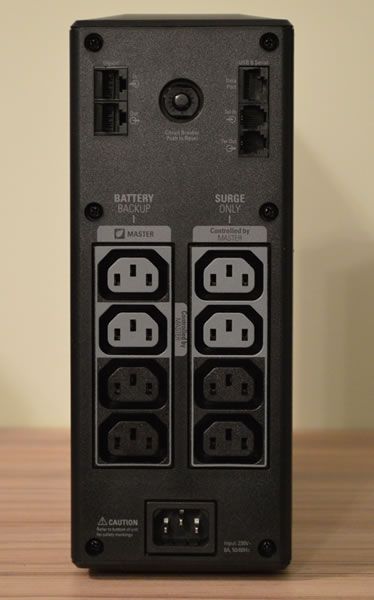 We’ve been using this unit for several months now, during which time it has been powering servers non-stop. We’ve pulled the plug on the UPS many times to see how it copes with reverting to battery power and the servers have carried on throughout (and correctly detected the time remaining signal from the UPS for a graceful shutdown). Interestingly, we’ve also had two occasions where over/under-voltage has been detected and the UPS switched over to battery power. We suffered no ill-effects anywhere else in the house, but the UPS was set to medium sensitivity and counteracted the problem. These events may not have caused a problem to most electrical equipment, but it’s good to know that they were protected against anyway.

We’ve tested a QNAP NAS, Synology NAS, Dell T20 running Windows 10/Powerchute and all of them have reliably shutdown (with an optional wait) when we have pulled the power. Most off-the-shelf NAS solutions will be compatible with APC UPS power signalling, plus there are several 3rd party apps for Windows and Linux to interface the UPS.

In our day-to-day usage, we didn’t use the power saving feature of the UPS, as we primarily use it for powering servers that are operational 24/7. However, we used this device with a desktop PC for a significant portion of testing and can confirm that the secondary sockets can be powered off when a master socket is detected as “off”. We plugged our speakers and monitors in to the secondary ports and had these power off when our PC was shut down. The power saving in this example would be very minimal, but there are no doubt some cases where the energy saving would be more significant.

There is a very slight humming noise during use, but this is not something you would necessarily notice – particularly as the UPS is likely powering hardware with onboard fans and HDDs, which are far louder.

For a home or small business environment, this UPS offers a good level or protection without spending a fortune on high end equipment. There are certainly UPS units that will provide a cleaner, true sine wave output – but most consumer grade equipment doesn’t require this. We’ve run many types of server using this UPS and all of them have worked flawlessly. For a relatively modest investment, the APC Back-UPS Pro 900 offers a good solution for protecting your computing devices.

At the time of purchase the UPS cost £142, which is slightly more expensive than some competitor UPS units of the same specs, however APC deal primarily in “power” and have the ancillary tools which make it worth the slight premium (software, support, availability of spare batteries).

Perhaps most importantly, the support we received from APC when another (much older) UPS failed, was exemplary. We had a smaller capacity model from the same series, which developed a minor fault after several years – after contacting APC and running through some basic tests, they had us up and running again with a replacement unit in just a few days. The support staff were very efficient in handling requests and were extremely helpful – this was a large reason for us deciding to stay using APC hardware.