Last Modified By in a cell by user

I posted this in an archived forum on accident. Posting it here as I don,t really see another thread talking about it or anything with a solution. Originally posted this on https://www.pcreview.co.uk/threads/last-modified-by-in-a-cell.987394/.

I would like to grab the user name of whoever modified a certain cell. The workbook spreadsheet would be shareable via SharePoint. Would really rather not use Track Changes.

Then would then repeat on down column C.

User Susan B. then goes and grabs the workbook and types in some text/ numbers in A6 with C6 auto populating with her username. Cell C5 still shows John S modified A5.

And so on, and so on. Below is an example of what I am talking about. Right now, column B would need to be manually typed in. 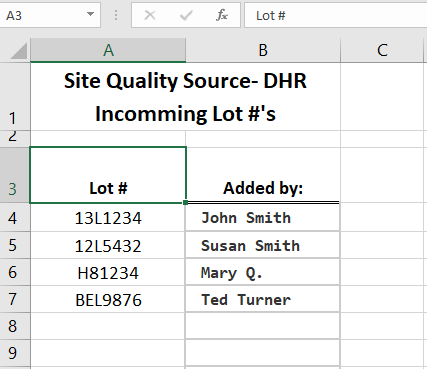 There was a VB code I tried that provided a "=getLastModifiedUser()", however that was not working as it would keep returning the user actively typing in on all the cells within column B that has the formula.

I assume the users have to Login. If they are required to log into the application, this may be a good place to start & then grab the name.
https://turbofuture.com/computers/Excel-VBA-Create-A-Basic-Login-Function I also some links about grabbing the login name. Good luck * I hope this helps.
C

Hi Francis,
Thank you for the reply. Requiring the user to log in to the worksheet probability would work but would create an additional step when the user is already logged in to their 365 account via logged into work network. Would much rather the user not have to "re log" in. I was hoping there would be some VB code that could create formula to grab the network user logged in who made a change to a cell.
Ad

Here is some links I found VBA – Recognize User, Get Username, Returning the Network user Name with VBA. I Googled "vba to grab user network login ". I hope this helps.