Yamada have released several DivX/DVD/MP3 players in the past year or so, and have become quite a popular name with Audio/Visual enthusiasts for bringing down the price of otherwise expensive units.

The Yamada Beatbox M512 MP3 player is based upon a design from the Korean makers of the MBird XT-21. After receiving a Press Release of the unit, the unit size didn't appear as small as it actually is - which is a tiny 38.6 x 86.7 x 18.7 mm. 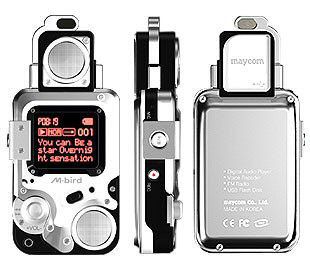 The Yamada Beatbox is not along the same lines as the iPod MP3 players (and clones), as the capacity is a much smaller 512 Megs - which can store around 8 hours of music. Firstly, this unit is about 60% the size of a standard iPod and 75% than the iPod mini. Secondly, this unit features an inverted LCD colour backlight which can display many different colours of text during playback. The final distinguishing feature is the build-in speaker pair, which is a new feature for a mobile player.

Specifications
The MP3 player supports the common MP3 and WMA audio formats, along with the ability to read text files (although this is rather impractical).

The top speaker on the unit can be unclipped to reveal the USB connection, which can be plugged straight into the USB port on a PC or connected to the extension cable which is included. The MP3 player doubles up as a portable storage device, which is now quite common amongst similar products. 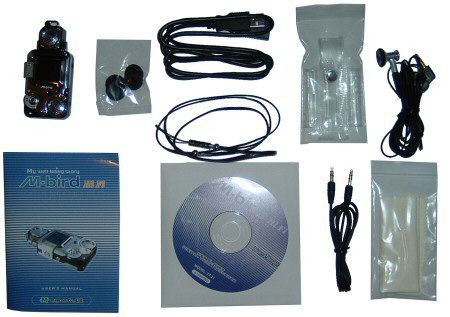 The Yamada Beatbox is recognised as a standard "Mass Storage Device" by Windows, exactly the same as USB pen-drives (which are becoming standard now). This means you can drag-and-drop MP3/WMA files straight onto the device in Windows Explorer. Charging the unit is also done via the USB port, although an AC adapter is available if you do not wish to charge the unit this way. The USB port is concealed underneath a speaker on the top of the unit, which can be "unclipped" to allow connection to a PC. 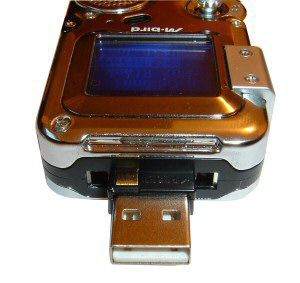 USB Port (without removable speaker)​
An FM radio is built into this small unit, but it is close to useless in many situations. The signal strength varies far too much, and it is impossible to get a clear station unless the unit is held still in the correct orientation (not much use on the move). Once the radio is actually tuned in and in the correct position the sound quality is great, but unfortunately this is hard to achieve.

Uniquely, the Beatbox has two speakers build into the unit. Although the speakers are only around 12mm in diameter, they are surprising quality. Of course, with such small speakers the bass and sound fidelity will clearly lack - but it is on a par with a small FM radio. Sound quality distorts a little at high volumes, but is optimal at around 2/3 max volume - ideal sound levels to listen to without headphones at a desk. 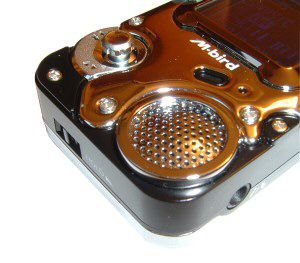 Joystick and Speaker​
Menu navigation is performed with 2 buttons and a mini-joystick, and is fairly well structured and easy to navigate. It can be a little confusing for the first few minutes, but its easy to get the hang of once the multiple functions once the buttons are remembered.

The LCD backlight is capable of 125 colours, with almost any combination available. This serves no real purpose apart from aesthetics, but it is a welcome addition to a stylish unit. The colour can be set to blink through all the main colours, or individual colours can be set for each mode (playback, recording, radio etc...). It would have been nice to see smooth fading transitions through the colours, instead of quick changes. 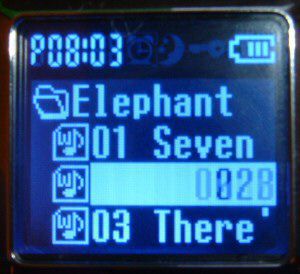 Playlist Menu Navigation​
Recoding functions are built into the MP3 player, with the ability to record straight through the built in microphone, an external microphone, line-in from a CD player or from the build in radio. Normal speech recoding is performed at 32kbps, quite satisfactory for speech and will store around 32 hours if you so wished.

After using the beatbox over a 10 day period for a few hours a day, the unit was only charged whilst the songs were updated whilst being copied over from the PC. The transfer speed was directly comparable to using a memory stick, so it can take some time if using an older USB 1.1 slot.

The overall sound quality is better than average MP3 players, and does include some equaliser settings if so desired. After playing a wide variety of MP3 and WMA files, there were no compatibility, corruption or skipping issues with any of the tracks. Of course, the sound quality is heavily dependant on the headphones used with the unit. The included headphones are acceptable, and better than most bundled headphones. Although, if you are listening to MP3s for a few hours each day it would be worthwhile investing in some higher quality headphones for much better clarity and bass reproduction. Surprisingly, the sound quality from the speakers was quite satisfactory, as previously mentioned.

The radio reception is very poor on this unit, and it can be very hard to tune in to a radio station unless the player is held absolutely still. Although this feature is a "bonus" for an MP3 player, it is very disappointing to see that is not implemented properly. 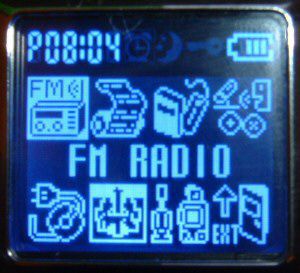 FM Radio Menu​
The weight and size are very pleasing, as the unit feels suitably solid - no creaks or uneven weight. Build quality also appears very high and the unit is finished extremely well. The unit has a "cyborg" look to it, very futuristic. This will not be to everyone’s tastes, but for those who feel the iPod is not to their liking.

The Yamada Beatbox is in impressive MP3 player, and unlike many that exist so far. The built in speakers are a unique feature, which aren't as pointless as would first be assumed. Many of the features are purely aesthetic, such as the RGB backlight, but the whole unit is designed to be an MP3 player and "gadget" in one.

If you want to impress friends with a new gadget, this will certainly do the trick! It is very techno-style, quite the opposite from an iPod. You'll either love this unit, or hate it - but heads will turn.

Despite initial reservations about the actual use as a functional MP3 player, the sound quality is very good and includes useful recording functions. The player weighs in with an RRP of £169.99, which is rather expensive considering 4GB+ devices are available for around the same price. This MP3 player is half gadget, half function - for which a premium is paid.