VIA have long been making chipsets for a wide range of CPUs, more recently focusing on the AMD range of processors. With the debut of the P4X266 chipset (the revision before the one used in this motherboard), there were a few legal problems with Intel, claiming that VIA did not have the correct licenses required to produce a chipset for Intel's own P4 range of CPUs. With very few motherboard manufacturers basing a motherboard on this quite reliable chipset, VIA was forced to take matters in to its own hands and produce motherboards based on its own chipsets themselves (much like Intel already do). This motherboard is based on the newer revision of that very same chipset, now the P4X266A. 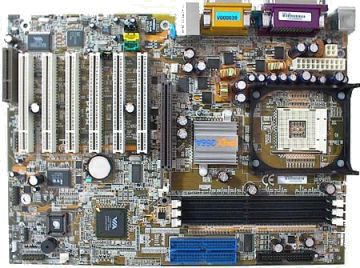 This motherboard supports the latest P4 processors (478 Pin 400/533Mhz FSB) with integrated AC97 audio, LAN adapted, USB 2.0 and ATA-133 support - this is quite a hefty amount of onboard peripherals, but standard for any high end motherboard. Downloading the latest BIOS is highly recommended as it allows for 533Mhz FSB support on older versions of the board.

Specifications
Strangely enough, VIA opt for the Realtek LAN adapter as opposed to their own brand - we aren't sure why this is, considering they would benefit from using their own. All of the integrated components are a good bonus, and most are certainly good enough - with the exception of the audio solution, as it is the most basic type available and would only really be suited to the most basic of systems.

Included Items
The P4PA comes in a standard motherboard box with standard extras included, although they do include a dual USB 1.1 bracket. The usual components are all included and allow you to get your system up and running without any extra cables.

The Custom I/O shield is needed for the LAN variant of the board, due to the LAN connection taking place above the USB ports. The standard version of the motherboard is PC99 compliant and will work with the usual ATX I/O shield.

VIA have seemingly designed this board for the power user, by the looks of the features encompassed. The BIOS also includes many in-depth settings which can be set according to the users knowledge. One interesting feature to note is that the PX266A chipset supports the current 1.5V AGP cards, as well as the older 3.3V ones - a necessary feature if you are intending to use an older AGP card in your system.


The location of the Power connectors is unusual, but actually advantageous to many other locations as it reduces the chances of impeding airflow from the CPU cooler, and provides a neat route for the bundles or wires. VIA have generally made a good job at ensuring an accessible layout, except for users with larger graphics cards - as they may have to remove the card to install memory into the first bank.​ 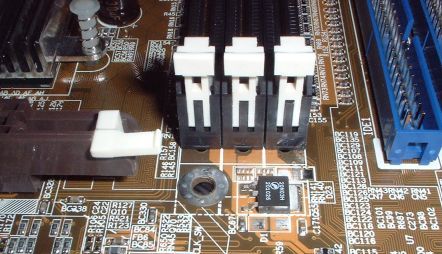 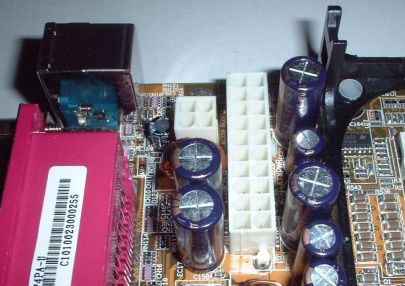 Convenient Power Sockets​
VIA actually state in the manual that this board is "designed to support overclocking" - quite an unusual, but very welcome statement! The BIOS features a whole range of options often not found in other boards, which allow for some advanced tweaking. The CPU core voltage can be set from 1.1V all the way up to 1.85V - a huge range of voltages that should satisfy any overclocker! Memory timings, bank interleaving and more options can all be set here.

The onboard sound is based on the VIA AC97 codec, and relies on the CPU to function. Gamers and audiophiles alike will no doubt want to use a different sound card, as this will only provide the minimum quality and performance. For a workstation sound card, this is adequate - as it is able to play most simple things without a hitch, just don't expect a surround sound experience.

This motherboard also comes with an optional onboard network adapter. Although ours didn't, we have seen this same adapter put to use on other similar motherboards to much success. Virtually all users will find this 10/100 LAN adapter ideal for all types and sizes of networking, as well as providing excellent compatibility will all of the common operating systems.

Two USB 2.0 ports are built into the motherboard I/O plane, with the two additional USB 1.1 ports located on an optional expansion header. Although there arent many USB 2.0 devices out yet, it is always good to have this feature as devices will appear soon enough (and USB 2.0 is backwards compatible).

As VIA state that this motherboard is designed with overclocking in mind, and have included a huge rage of BIOS settings for getting the best overclock, you would expect very good overclocking potential - and this board certainly delivers it!


The maximum overclock for this CPU is pretty high indeed with the stock HSF, although temperatures were rather high and the memory is high quality (as it is also being overclocked). The best combination that I found from the CPU was having the bus speed set to 134, effectively creating a 2.4B CPU with a 533Mhz FSB - it even shows up as this in the BIOS!​

The GA-8IEXP has some excellent overclocking potential, giving one of the best solutions available for P4 overclocking. The CPU core voltage only goes up to 1.725V, which although enough for most air cooling solutions, it may not be enough with watercooling - future BIOS updates may increase this value. The CPU socket may cause some problems with larger cooling solutions, as it can be a rather tight fit - the stock cooling solution was fitted without any problems at all though.​
Benchmarks

The main chipset and components used in this board are very similar to that of any other 845E motherboard, so the performance should be inline with other competing products if everything is working as it should.

The P4PA is benchmarked with a Pentium 4 1.8Ghz CPU overclocked to 2.4Ghz and 512MB PC2100 using Windows XP. These benchmarks compare raw performance characteristics between other combinations of hardware available:

The CPU performs inline with the SiSoft reference system, showing that the motherboard has no design flaws or serious performance faults. The slight variations in results are down to background applications and hardware differences.​

Memory performance has increased by about 10% over the prevision revision of the chipset, the P4X266, and it now on a par with the Intel 845x chipsets. The SiS 645 DDR333 and Intel 850 RAMBUS chipsets still take the overall lead with inherently faster memory.​
Gaming Benchmarks:

Gaming benchmarks were run using a GeForce 4 Ti4200 (tweaked for performance) on the same 2.4Ghz PC.

Using fastest mode in the Quake 3 "four" demo, the P4PA again beats the GA-8IEXP ever so slightly, both boards performing very well and up to expectations. Although the P4PA has a theoretically lower memory bandwidth than the GA-8IEXP, it still manages to overtake in this memory intensive game.​
Conclusion

The P4PA offers some good performance in a low cost no-frills package. Enthusiasts will like this board for its good overclocking potential and highly adjustable BIOS. This motherboard lags behind when compared to the likes of the Intel 850x and Sis 648 based products, so if you are after a RAMBUS based motherboard or something that is able to use DDR333, then these may be a more viable option.

All of the on-board features are welcome, The board remained stable throughout all testing, showing that this is indeed an excellent chipset, and a well designed board. For a decent performance, low cost motherboard, this is absolutely ideal - but any power users may want to look out for some newer chipset based motherboards that offer faster memory support. The issue with the AGP card obstructing the DIMM slots is annoying, but a fairly common problem - not really a concern unless you will need to access the memory often. Onboard RAID would have been an ideal addition to this type of board, but this can easily be added if needed.