The decline of the desktop PC


It used to be the case that if you wanted to play a video game, browse the internet, or do some office work, then you would need a desktop computer or a laptop. For a long while these were the only options, but we now live in a world of mobile devices and tablets, and PC sales have been falling in recent years.

Why are PC sales declining? What has brought about this change? And does it even matter?


The rise of casual computing
Touch-screen computers have been around for decades, but it was Apple who revolutionised the market with their first iPad in 2010. The user-friendly device revealed a whole new market for casual computing, and consumers began using technology in ways they hadn’t done before – in short, it filled a need people didn’t realise they had.

The release of the iPad took touch-screen technology into the mainstream, and other manufacturers soon developed their own devices. There are now a huge amount of tablets on the market, from smaller, rugged devices aimed at children, to high-end tablets used by graphics designers. It’s now common to take a tablet on a long journey, or have one in your living room, or even to catch up on the news / social media from your bed. These are all things that people didn’t tend to do with their PCs.

Since hitting the market tablets quickly gained popularity, but figures show that sales have actually declined in recent years. Despite this, you can see from the graph below that the sale of PCs (including desktop PCs, notebooks, and premium ultra-mobiles) has also declined at a steady rate since 2012 (when tablets were approaching peak popularity). 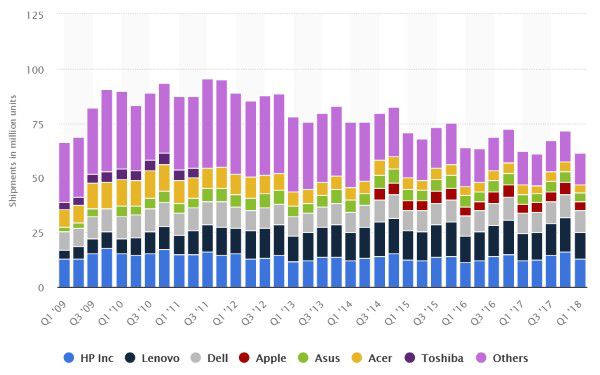 Quarterly global PC shipments by vendor (Source: Statista)​
It’s also interesting to note that despite Apple having lead the game to begin with, global tablet sales are now dominated by Android devices.

If tablet sales are declining, then why are PC sales also declining? It seems that although people are buying fewer tablets than they were, they are choosing not to return to PCs.


Smartphones and ‘phablets’
It would seem that people are getting fed up of having multiple devices that do similar things, and this is demonstrated by the increasing popularity of smartphones with large screens (the bigger ones are known as ‘phablets’, as they are a cross between a phone and a tablet). It is now possible to have a device that is convenient enough to use as a phone, but large enough to be used for things you would have previously used a PC or tablet for. In short, you don’t need to have both if you have a smartphone.

Global smartphone sales have been increasing year on year since the release of the iPhone in 2006, although last year did see the first (small) decline in the market. Despite that blip, sales are expected to continue to increase over the next few years, albeit at a lower rate. 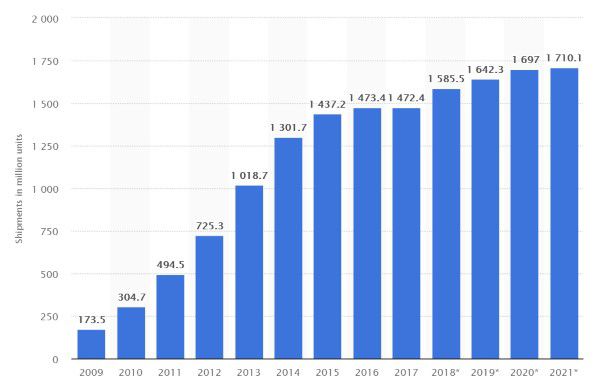 What does this mean for the desktop PC?
So, is it all over for the humble desktop PC? Probably not. Some things are just easier with a keyboard, such as typing, and if you’re familiar with a format you are more likely to stick with it.

One massive advantage that desktop PCs (and to a lesser extent, laptops) have over mobile devices is the ability to upgrade them. If you want better graphics for gaming then you don’t necessarily need to buy a whole new PC, you just need to upgrade certain components. If it’s overheating then you can improve your cooling. If new technology comes out, such as faster processors, then… well, you get the idea. This is an area where mobile devices cannot compete – they are designed to be small, and tend to have a far shorter expected lifespan than PC components.

Gaming is also, arguably, far superior on a PC. Gaming consoles have many fans, but what you see is what you get – if you want better graphics then you have to wait for the next generation console. Plus there’s the whole subject of virtual reality (VR); the best performance, the most games, and the best all-round user experience is found with PC systems, such as the HTC Vive or the Oculus Rift.

Desktops and laptops are not dying a death, but they are likely to become a more niche technology as time goes on. Many people just don’t need a PC anymore when they have a smartphone that does everything they need. Such is the way with technology; ever evolving.
Reactions: bootneck02