EE has revealed that it will be launching the UK's first 5G mobile service, which will be available in London, Manchester, Birmingham, Edinburgh, Cardiff, and Belfast from 30th May 2019.

The company has opened pre-orders for four new 5G smartphone and two other 5G devices (a home router and a portable WiFi hub) available on 5G contracts, which will go on sale on 30th May. The devices include the Samsung Galaxy S10 5G, the OnePlus 7 Pro 5G, the OPPO Reno 5G, and the LG V50 ThinQ.

EE has promised to role out 5G connectivity to 100 new sites per month. According to the press release, "in 2019 EE will also be introducing 5G across the busiest parts of Bristol, Coventry, Glasgow, Hull, Leeds, Leicester, Liverpool, Newcastle, Nottingham and Sheffield. And in 2020, even more towns and cities will get 5G sites including: Aberdeen, Cambridge, Derby, Gloucester, Peterborough, Plymouth, Portsmouth, Southampton, Worcester and Wolverhampton." 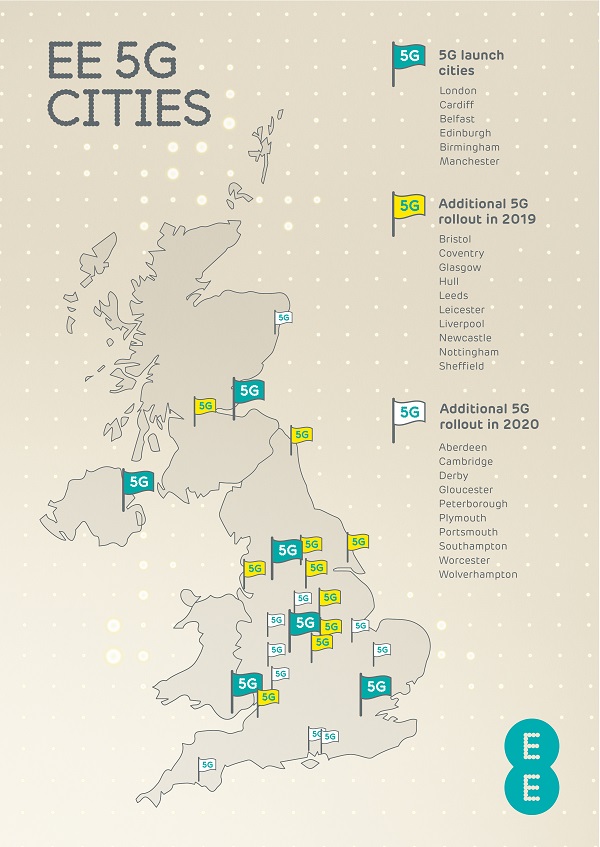 Source: EE​
So what can customers expect to get from the upgraded service? EE apparently expects their customers to "experience an increase in speeds of around 100-150Mbps even in the busiest areas" with some customers even breaking the one gigabit-per-second milestone on their 5G smartphones. By comparison, when EE launched 4G in 2012, the fastest speed possible was just 50Mbps.

Vodaphone recently announced that their 5G service will go live in seven cities with effect from 3rd July 2019.

The UK's 5G network infrastructure has been in the news for different reasons this week, as a result of the US trade war with China and resultant ban on Huawei products. The US have said that they will be unable to share intelligence with countries whose 5G networks feature infrastructure manufacturered by Huawei, which puts the UK in a difficult position. More recently, a top Chinese diplomat, Chen Wen, has said that 'there could be "substantial" repercussions for her country's investment in the UK, if Huawei were to be banned from Britain's 5G network.'