We’ve reviewed a lot of NAS units at PC Review over the years, but most of them have been from either QNAP or Synology – the “big players” in the market. There are only a handful of other companies making consumer level devices, Terramaster being one of them. At a basic level, a NAS is a “Network Attached Storage” device which allows you to store data on a dedicated unit which is accessible on your local network, often coming with additional server-like features. 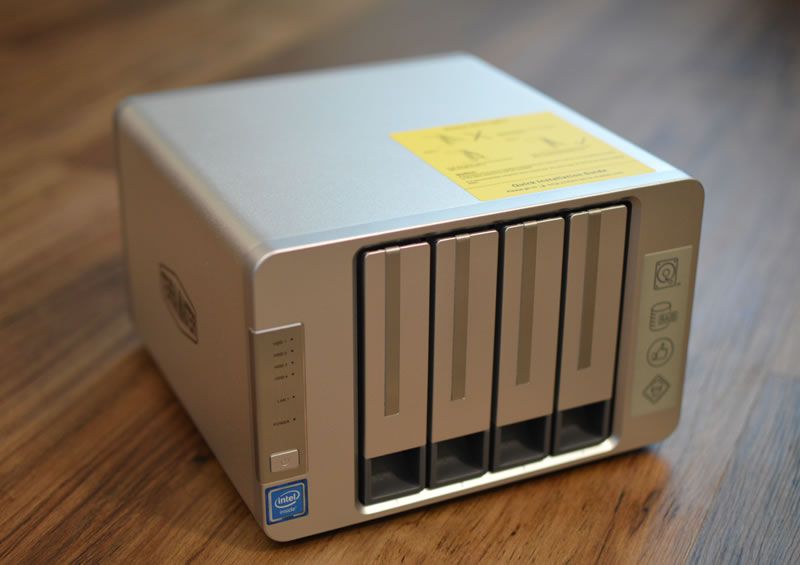 The TerraMaster F4-220 is a 4-bay NAS which features an Intel J1800 dual-core CPU, which is approaching mid-range by NAS standards. This is complemented with 2GB RAM and a single gigabit Ethernet port. These specifications seem perfectly adequate for a home/small office NAS, but as we’ll find out later, the hardware is only part of the picture. A significant benefit with buying off-the-shelf NAS devices is that they should come paired with excellent on-board software which can makes use of all that hardware. TerraMaster uses the “TOS” custom operating system, which appears to boot from an internal USB drive. 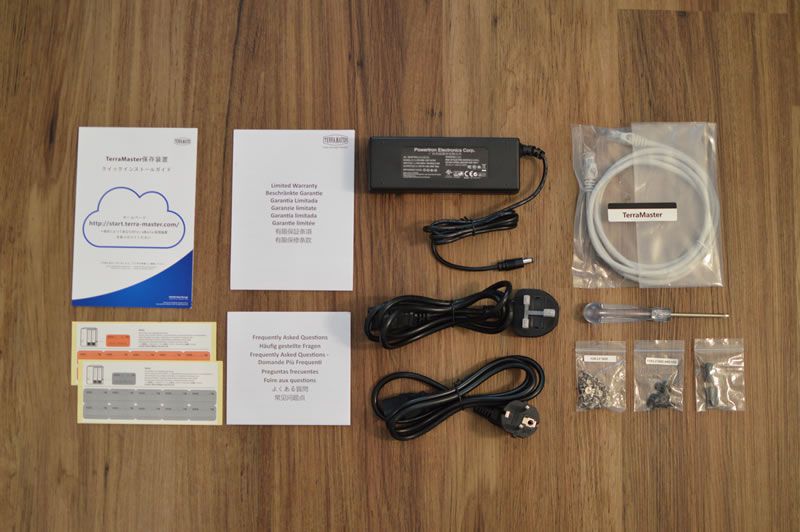 It is surprising to see the J1800 CPU in this NAS, as it’s an older desktop model – this isn’t a bad thing as it’s reasonably powerful and better than some of the other low-end chips found in budget NAS units. Likewise, 2GB RAM is plenty for a unit of this type, traditional file storage will likely only use a fraction of this total.

Externally, the F2-220 encompasses a textured aluminium enclosure with silver/grey plastic panels to the front and rear. It’s clean looking and as compact as can reasonably be, partly because it uses a power adaptor rather than an integrated PSU. The only interface on the unit is a front mounted on/off button with indicator LEDs for HDD activity, LAN activity and power: 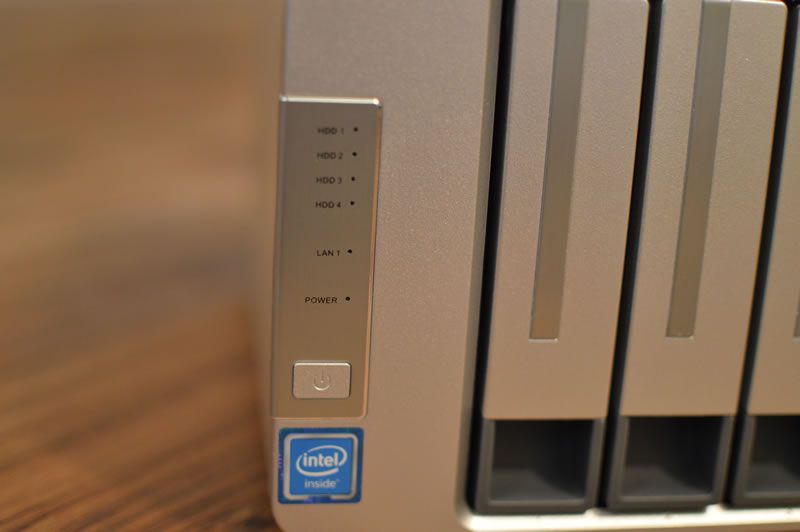 The rear of the unit is equally minimal, with ports only for power, USB 2.0, USB 3.0 and Ethernet. The inclusion of only a single network connection is an indicator of this being considered as a low-end NAS, as fallback connections are very common to see, but they may not be considered an essential for a budget or home environment. 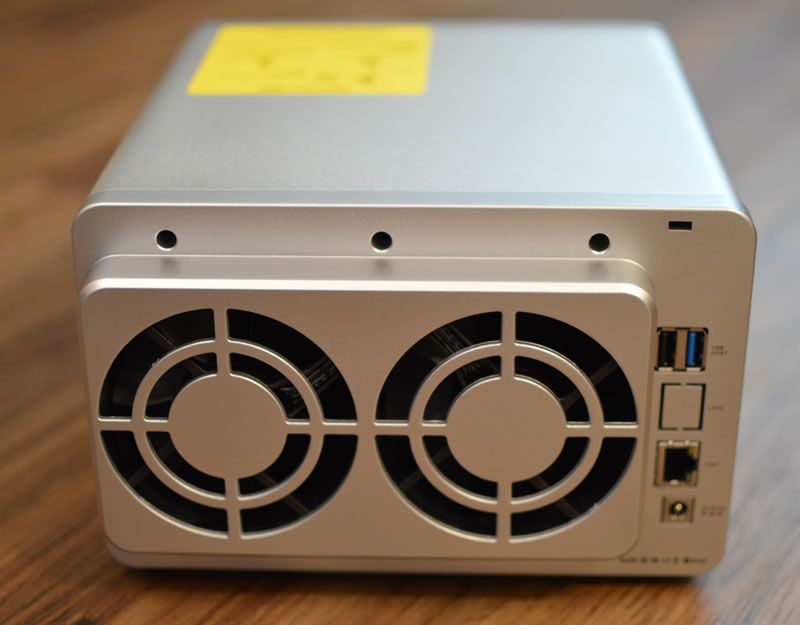 Installing disks in the F4-220 is a straightforward process, with familiar looking removeable drive bays used to mount the 3.5” or 2.5” drives. Once screwed in to place, we noticed very little noise from vibration during use. We chose to use a mix of Samsung drives (2 x 1TB, 2 x 2TB) so that we could try out a variety of RAID configurations. Once the drives are physically installed in the machine and it is plugged in, it was automatically assigned an IP address on our wired network. This can be found via a companion Windows application, or by manually typing in the IP address (if known) in to a browser. 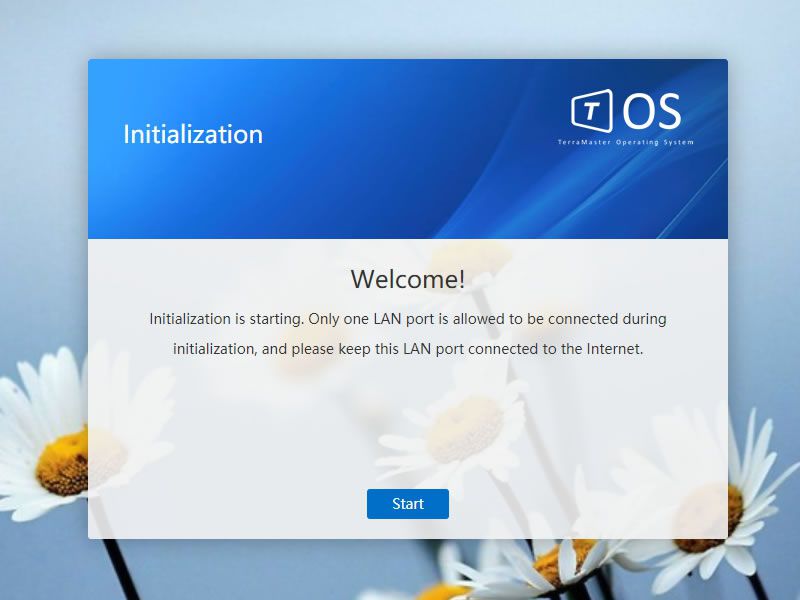 TOS Setup Screen​
When visiting the installation web interface, there is a prompt to download the current version of TOS from the Terramaster website to proceed with initialisation. It’s a little surprising to see that there is no version of TOS available to install by default, however the benefit is that you get the latest firmware available at the start of every new install. I was disappointed to note that the latest firmware revision was already 6 months old – this seems to suggest that the firmware isn’t updated on a frequent basis. As this NAS can be configured to be public facing (i.e. accessible over the internet), I would have expected monthly updates to ensure a reasonably secure OS. As an internal-only home NAS, this may not be a big problem, but it is worth keeping in mind.

edit: It looks like there are more regular firmware updates (monthly), but the build dates haven't been updated on the Terramaster website. This has been rectified since this review was published.

We chose to use to use RAID 5 during testing, as it’s the most common choice for this type of 4-bay NAS. This means that a single drive failure can occur and the data should remain intact (ready for drive immediate replacement). For more critical systems with 4 bays, RAID 10 would be a better choice… but given that this is a low-cost device, usable capacity is likely to be a more important consideration. 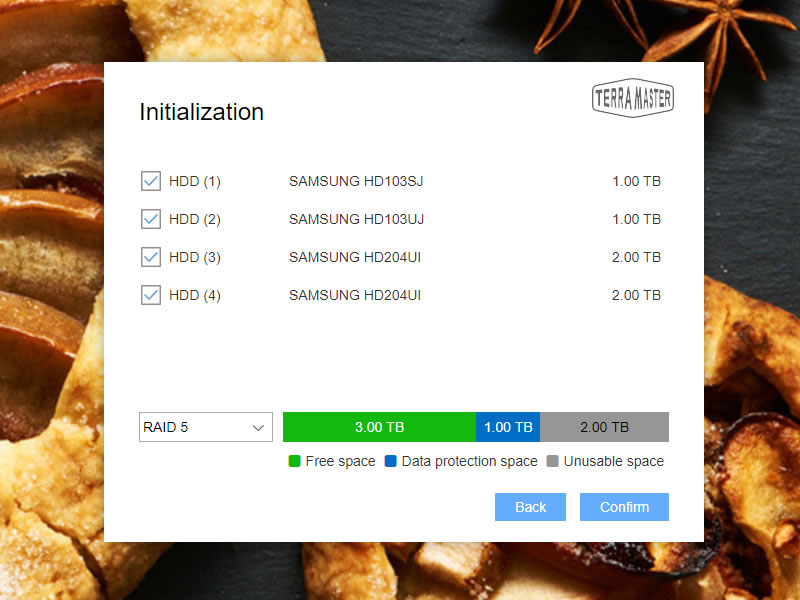 Drive Initialisation Process​
Overall setup took under 30 minutes and was as painless as any of the other major NAS manufacturer initialisation procedures. Once setup is complete, the TOS web interface will be available. This is an emulated desktop interface (very similar to QNAP and Synology) with icons available for different features. It’s very easy to use and seems robust (even if there are a few minor UI niggles): 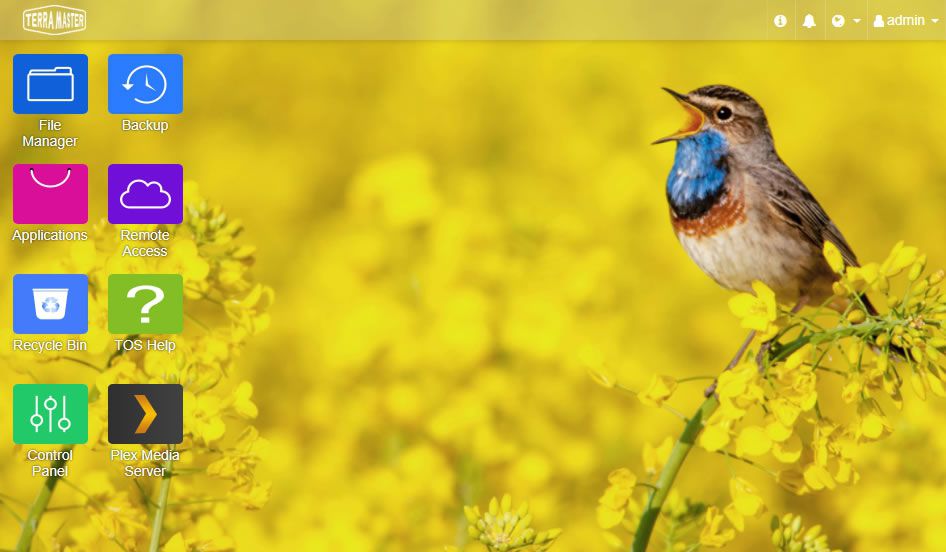 Terramaster TOS Desktop​
One of the first things to configure is the user access and file shares, this will allow you to store and access files on the NAS from elsewhere on your network. This is a very simple process and worked as expected – network shares were immediately viewable by accessing the NAS in File Explorer. Samba, AFS, FTP and NFS file sharing are all supported out of the box, which ensures compatibility with virtually every OS. 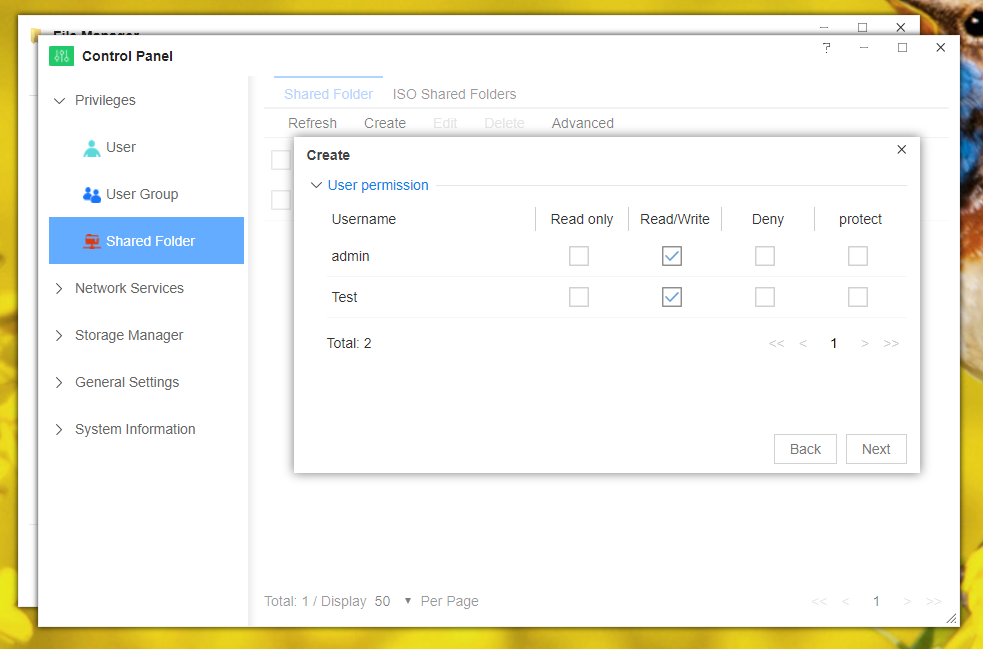 There are a minimal number of additional services available by default – just a web server (running an unknown version of PHP), RSync Backup and cloud access features. To expand functionality any further will require use of the Applications. The “applications” applet within the admin interface only lists 21 additional services at the time of this article, although the inclusion of Plex is an important one. The Plex package was also the latest public version, which hopefully means that it is regularly updated.

The limited availability of additional applications is a disappointment, as with the power available on this NAS it seems like wasted potential. All that would be needed is to include a Docker application, which would open the NAS to 3rd party developers and software with just a few clicks. There are thousands of possible apps that would happily run on this NAS within a Docker container, if only this was an option. On both the QNAP and Synology NAS units we have, Docker is one of the most heavily used features. Perhaps Terramaster could include this functionality in a future firmware update.

We tested the Plex application thoroughly and noticed no problems with their implementation – streaming within our home worked well across our client devices (without transcoding).

There are a few options missing which we would have liked to see, such as UPS power monitoring and improved encryption options (i.e. decryption required after each boot). Hopefully Terramaster will continue developing TOS and roll out these features in future updates.

We tested the NAS using a RAID 5 setup, which is typical for a low-cost NAS as it gives a degree of drive failure protection and maximises drive storage (likely important when budget is a consideration). There are many reasons why RAID 5 may not be a great idea, but it’s still one of the most popular options for 4-bay NAS units which is why we chose to use it. If you’re reading this article and considering RAID 5 for critical data, please re-consider and make sure you’ve got backups.

As there is only 1 x Gigabit Ethernet port on the NAS, maximum (theoretical) transfer speeds will be limited to 125 MB/s. During large file transfers we achieved an average write speed of 83MB/s and average read speeds of 105MB/s – very respectable transfer speeds, in line with the hardware under the hood. We used this NAS as a temporary file server for two weeks, during which time it acted as a stand-in replacement for our existing file storage/backup target. It worked reliably and without any noticeable difference in performance to our existing Synology unit.

The Terramaster F4-220 is a speedy NAS when it comes to file serving – it’s reasonable hardware with a Linux backend, so it’s no surprise that it performs well. However, the additional app selection is rather limited, especially given the x64 CPU and 2GB RAM. Other NAS units feature a much better app selection and have a larger team working on the backend OS, ensuring that patches are timely. Likewise, the web interface and companion apps for QNAP/Synology are much more polished – even if Terramaster’s TOS 3.0 is adequate. At the time of writing, the last firmware update was over 6 months ago, which is disappointing to see.

This NAS currently retails for around £200 (it’s listed at a higher price on Amazon, but a promotion is available on the product page to reduce this price). At this price, it’s a reasonable choice if the primary usage is for an internal file server or media storage. However, for just a small premium there are some much more versatile NAS units available. The alternatives may not be quite as powerful, but the feature set is hugely expanded.

Ironically, it’s possible that a good possible use for the Terramaster NAS is as platform for a custom server (similar to the HP popular Microserver series). It looks like it would be possible to boot to a custom OS via an internal USB port, which would open up the possibility of running more suitable software on this NAS. If we make any progress here, there will be a follow-up article.