The QNAP TS-459 Pro is the third NAS unit we’ve taken a look at from this Taiwanese manufacturer, which has so far impressed with home user and small office level devices. This particular 4-bay model is part of the business series and therefore comes with some higher level hardware, in particular the Intel Atom D510 CPU. 1GB Ram coupled with this dual core processor should provide plenty of computing power for this all-in-one server.

Like the QNAP servers we have previously reviewed, this model is more than just a file storage device (a traditional NAS). So many extra features are also included, which mean this server can often work as an all-in-one device for many small businesses. Other than storing files on network shares, you can use the TS-459 Pro as a print server, web server, database server, download/torrent station, media streaming and IP camera surveillance station amongst other things. There are even QKPG plugin applications which allow you to expand the NAS further, providing enthusiasts a way to code their own software or use some of the community maintained software (including some handy tools such as a mail server and Tomcat).

The NAS is based on nettop hardware, so it’s no surprise to see that there is custom Linux software powering the device. This works very well in the background, but it also means there is huge scope for improvement in functionality via firmware updates. There is even a VGA port for advanced NAS diagnostics should you feel the need to delve a little deeper.

There shouldn’t be any compatibility problems across a corporate network, as Windows, Linux and Mac protocols are all supported. Administration is performed through a web browser using a very nifty AJAX interface, providing one of the most impressive management tools of any current NAS. In this review, the NAS is connected to a network consisting of two Windows 7 PCs, one Linux laptop and a Sony Playstation 3 – all of which connect to and use the features without a hitch

As a business level NAS, there are all of the high level features that you would expect to see such as:
Contents and Overview

The TS-459 is solidly packaged and comes complete with a power cable, 2 x Ethernet cables, screws, keys, manual and software CD. This is everything that is needed to get your NAS up and running by plugging it in to your existing router. You can mount 3.5” or 2.5” SATA drives in the bays using the provided screws and then configure them via the web-admin interface. 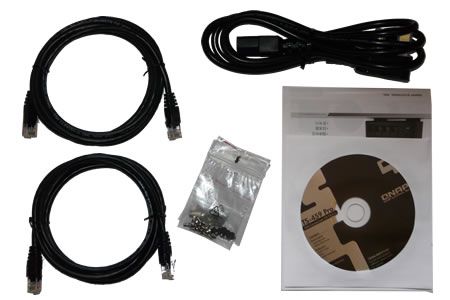 The front of the unit contains a 16x2 LCD status screen, power button, USB copy button, menu buttons and 4 drive bays. The brushed metal enclosure and plastic font panel are very solid, giving a real quality feel. There are also no rattles to any of the buttons or empty drive bays, which can sometimes plague cheap hardware. 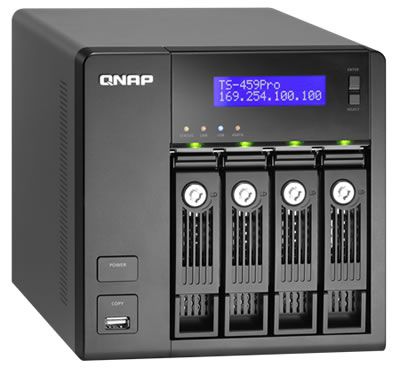 On the rear of the unit you will find 4 x USB ports, VGA port, 2 x Ethernet ports, 2 x eSATA ports, K-Lock point and a 3-pin power socket. There is also a small fan for the internal PSU, plus a larger diameter fan to cool the internal components (and drives). 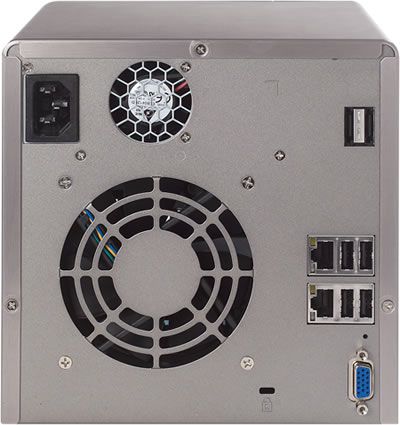 The 2 gigabit Ethernet ports allow you to connect to two separate networks or even use a failover/load balancing system if you are running in a more critical environment. The two fans are also reasonably quiet, especially under normal operating conditions. During system bootup or very strenuous activity, they do increase in speed and volume, but not any louder than a standard office PC.

Getting up and running is a very simple process, just insert the hard drive caddies with your choice of HDD, connect a network cable to your router and then power on the NAS. The LCD panel will let you know the current boot status (and you can even configure many settings from here if you wish):

Once the NAS has beeped, it is fully booted and ready for use. If you are using a newer operating system such as Windows 7, you can browse your network devices to see that the NAS has already appeared. Double clicking on this icon (or right clicking and selecting "view device webpage") will take you to the NAS admin and allow you to perform the initial setup and configuration: 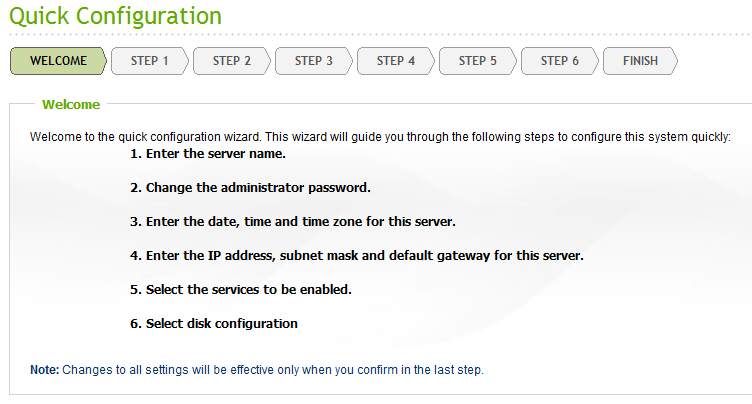 You’ll need to provide a handful of details before the TS-459 is ready for use, such as a password, hard drive configuration details, network settings and services to be enabled. Once the wizard is complete, the device will perform a quick initialization procedure while everything is set up for the first time: 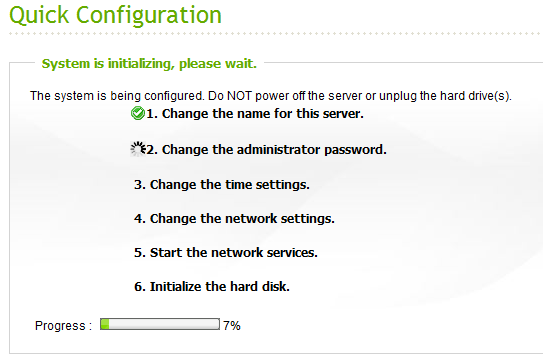 
The NAS is now ready for use and will now appear as a shared network device according the options you have answered.

The web-interface for administering the NAS is amongst the best in the industry, although it does need a reasonably modern browser (IE7+, FF3+) to take advantage of some of the best features. AJAX features heavily on many of the pages to provide instant status updates and real-time graphs. You can access the NAS interface by typing //QNAP (or whatever you called the device) in to your browser, which displays a flip screen of many common utilities you may wish to access on the NAS: 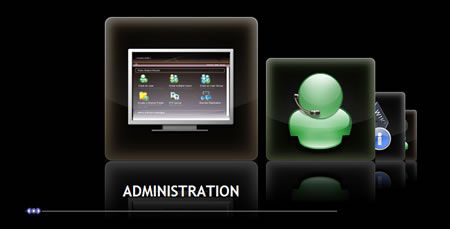 If you are performing anything relating to the administration of the NAS, you will need to log in to the full admin interface. This allows you to configure any of the features as well as set up security settings and view the status of the hardware: 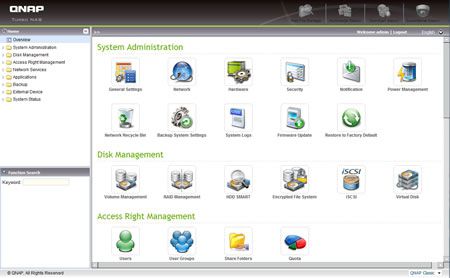 The QNAP TS-459 was tested using a direct gigabit connection via a 3m Cat5e cable and the latest v3.2.6 firmware. Both the NAS and PC are using 1TB Samsung Spinpoint F1 hard drives for benchmarks, with jumbo frames set to 7K (7418 MTU) where appropriate. The EXT4 filesystem is used on the NAS disk and NTFS on the Windows 7 PC.

​
For reference, the SmallNetBuilders website contains a detailed NAS benchmarking chart which includes this model NAS. They manage to achieve some slightly improved results, which may be due to differing hardware. If you are looking to compare NAS speeds of existing hardware, this list is very comprehensive and worth a read. At the time of writing, the QNAP TS-459 Pro is among the top handful of NAS units in terms of performance (approaching the limits of gigabit networking), which is reassuring to know.

To test the other TS-459 features, we used it in direct place of the current office NAS. During the 2 week testing period, we’ve used it in the following scenarios:
The NAS has been in constant use during this time and has functioned flawlessly throughout, across a whole range of devices. We even tried hostingsome of the website backups using the Apache and MySQL services, which worked surprisingly fast – although it would have been nice to have some more configuration options for these services, such as an easier way to edit the MySQL config file for advanced users.

This little NAS unit certainly packs a punch when it comes to features, and the benchmarks show that it is no slouch. A small business would be ideally suited to using one of these NAS units as part of the IT infrastructure, as it would allow file storage, printer control and the local intranet all to be managed from a small, low power device. The TS-459 Pro does the core job as a NAS extremely well indeed, but the extra features are what really make the product. Hot swapping, RAID configurations and eSATA mounting are all taken in its stride.

From past experience with QNAP firmware, it’s likely that this NAS will have an expanded feature set and capability over the next few years, as there have been some excellent additions to past NAS units (especially using the QKPG packages). The device is a mini computer running Linux, so there aren’t as many limitations as using proprietary hardware or software as with some cheaper solutions.

It’s not often that a product get’s a near flawless review, but every QNAP product we have reviewed has excelled. The downside to such a great product is that it doesn’t come cheap, but you certainly get your money’s worth. If your budget can’t stretch as far, there are 2-bay devices with similar specifications which may be more suited.