We took a look at the impressive QNAP TS-209 II Pro last year, a home/office sized NAS that provided plenty of features and became an essential part of a small office network. The QNAP TS-239 Pro is a next generation model based on the Intel Atom platform which includes even more features suited to an office environment (such as iSCSI). This NAS includes two drive bays (providing up to 4TB storage) and the unit size has been reduced substantially to a mere 214x175x115mm.

This little NAS includes a 1.6Ghz atom CPU, 1GB DDRII memory and two gigabit LAN ports – which is much more powerful than many competing devices. Not only does this improve the performance of some elements (such as the PHP/MySQL server), but it ensures that a larger number of clients can use the NAS without performance degradation. Similar to other QNAP variants there are 12 primary functions which the NAS unit can perform:

Getting the NAS up and running is as simple as loading the drive caddies with a SATA HDD, attaching the power adapter and connecting a network cable to a router. Everything apart from two hard drives is included in the TS-239 Pro Turbo box, so it takes very little time to complete the installation procedure. 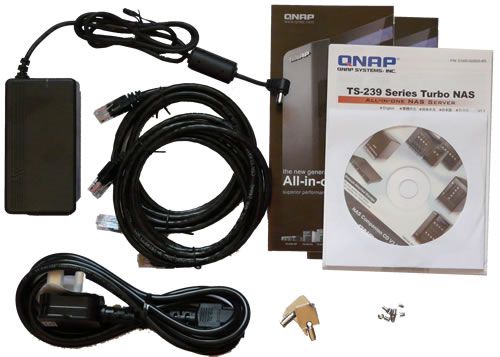 The unit design is simple and effective, with the front of the unit including 4 status LEDs (HDD1&2, LAN and eSATA activity). Underneath these are a USB port and 2 buttons, one to turn the unit on/off and another “one touch” copy button to initiate quick USB transfers (which you can configure in the NAS setup menu): 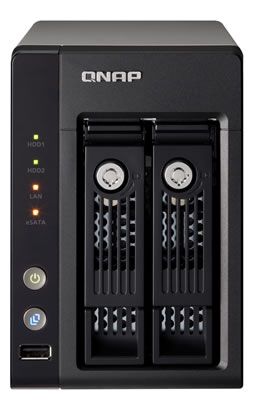 The drive caddies are simple drive trays that require 4 screws to secure a SATA HDD in place. Once this is done, it can be pushed back in to the NAS unit and locked in place. Some other NAS units don’t include a way to secure drives in place, so this is a welcome addition.

The rear of the unit has a power socket, 2 x eSATA ports, 2 x LAN ports, 2 x USB ports, a K-lock slot and most interestingly of all a VGA port (more on this later): 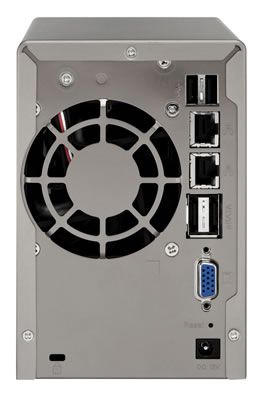 Once you have set up the hardware side of things, just turn the unit on and browse to the web-admin page to begin the configuration. It is often easiest to use the QNAP software the first time you connect to the unit, as it will open the web-administration panel so you can begin the configuration process. The very first time you connect to the NAS with a new pair of HDDs, you will need to format them and configure your RAID setup (if used). Should you desire, contents of the drive can be encrypted via 256-bit AES security. 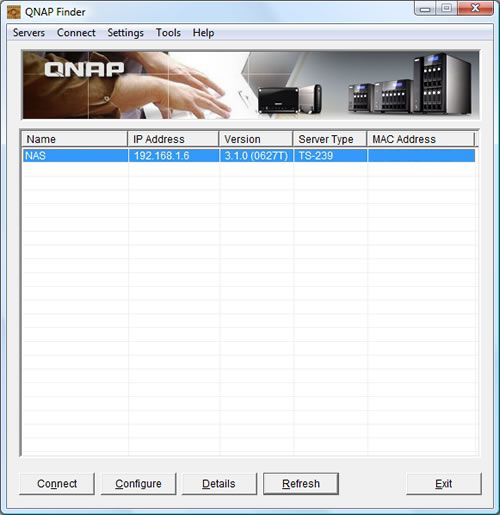 Many of the standard file hosting and PHP/MySQL features are identical in functionality to that of the TS-209 Pro II, so it is worth reading pages 2 and 3 from this review (http://www.pcreview.co.uk/reviews/Storage/QNAP_TS-209_Pro_II/2/) to read about the core elements of the NAS. Instead, this section will focus on the advanced features, improvements and changes since the previous NAS was reviewed.

QNAP have recently adopted a new web management interface (v3) which has been rolled out across all the new product lines, and reassuringly is backwards compatible with older NAS models. This new software visually improves the already impressive interface, and makes the most of AJAX features without going overboard. 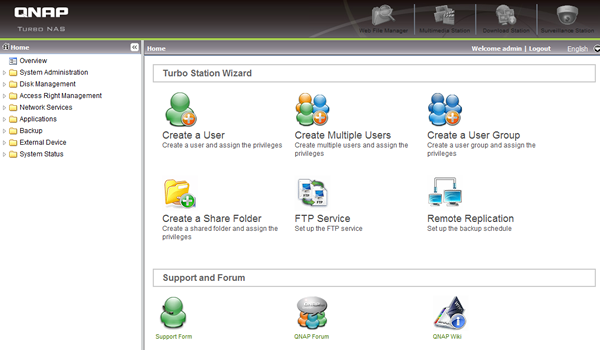 One of the new compelling features of the TS-239 Pro Turbo is the ability to serve as an iSCSI target server, allowing you to create virtual drives on other remote computers (essentially allowing the exchange of SCSI commands over IP networks). This type of feature moves the unit towards small enterprise/SOHO environment, rather than a home user.

The NAS is also equipped with dual LAN ports, partly to increase reliability via failover should one network port/cable stop working. The other advantage to this is it enables improved performance via load balancing, by connecting the NAS to two separate routers/LAN areas. There is also an option within the web admin for the NAS to be deployed with two IP settings to serve different subnets.

There are also more subtle additions to the QNAP feature set, such as advanced power management. One of the few disappointments with the TS-209 II Pro was the lack of a power schedule, meaning that it had to be turned on/off manually overnight (assuming it isn’t in use). The TS-239 Pro Turbo has the ability to set a power schedule, for example you can turn the NAS on every morning at 7AM and off again at 8PM if that is only when it would be in use. There are also options on how the NAS should recover after a power failure, and more importantly there is proper UPS integration.

The rear VGA port may be a surprising addition for a NAS unit, but don’t forget this is essentially a fully functional PC with a 1.6Ghz Atom CPU and 1GB RAM. The QNAP backend is just a customised version of Linux, so you aren’t too far from a fully functional PC when connecting a USB keyboard and mouse. No doubt this will provide the modding community with some great hardware to put to other uses: 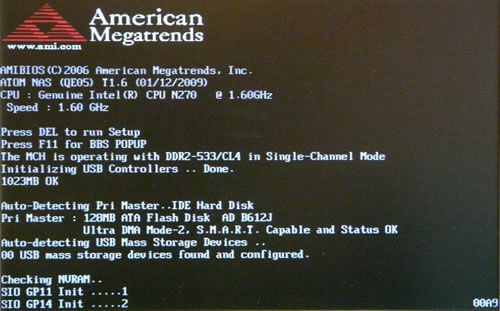 The USB and eSATA ports work as expected, allowing you access to FAT, EXT3 and NTFS drives and USB printers. It should be noted that if you have an all-in-one printer/scanner unit than the scanner will not work via sharing, and will need to be used standalone. The front USB port can be used as a quick copy port (for example a USB drive loaded with photos), so pressing the quick copy button copies or synchronises the data to a folder on the NAS.

Since the last NAS review, the number of QPKQ modular software packages available for QNAP units has increased, allowing you to expand on the core functionality by adding all sorts of additional applications. Examples include mail servers, newsgroup downloaders, eMule client, content management systems and more. There appears to be a keen group of enthusiasts working to increase the number of packages, so functionality may improve still.

The TS-239 Pro Turbo seen in this review has been in constant use for 4 weeks now, used every day in an office environment. There have been no issues with stability, noise or reliability over this time and the power schedule works perfectly. The test computer (Q6600, 4GB Ram, Vista 32-bit, Atheros gigabit network adapter) is connected to the NAS via a Linksys gigabit router, with anti-virus software temporarily disabled to prevent any network slowdowns. Two identical 1GB SAMSUNG HD103UJ hard drives were used in non-RAID mode during testing.

The first test performed was the copy performance of a 2GB file, providing a good estimate for expected read and write speeds for large file transfers. Interestingly, write performance was slightly higher than read performance in this case (most likely indicating that the bottleneck is not with the NAS, but the drives used). Read and write performance hovered around 57-58MB/s each time the test was performed (57.5MB/s read and 57.9MB/s write as seen in screenshots below): 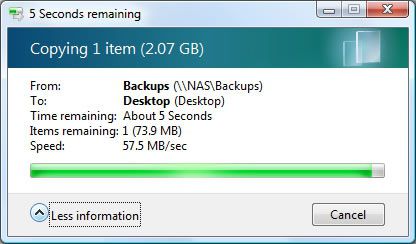 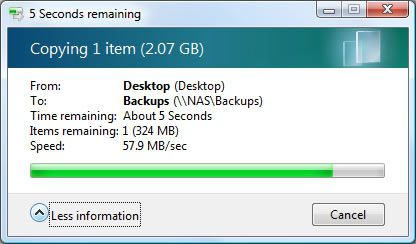 To check smaller file transfer speeds (which take proportionally longer), a 1.3GB directory of 378 photos was copied to and from the NAS, averaging at around 44-45MB/s for read and 35-35MB/s for write speeds: 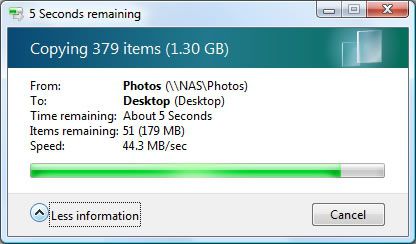 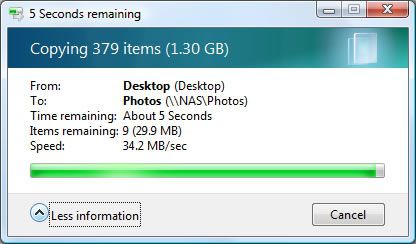 The data transfer performance compares well with other NAS units, which is unsurprising given the power of the hardware within the TS-239 Pro Turbo. As with the previous review unit, this is a well thought out product which is ideal for a small office environment. The beauty of this NAS is that is can be used as a file and print server, but it is also powerful enough to run a local intranet and control a remote IP webcam security system! Home office users would also benefit from the media functions of the server.

The TS-239 Pro Turbo doesn’t come cheap (at around £400), but for that price you get a quality all-in-one solution that is significantly more powerful than just a standard NAS. The feature set is second to none, with performance and build quality just as high. It is difficult to critique a product with no obvious flaws, as the NAS exceeded expectations and has done a very solid job for a month of continual use. The only suggestion I have to improve the product would be to investigate screwless drive caddies, as a tool free approach for fitting a drive is always welcome.