With the proliferation of “smart” devices, it’s quite likely that you’ve got an increasing number of products that demand a Wi-Fi connection within your home. Many standard Wi-Fi routers simply can’t provide good enough coverage of a property, so Wi-Fi extenders/repeaters have filled this void until now. These have a fatal flaw, in that the maximum speed halves at each repeater and there are problems with handovers when roaming between access points.

Mesh Wi-Fi networks aim to solve this problem by distributing nodes around your home, connected via a separate network backbone. This eliminates the problem of ever decreasing speeds and means that expanding the mesh network is relatively easy to do (as it has been designed from the ground to work this way). 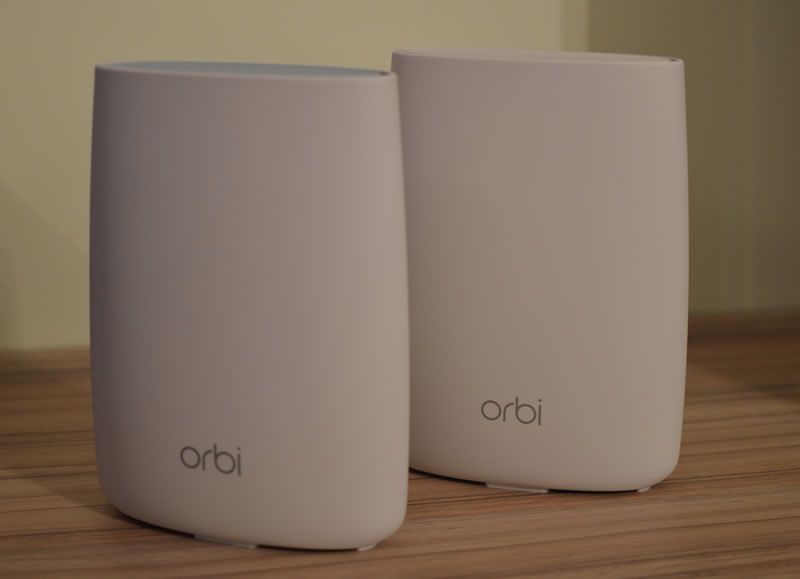 Orbi Router and Satellite​
There are lots of competing mesh Wi-Fi products coming to market, including AmpliFi, Eero and Velop. Some of them are small units that operate in a true mesh fashion (i.e. they will link to any other node to expand the network), others like the Orbi operate in a star topology, where a central node is required (and all other nodes must connect to this). It was disappointing to hear that the Orbi isn’t a true mesh network, as it’ll be limited in node coverage – however the sheer power of each node, combined with a tri-band backhaul, should be far more powerful than other systems on the market. Two Orbi units should cover 4,000 sq. ft. of house (inc walls, stairs, etc.) – so it’s likely that a paired pack will suit most premises.

One of the first things you’ll notice about the Orbi units is that they are large – much larger than most other mesh networking products (likely due to the improved antenna array, which provides the larger range). The design is inoffensive and unobtrusive, with a modern feel – you could easily leave this in view and not notice it is tech hardware.

Specifications
We’ve been using the Orbi for two months now, replacing a 2.4Ghz Draytek router + access point combo that worked well for several years. The previous setup had good range, but speeds were very limiting once you approached difficult to reach parts of the house. The reason we upgraded to Orbi was to avoid wiring in an Ethernet cable between the ground floor and 2nd floor of our house. The Orbi backhaul has a theoretical maximum throughput of 1733 Mbps, and although this won’t be reached, it could at least go some way toward to competing with a hard wired 1000Mbps connection (and it’s much, much easier to install).

Router Rear Connections​
Our current configuration has the Orbi router and satellite placed on separate floors, at opposite sides of the house (approx. 14m apart). This isn’t the recommended placement for optimal Wi-Fi coverage, but we rely heavily on the wired connection as a bridge between floors – so we have PCs hardwired to the router at one end and a server connected to the satellite at the other end. 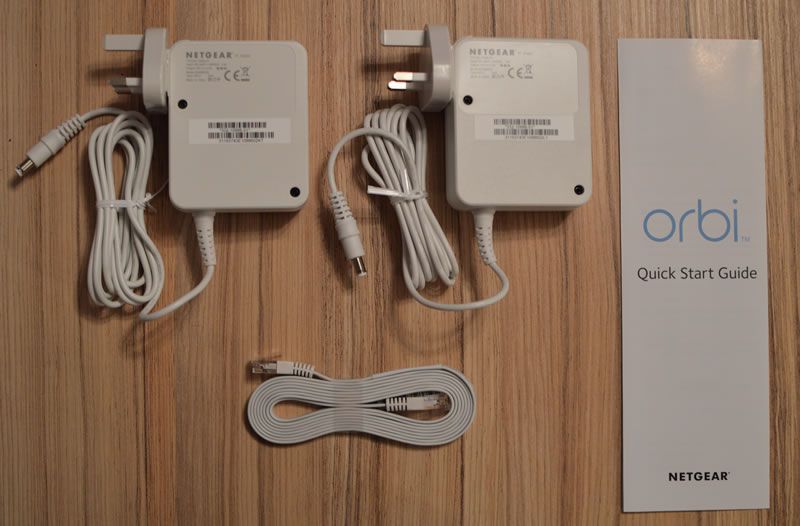 Beamforming and MU-MIMO are both supported, which should further maximise wireless range and throughput, especially when dealing with large numbers of clients. Most high-end routers support these technologies, so it’s no surprise that Netgear have included them on the Orbi.

The ability to set up a separate guest Wi-Fi network has recently been added, so you can isolate other users from the rest of your network. This is handy if you have devices on your network that you wouldn’t want visitors to have access to (such as file shares or media devices).

An OpenVPN server is built in to the router, so you can securely access your network from a remote location. OpenVPN is probably the optimal choice for a home VPN server, so a big thumbs up to Netgear for providing a robust solution. Some competitors lack this option and instead provide older, less secure VPN protocols.

The rest of the feature set is comparatively basic, especially when compared to routers from the likes of Draytek. It’s clear that the aim was to provide a very, very powerful Wi-Fi solution without much fuss. There are some parental controls, QoS, DDNS and scheduling features – but power users may be disappointed with the lack of control available. It works well, but you won’t find an infinitely customisable firewall or other advanced controls. If you require something like this, you may want to run the Orbi in AP (access point) mode and use a more featureful router.

As the Orbi is a Router and Satellite(s) combo, you will first need to connect the Router to existing modem and power it on. Once it has powered up, you can then take the satellite and power it on in an optimal location further away. The satellite has a coloured LED ring at the top of the unit which will light up blue if the connection is “good”. If it turns amber, the connection is “fair” and it may be better to move the units closer together. They are pre-paired out of the factory, although it isn’t difficult to pair additional units using the “sync” button. It’s as close to you can get as a plug-and-play mesh networking setup.

The rest of the setup process can be done via a smartphone app, or via a web interface. Many competing products don’t include a browser accessible web interface, which can be a much more convenient way to change settings and upgrade firmware – especially if you are troubleshooting wireless connections. The setup is a straightforward guided process, which would pose no difficulty to most computer users. 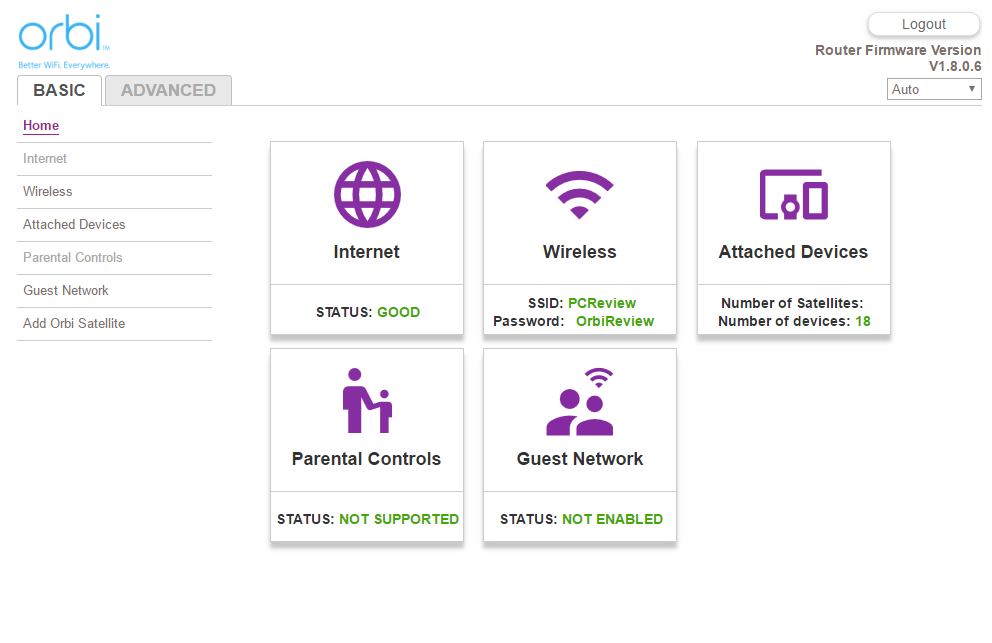 Admin Web Interface​
When we first purchased the system, the ideal setup would have been to have an Orbi on each floor (with the central Router on the middle floor). This is overkill in terms of Wi-Fi coverage, but allows for maximum backhaul performance. However, it isn’t possible to buy the separate expansion Satellite in the UK at the moment (it is due to be released some time in Q2 2017) – this seems like a huge oversight for a product marketed as a Mesh networking product.

The initial expectation was that two nodes would struggle to set up a 5Ghz backhaul at this distance (14m, through several floors and walls). We were proven spectacularly wrong, when the Orbi router and satellite connected with a “good” signal strength.

The Orbi provides both 5Ghz and 2.4Ghz Wi-Fi – the former of which is much faster, but has a shorter range. If you have old hardware that is only compatible with 2.4Ghz networks, or you are out of range of 5Ghz, you’ll fall back to the slower 2.4Ghz spectrum. However, you can’t force which network you join – the SSID (network name) of both access points and both Wi-Fi spectrums will show as a single network.

Throughout a large house, we get a full-strength Wi-Fi signal in almost all rooms – and a strong signal in the garden and previously difficult to reach places (such as the utility room, which has several thick walls between it and the router). It’s unlikely that many properties would require three Orbi nodes, as the backhaul signal is remarkably powerful – no other Wi-Fi products have been able to bridge this gap in our house before (we previously relied on Homeplugs to cover weak Wi-Fi areas).

To benchmark Wi-Fi performance, we performed large file transfers from a NAS that is hard-wired to the Orbi Router and benchmarked the performance at different locations throughout the house using a Dell XPS 13 Laptop (using a Killer AV 1535 Wi-Fi NIC). Distance is measured from Router:
Even with a fibre 100Mbps internet connection, the Wi-Fi speed at any of the locations throughout the house could handle the throughput.

With the router and satellite ~14m apart, across three floors with several walls in-between, we achieved an average backhaul transfer speed of ~36MB/s (~288Mbps). This was using a less than optimal placement for Wi-Fi performance, but stretched the possibilities of what could be achieved using the backhaul as a bridge. The figure may not seem particularly impressive at first glance, but other combinations we have used to bridge this gap have either failed or resulted in extremely slow transfer speeds across a 2.4Ghz link. When we reduced the gap to ~8m over two floors, the backhaul transfer increased to ~82MB/s (~656Mbps) – a very healthy performance.

This is one of the most powerful mesh networking products on the market – if you’ve got a house that is difficult to cover from a single router, the Orbi may solve your problem – at a price. At £369.99, this is nearly double the cost of a high-end router – which almost makes sense given that you received two devices instead of one. Even still, that is very expensive.

Competing mesh network products are less powerful, requiring more nodes. Many also require an internet connection to manage the devices in the cloud, whereas Orbi has a local web interface for management. Only the Linksys Velop can compete in terms of raw performance and signal strength.

The Netgear Orbi is surprisingly powerful and reliable, but you pay a lot for that privilege. At £200, this would have been a hands down winner, but at £369.99, you really need to have problematic Wi-Fi coverage to justify the price. The simple setup and incredible range mean that the Orbi is one of the best performing Wi-Fi solutions that a home user can buy. If you’re struggling with Wi-Fi speed/range issues, this will likely solve them.