The disk storage scene has changed a lot in the last few years, and one of the more recent advents has been the introduction of the SATA interface. The transition from the old PATA (Parallel ATA) standards to the new SATA (Serial ATA) has long been planned, and is here to stay. The next planned generations of SATA are due to be released in Q2 2004 (Generation II SATA) and Q2 2007 (Generation III SATA).

The interface should offer improved speeds and the ability to connect devices other than hard drives. However, as this is only the start of SATA devices, the advantages are still only minimal. Not all motherboards come with a SATA controller onboard at the time of writing, but this should change in the coming months. 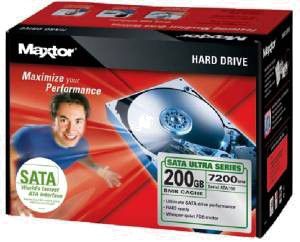 We received the Maxtor DiamondMax Plus 9 200GB SATA/150 for this review, which has a theoretical maximum transfer speed of 150MB/s - slightly faster than the maximum PATA speed of 133MB/s. Thankfully, this drive features a standard Molex connector, meaning that you are able to connect this to your current power supply, without having to purchase a separate adapter to convert to the proprietary SATA Power connector.

Specifications
As you can see, this is the SATA version of the ATA133 DiamondMax Plus 9 drive we reviewed earlier. The only differences are, of course the SATA interface, but also an increase of cache from 2/8mb to 8mb. This 8mb of cache is huge compared to most drives available, and has a speedy 6ms response time The cache is used to store data from the drive when it is likely to be used, this speeds up the time needed to recall data as it can be read directly from the cache instead of waiting for the drive to find and read the information.

Included Items
This is the usual bundle to expect with such a hard drive, and is enough to get you up and running as long as you have a SATA header on your motherboard, or a separate interface card.

SPS is designed to ensure that any sudden shocks to the drive have a minimal effect on the operation of the mechanical components, the most common problem being "head slap", where the disk head slaps against the platter, causing surface damage. Some more information on SPS can be found here.

DPS is a method of checking that the data written to your drive stays intact over long periods of time. As soon as a potential problem is detected, the data stored in that area of the disk is moved to a safe location - preventing possible data loss in the long run.

The drive also utilises fluid bearings, which is supposed to give a near-silent running drive. You can still hear the drive when performing intensive tasks, but this is minimal compared to a case fan.

As you can see from the pictures below, the physical interface to the drive has changed considerably from the old. There is a new SATA power connection, which may require an adapter to utilise if you have an old power supply. Thankfully this Maxtor drive is able to use the old 4 pin Molex power connection, as well as the SATA power connection. The data cable is also a lot smaller, even smaller than a rounded ATA133 cable.

There is no master/slave configuration needed when connecting these devices up, you just have a simple Primary and Secondary header, to which you can connect only one device.

Maxtor primarily aim this hard drive as a multimedia storage device, as can be seen from the high storage capacity and the fast access times. This should be one of the fastest drives of this size, and the results seem to back up this theory.

Using HDTach we can see the read performance, spanning the whole range of data positions. A decline in sequential speed is expected as we get to the end of the data range:

As you can see, the access time of 14.1 seconds is almost 5ms above that of the theoretical time quoted in the specifications - which is to be expected, as these are real world performance tests. 14.1 seconds is a reasonable access time to expect, nothing mind blowing by any standards - although the burst speed rate of 104.3MB/s is very high indeed!

Compared to an average hard drive from the previous generation, this seems to offer quite a large performance boost, particularly in data transfer speeds. Although this is the highest transfer rate we have recorded at PC Review, it still does not even come close to the 150MB/s bandwidth capacity possible with the SATA interface.


Performance​
SiSoft Sandra is a good synthetic benchmark test, which is excellent for a baseline comparison of drives. Several ATA100 drives are listed in comparison, ranging from low to high end - but the DiamondMax Plus 9 SATA beats them all by a large amount.​

With a score of 37920kB/s, this is one of the fastest drives we seen so far. The synthetic values are slightly higher than those of HDTach, but they do correlate.

As you can see, the new Maxtor drive outperforms the old ATA100 drive by quite a margin. None of these speeds are approaching the 150MB/s limit, but they are still some of the highest results we have seen.


After using several large capacity hard drives over the past few months, this is one of our picks of the lot. With a price of between £100-£150 at the time of writing, this seems like a good deal for the capacity of the drive - irrespective of the speed. Luckily, this is also one of the fastest drives we have seen.​
This drive seems future proof with its SATA interface, 8MB buffer, and silent running, but there is a much more important point to consider... the warranty. According to Maxtor's site, this drive comes with a 3 year warranty ("Maxtor DiamondMax Plus ATA drives that have an 8MB cache buffer AND capacities of 120GB or greater will carry a Standard Warranty Period of 3 years."), but this is worth checking when purchasing your drive (OEM or retail).

One thing worth noting is that this is almost identical to the non SATA version, and appears to be a PATA drive simply converted to SATA using the Marvell 88i8030 Serial ATA Bridge chip.

Heat and noise do not seem to be a big issue with this drive, as it has been running without any extra cooling or noise dampening to no ill effect. The drive does get warm, but only to the same extent most other 7200RPM drives do.