The Landisk NS347 Hard Drive Enclosure is a very cost effective way of adding extra storage space to your network. This is more often called a NAS (Network Attached Storage) device, as it simply hooks up to your existing wired LAN and provides network shared storage. At under £30 it is one of the cheapest NAS devices available.

The specifications of this particular drive are as follows:
It is important to note that this device will only accept an IDE drive, however this may actually be a benefit to some users as it provides a cheap way of reclaiming an old drive as network storage.

The casing has a brushed metal finish and has a surprising feel of quality about it, and looks rather stylish. It would be particularly suited to owners of brushed aluminium tower cases: 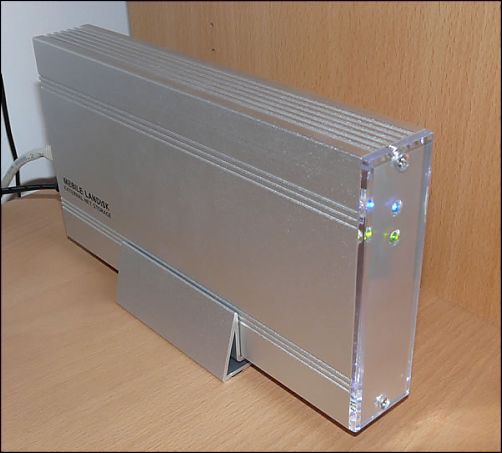 The read of the unit features a USB 2.0 port which allows you to attach this to a PC and use as an external drive, a handy extra feature should you wish to use the Landisk as a portable storage device. Next, is an ON/OFF switch should you wish to turn the drive off at any point, to the right of this is the LAN port to connect the drive to your network. The final connector is for the 12V power supply:

Installing the IDE hard drive into the enclosure is extremely easy, simply remove the thumbscrews at the rear to slide out the internal drive tray. Then, screw mount the drive on the tray and connect the IDE cable and 4 Pin Molex connector: 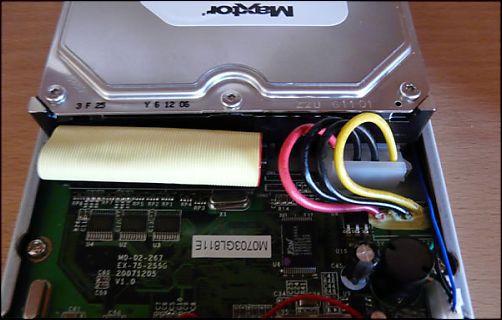 ​
The physical installation procedure takes only a matter of minutes, but the drive must be configured before it is ready for use. You need to give the drive a clean FAT32 format before you can use the drive, which you can do over the web admin interface. This means that if you have any existing data on the drive it would be wise to remove this first.​
If you plug the Landisk drive into a router, it will automatically be assigned an IP address on your LAN. Simply type this (or the host name you assign it) into Internet Explorer and you will be taken to the web admin page: 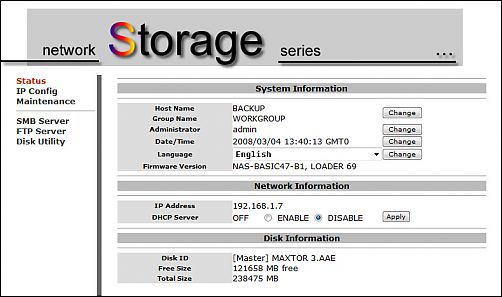 This will allow you to configure network shares, FTP access and other disk tools (such as scandisk). SMB shares can be created which will show up as you browse your network in Windows, and these are stored as individual directories on the disk. This allows you to split your storage into any way required (i.e. a share for Photos, Movies, Documents etc...):
​

​
The FTP function will let you connect from a remote computer to transfer information to/from the NAS disk. This is a great feature if you need to back up information to your home from an outside source. This can use separate shares to the normal SMB list and will likely require some configuration from your router.

This Landisk has been fitted with a Maxtor 250GB IDE 7200RPM drive, formatted within the web admin interface and then loaded to around 50% with backup files. This connected to a 4 port router with built in wireless, and the access PC is also using a PCI wireless card to connect (at 54Mbps) and Windows Vista.

When copying large files (such as zip archives) across the Network, network transfer rates of 0.7Mbps are common. Copying lots of smaller files (in this example, 500 x <100k files) results in a slightly slower transfer speed.

Strangely, writing to the NAS drive resulted in transfer speeds of 2.2Mpbs. Again, copying several small files decreases the speed slightly as would be expected.

This does not seem to make any sense when compared to the performance of other NAS drives as normally the read speed should be slightly faster, not considerably slower. Accessing the network share from a Windows XP laptop provided similar results, indicating that the problem isn't down to Vista networking problems.

Network read transfers of under 1Mbps are too slow for this type of storage, and it appears that some other users have complained about the poor transfer performance and reliability on a users blog at icablog.org.

This article will be updated if the cause of the slow network speeds can be identified (or rectified via a firmware update). The USB transfer mode worked as expected and provided a decent transfer rate.

Although the Landisk initially looked like a promising hardware device, with a good looking and study enclosure, the performance of the unit is a real letdown. The features of this model work well, however the slow read speed significantly detracts from the device - it is such a fundamental issue which other similar products don't suffer from.

If the transfer speeds can be fixed via a firmware update then this would be a really good purchase. However in the current state it could not be recommended, unless you are using it primarily in USB transfer mode.​