All-in-one security packages are one of the most popular and easiest ways to secure your computer from a wide range of threats, however not all products perform to the same standard. Kaspersky Internet Security 2009 includes an anti-virus scanner, anti-spyware scanner, firewall and parental controls. All of these features are integrated neatly into the control panel, which sits in the system tray and provides quick configuration and scan access. There are graphical improvements since the previous version of KIS we reviewed last year, but users that upgrade will find the interface familiar: 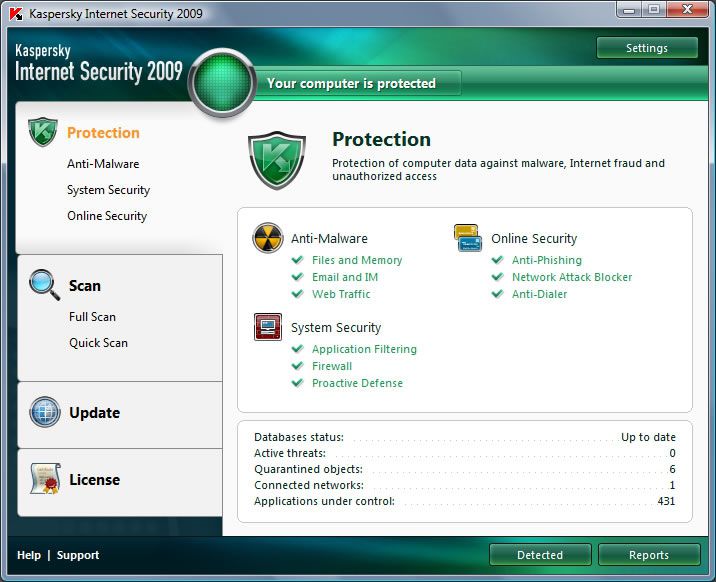 Using the default scanning options there was no noticeable decrease in performance whilst using KIS 2009 over several weeks (on a Q6600 Quad Core system with 2GB Ram). The only time at which there appeared to be a delay was when opening large installation packages, which are scanned when opened for the first time. This only adds a few seconds on to the initial opening time and this is to be expected with any active AV scanner. The system resource usage is relatively light compared to some scanners that cause a heavy RAM footprint and a flurry of HDD activity on the slightest action. Scanning speed also seems faster than previous versions, in both on-demand and on-access mode.

The most important component of KIS 2009 is undoubtedly the anti-virus scanner, which is the backbone of protection for any computer. Some of the most comprehensive AV testing is done by a company called AV-Comparatives, which test a variety of scanners against a huge database of viral infections. This is one of the most effective ways of measuring the performance of AV scanners, and provides a much more representative result than personal testing. In the latest test of on-demand AV scanners (Feb 09), Kaspersky is tested alongside 16 other products in their default modes. A 97.1 overall detection rate was achieved, which is roughly a mid-table result – however the number of false positives was significantly lower than many other scanners. Combining these results means AV-Comparatives placed Kaspersky into the top 4 products, awarding an “Advanced +” mark (the highest possible). It is important to note that the detection rate alone is not the defining performance criteria (although still extremely important), as it is easy to mark any file as a virus when it is not. Looking through past performances, Kaspersky are consistently among the top performers each time a test is performance.

The e-mail virus scanning component works well and automatically plugs in to the main types of e-mail client. Not only are e-mails containing a virus detected, but also phising e-mails that try to fraudulently extort information using seemingly legitimate e-mails from large institutions: 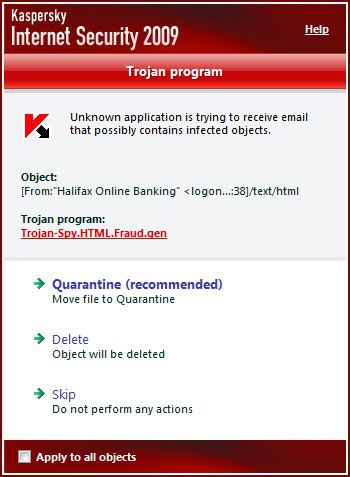 One excellent addition to KIS 2009 is Secunia vulnerability scanning. Although available as a separate free download, having this feature built in to the suite is a great preventative measure for computer users. When you perform a system scan, you will be notified of any applications which contain known vulnerabilities and need to be patched. Frequent offenders are Java, Adobe Reader and Flash, which are often used as methods to surreptitiously infect machines. To activate this type of scanning, enable “signature scan of vulnerabilities” in the manual scan options.

Firewall configuration and performance is very similar to the previous version, providing very robust protection against rogue applications. Not only are ports blocked (which the Windows firewall does reasonably well), but you have excellent control over the communications activity of every application on your PC. In simple mode, Kaspersky handles these requests itself and does not provide information popups unless a serious event occurs. However in advanced mode, you are prompted on how you wish to respond the first time an application makes a request to connect to a network or the internet. This gives much greater control than simple passive firewalls, and can alert you to any suspicious application activity. For example, you download an application from the internet which does not appear to contain a virus, but when you run it an alert pops up telling you that it is trying to send/receive some information to a remote IP address. Of course, this may not be anything to worry about – but if you weren’t expecting any network activity you can click on the “block” button to prevent that specific application from communication any data to a remote location: 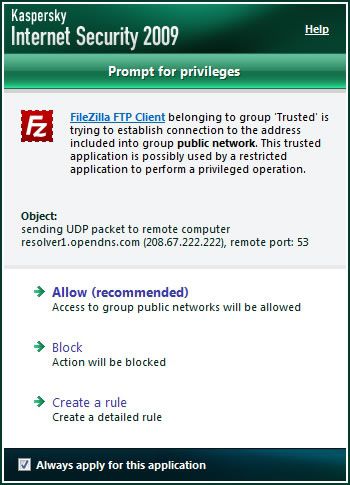 The Proactive defence tool is a very useful addition which alerts you to any possible suspicious behaviour, such as adding items to system startup or software that tries to change your homepage. There are many other components such as parental filters, anti-dialer and anti-phising tools that are integrated into the online browsing component of the software.

An anti-spam filter is included as part of the package, but this lacks many of the features that other commercial products include. Whilst adequate for home usage, some users may want to disable this component and either use an alternative or perform manual filtering. When tested on a high volume e-mail account (receiving around 300 e-mails per day, 90% of which are spam), there were a number of false positives even after a period of training. For a low volume account with conservative settings, it could be a useful tool.

KIS 2009 builds upon the success of previous versions to provide a user friendly and comprehensive security suite. As an all-in-one solution, it performs extremely well in the critical areas of anti-virus and firewall protection, whereas some of the extra features such as anti-spam are adequate as built-in components. At this price, KIS 2009 is an excellent all round protection option for home PCs, especially with the level of customisation possible for advanced users.

The resource usage is reasonably low for an active security suite, and there is little evidence of any slowdown during computer operation. Bootup times did increase slightly once installing KIS 2009, but that is to be expected with any similar package.

It is worth mentioning that most people will want to tweak the default KIS 2009 settings to make the most of the security package. There is an excellent guide on the official Kaspersky forums which explains how to customise each option: