IWill have released their CR620 6-in-1 USB 2.0 Card Reader as an update to their original USB 1.1 version of the product. The product is essentially the same, just slightly different construction differences, and a faster transfer potential. Each of the four slots can accommodate one (or possibly two) types of media format:
The sixth "format", implied in the 6-in-1 name, comes from using an IBM Microdrive - which is technically a small hard drive, but able to fit into a Compact Flash slot. 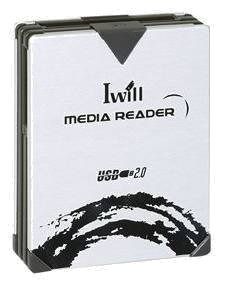 The IWill CR620​
The appearance of the CR620 is almost identical to that of the CR611 - the only difference being the strange pattern on the front of the unit. I have no idea what it is supposed to symbolise, and I personally think it would look better without it.​
Specifications
The IWill card reader also allows you to insert a card in each slot and copy between any of them, not all card readers will allow this, so it is worth bearing in mind if you will be performing this operation. The CF Type I/II and IBM Microdrive share the same Compact Flash slot, as do the Secure Digital and MultiMedia Cards. 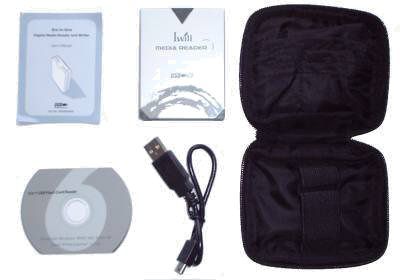 Contents of the CR620 Bundle​

IWill bundle the exact same items with the CR620 as they do with its predecessor - just with a slightly different design on the items. Photo Explorer SE Basic is again included on the driver CD, and will function as a simple photo viewing/editing application for photos from your digital camera. The carry case is ideal to add into your laptop bag, as it includes the cable/CD/reader to get everything up and running.​
The rear of the packaging however, shows a misleading graph titled "IWILL CD620 = Hi Bandwidth USB 2.0" seemingly showing the performance of the "IWILL CR620" against "Other Readers". The "Other Readers" score 40 and the IWill unit scores 480 (no units). This of course refers to theoretical transfer speeds of the USB 2.0 and 1.1 standards in Mbps - but it looks very misleading to the buyer - the unit will not perform 40 times faster!

Unlike the CR611, the new USB 2.0 version does not support Mac OS at all. This is surprising as MacOS does actually support the USB 2.0 standard. For the PC however, if you have a USB 1.1 port, the CR620 will revert back to working at the slower speeds.When I was almost finished the compatibility testing of the unit, I tried using it on a Gigabyte 8EIXP motherboard which supports USB 2.0 - the computer froze as soon as the unit was plugged in. It worked fine in 2 other USB 2.0 PC's, but the Gigabyte board would just freeze in Windows as soon as it was inserted. As this was only noticed in Windows XP on this board, it seems to be something incompatible already installed (although other USB 2.0 devices work fine).

Installation of the flash card reader is extremely simple and is fully USB plug and play. Under Windows ME/2000/XP you don't need a driver CD at all, just plug the card reader in and Windows will detect a "Mass Storage Device" 4 times (if you are using Windows 98, simply point the driver wizard to the driver CD that comes in the pouch). You will see that 4 new "removable drives" will appear:

Each one of the drives corresponds to one of the slots in the card reader, and the drive letters are assigned automatically by Windows (but these can be changed). IWill also include some software to assign an icon to each drive under Windows Explorer - this is just to let you know which drive is CF/MMC/MS/SM. Once the drivers are installed you can plug in the device when ever it it needed and the drivers will quickly load back up and allow the unit to be used in about 2 seconds.​
Conclusion​
This card reader is just really an upgrade in speed over the previous unit, and as such, it rates just as well. The USB 2.0 connection did yield some considerable speed increase over the previous version, which would make a big difference when using larger storage memory cards. Anyone dealing with professional digital cameras, or Pocket PCs a lot would probably find this a worthwhile upgrade. For a current user of a 1.1 card reader there will not be much point in upgrading, but for someone who is just about to buy one it would be worth while spending a couple of extra pounds in the long run to get a USB 2.0 version (even if you have a USB 1.1 port, but may upgrade in the future).
​
The unit itself looks very smart compared to the usual cheap plastic readers that are its main competitors - which look fine by themselves, but the IWill unit puts them to shame in comparison. The brushed aluminium front and back perfectly matches that of the Lian-Li cases, looking very elegant next to one. The CR620 is no more expensive than any other universal card reader available, but it looks better, performs well and has a smart carry case.​