Long gone are the days of expensive computing – this Windows 8.1 tablet costs around £75 (recently £50 on the MS Store), which is less than that of a standalone Windows 8.1 retail license. When I saw the HP Stream 7 on offer for £50, I couldn’t resist buying one, even though I already own a Surface Pro tablet. This particular model is the “signature edition”, which means that there are no bundled apps on the device – it’s essentially a clean install of Windows 8.1.

Windows 8/8.1 tablets haven’t taken off in the way that Android or Apple competitors have, but there has been a recent surge in low cost Windows 8.1 tablets which may tempt some people to try one out. At this price, the hardware is more powerful than you’ll see from competing platforms, but in return you’ll get a tablet that comes with a much more limited selection of tablet-based apps from the Windows Store. App support for mobile windows devices is far from as comprehensive as the Android or Apple app stores. However, you’ll be able to run standard windows software, which could be a huge advantage if you need to use specialist software or want a “full” computer to use on the go. 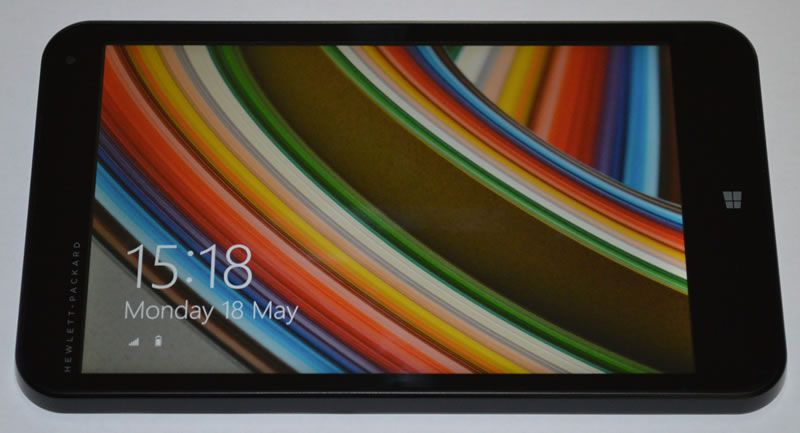 For such a low cost device, the hardware is surprisingly decent. You’ll get a quad-core CPU, 32GB of storage and an IPS touchscreen (1280x800). It’s not going to win any benchmark competitions, but it’ll happily power browsers and other non-intensive applications. The 1GB of memory is the real bottleneck, but what more can you expect for the price.

Specifications
In terms of connectivity, all of the essentials are there. Having a USB port is a massive advantage over some tablets, as almost all USB accessory hardware will work on a Windows platform. Only a micro-B USB 2.0 port is included (to save space), so you may need a cheap adaptor to plug in some devices if they require the larger USB-A port that some PC peripherals use. Sadly there is no mini-HDMI port, which would have opened up a lot of interesting possibilities. 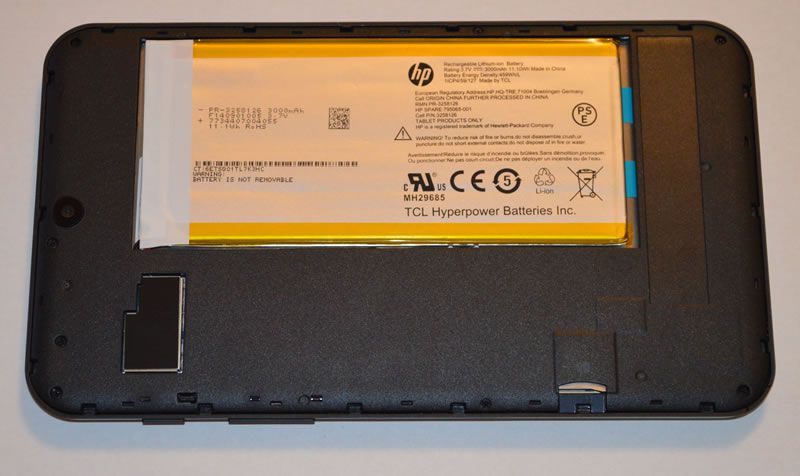 Rear of the HP Stream 7, complete with battery and microSD slot​
The Stream 7 weighs around 363g and feels a little heavy and thicker than other tablets this size, but quite manageable to hold in one hand and use with the other. Although the front touchscreen seems to show fingerprints in the same way that most other touchscreen devices do, the rear plastic case shows them more easily than you’d like. The button and port placement seems logical, with the exception of the microSD slot which is accessed underneath the rear cover. It would have been nice to see a side slot for this, but perhaps the reasoning is that most users will immediately expand the storage (as SD cards are relatively cheap) and will want to avoid the risk of losing the card by knocking the side of the unit.

The IPS panel used in the Stream 7 is surprisingly bright and we experienced no problems with viewing angles or responsiveness to multitouch gestures. With a 1280x800 resolution there is plenty of rendering space to browse and read at sensible scaling levels.

When using apps from the Windows app store, performance was swift and responsive – even with several tabs open in Internet Explorer. Multitasking with traditional windows applications is another matter, as things quickly slowed down, as you may expect with only 1GB ram.

To fully benchmark this device, we’ve run the popular “PC Mark 8” suite. Although this is only a tablet, being able to run a full version of Windows 8.1 is a huge advantage when it comes to running applications like this – so it seems prudent to run it, so that you can compare to your desktop/laptop!

The Stream 7 scored 1027 on the Home accelerated 3.0 benchmark, a figure which you can compare to almost any other hardware configuration using the Futuremark website (http://www.3dmark.com/search). Synthetic benchmarks are of minimal use for a tablet like this, however it is useful to provide this information to readers should you wish to compare expected performance to your existing hardware. 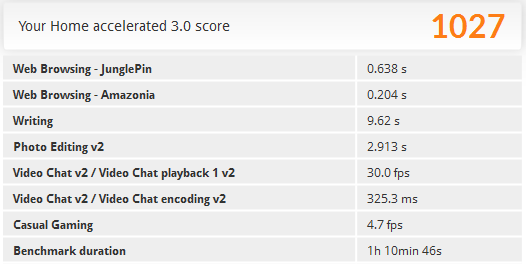 Of more interest is the graph of how the Intel Z3735G responds to the CPU load during the testing. One of the benefits of this low powered CPU is that it will adjust the default clock speed (1.33Ghz) to reduce power consumption when not needed, but it can also provide short bursts of power by upping the clock to 1.8Ghz if there is intensive work to be done. Throttling the CPU in this way will save power and prolong the battery life when you’re using the tablet: 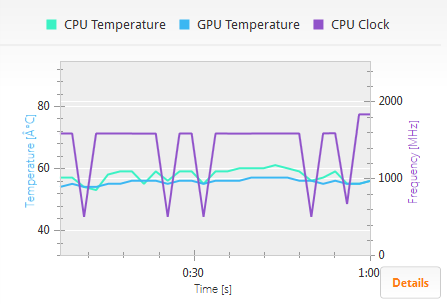 The 0.3 front facing and 2MP rear facing cameras are functional, as in good enough to use for Skype and other similar services, but you won’t be using this as a first choice camera by any means (there isn’t an LED flash either).

If you’ve got a Miracast enabled TV (or perhaps the Microsoft Wireless Display adaptor) then you can wirelessly stream the display and sound from this tablet. We used the Microsoft adaptor to mirror the screen of the Stream 7, which worked without any hint of a delay. I can strongly recommend using this solution if you’re thinking about using your TV to browse the web or play YouTube videos. It’s not as simple as using something like a Chromecast, but it’s far more powerful.

We noticed that when using the 3.5mm audio jack, there is a constant buzzing sound through the headphones. When using the touchscreen the noise increases momentarily, so we can only assume that the sound is feedback induced from somewhere inside the device. It looks like many other users have had this same problem, so it doesn’t look like this is isolated to our review unit. The noise is irritating enough that it would prevent me from using it with headphones unless absolutely necessary.

When using the tablet intensively (a repeat benchmark with a mixture of watching videos, video editing, browsing the web and casual gaming) the battery run time was approximately 3h 42m. This should be the worst battery life you could reasonably expect.

During more typical, lighter usage, we experienced a battery life of around 5 hours. Although this isn’t anywhere near as high as competing tablets, this device is substantially cheaper.

I’m still not convinced that Windows 8.1 makes much sense on a tablet of this size, as there isn’t a broad range of mobile-friendly applications available in the app store, yet using a full version of Windows on a 7” screen is quite cumbersome. As attractive as the hardware (3.5mm audio jack issues aside) and pricing may be, it may only be suited to consumers that have a specific need for a low-cost Windows tablet. In terms of ease of use and app availability (very important to most tablet users), it can’t compete with Android or Apple devices. However, if you are aware of these limitations, this a potentially very powerful device for the money.

Later on this year, you’ll be able to upgrade this tablet to Windows 10 for free – which may improve the user experience significantly, as there will be big Windows Store changes coming at the same time.

Windows 8.1 aside, the tablet offers a well-balanced bit of hardware for a <£75 tablet. It’s a full, very usable x86 device that offers tremendous flexibility in a very compact form factor. It’s hard to make criticisms of the device when it comes to performance, as once you start to add extra RAM and other improvements then you’re looking at buying a product aimed a totally different market. If, like me, you’re after an inexpensive way of running full Windows apps on the move then this is a good solution.