The ESens optical mouse is one of the many new optical mouse devices to hit the market in recent months after domination from Microsoft and Logitech in this market. Optical mice are sharp becoming standard, and no-doubt roller ball mice will soon be phased out. It is safe to say that an optical mouse holds many advantages over its mechanical based counterpart, mainly being the lack of cleaning, much less wear and tear and accuracy. 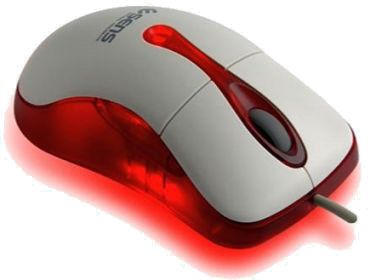 The ESens Mouse​
The mouse looks similar to some mice in the Microsoft optical range, and comes with almost identical features - but with one crucial difference, the ESens mouse retails for less than most traditional mice cost. The semi-transparent bottom casing lights up with a pleasing red glow whenever the mouse is powered, and then more intensely when the mouse is in use.​
Specifications
The "Internet Navigation" keys are simply the 4th/5th keys located either side of the mouse, which function as "forward" and "back" buttons in the Windows GUI and most browsers.

Included Items
Not much is included in the package, but then again this is a mouse where instructions aren't really necessary. Drivers for the mouse are only needed if you are using Windows 95 and wish to use the internet navigation buttons, these are not included with the mouse but are available for download of the ESens website (fair enough as they are internet navigation keys!).

The Introduction sheet is a single sided A5 piece of paper with a features, characteristics, requirements and overview listings - but no real information to it other than a small note stating compatibilities. The Introduction sheet does however count as evidence of purchase for a five year guarantee.

Installing the mouse is as easy as installing hardware gets. If you have Windows 98 or above you can simply plug in the USB device and use it within a couple of seconds - no driver installations or dialog boxes to follow. On the other hand, if you have Windows 95 you must download a small driver package to take advantage of the 4th/5th forward/back buttons - you must also use the PS/2 connection as Windows 95 does not support USB properly out of the box.

The bottom of the mouse is the same basic semi-transparent red colour, but with a small silver ring with the serial number and other details marked onto it. The Optical sensor is located in the middle of the silver ring, and is embossed in a keyhole style area. There are also four Teflon coated pads in each corner of the mouse, which give for fluid movement on most surfaces.​ 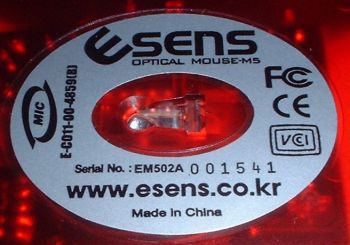 The top of the mouse is made from High Impact Polystyrene or something similar, as it is hardwearing and reasonably scratch resistant. This is just the same as any other mouse available, just in a cream / semi-transparent red colour. The two main buttons are fairly large and have the micro switches located in the middle of the button, which responds to clicking anywhere on the button surface and doesn't become harder to depress round the edges.​
Performance


I've been using this mouse as my main choice for the past month, I've been able to assess the performance compared to my Logitech ball mouse and my Trust Optical Wireless mouse.​
The motion of the mouse is the most fluid of all three, but it seems to lack in acceleration of the pointer (i.e it takes a longer distance to translate the pointer from one corner to the other). When upping the speed of the mouse under control panel, the speed could be brought up to that of the Logitech and Trust mouse - although this is not a fault, simply a default configuration. The mouse clocks in at 125Hz in "Mouse Rate", although this is the standard Windows USB sampling rate.

In high speed gaming, the ESens mouse proved better accuracy than the Logitech ball mouse and the optical trust mouse - this was to be expected, but it was confirmed during playing of some fast paced FPS's.

The ESens scroll wheel felt the best, and gave the most satisfying click when turning the wheel - but it does seem to have more clicks per complete revolution (about twice as many as the Trust mouse, and a little more than the Logitech mouse). This is nothing special, but it was more useful for scrolling down a whole page with only one movement of the finger.

This mouse performs extremely well, and considering its price it is an extremely attractive alternative to some of the more expensive offerings out there. The ESens mouse isn't feature packed, but it incorporates all of the expected features such as a scroll wheel, and does have a good optical system.

A comfortable ambidextrous design makes this ideal for a system where multiple users will be using the same system on a regular basis - its simple and symmetrical, so you can't really go wrong with the design. For the price this is an good buy, but feature hungry gamers may want to look elsewhere.