This years European Computer Trade Show has come to a close, showcasing some of the up and coming products that will be appearing on shelves over the next year. Between the 1st-3rd of September 2004, developers, manufacturers, press and publishers all meet up in Earls Court to showcase and browse the latest gaming products. Ian and Matt both attended ECTS to see what they could find out.

The event is trade only, but dwindling numbers no doubt led to many members of the public being invited anyway. This years ECTS was the smallest yet, and 2 hours was plenty of time for people to get a glimpse of what was on offer. Luckily, there were several exciting products that caught our eye - and a chance to play against the "best gamer in the world" at a special ABit arena in Leicester Square in London.

Some of the main exhibitors included:

The S3 stand was one of the most interesting booths of the day, and PC Review managed to get a chat with Nadeem (the Product Manager for North America and Europe). Nadeem demonstrated the new OmniChrome S4 which is due for release later this year. The card has similar specifications and claimed performance of the ATI 9600 AIW, but with a price tag similar to the ATI 9200. 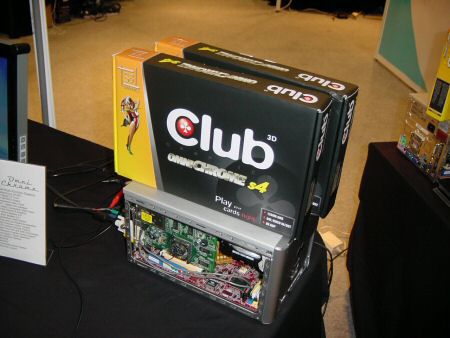 We reported the launch of the Deltachrome last year in a separate article, which will have a few interesting figures in it. The main selling point of the card will no doubt be the TV tuning capabilities, which comes with an impressive "Windows Media Centre" clone. This will be ideal for a SFF PC, which could be used as a TIVO box and a mini game station.​
This is a product worth keeping an eye on, as S3 are aiming for a mid-low range performance graphics card with some extra features at a very attractive price. Expect a review of this card once review samples are rolled out.​ 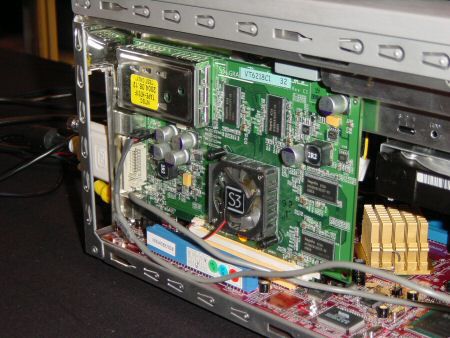 Microsoft had a very large and quite daunting presence in the centre of the arena, with a large sectioned off room for meetings with developers and presentations on the future of DirectX. 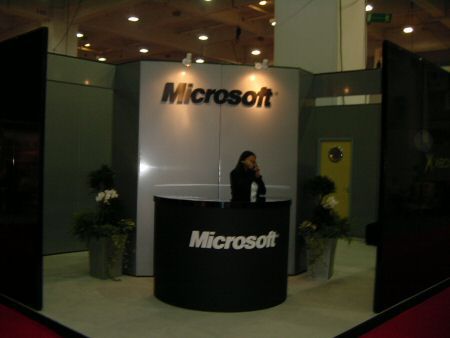 Matt came up with the chat-up line of the day, moments before this photograph. Asking the Microsoft Lady if it was acceptable to "take a photograph", with a shocked response of "what!? me!?", only to be replied with "don't be silly, of the Microsoft entrance".​ 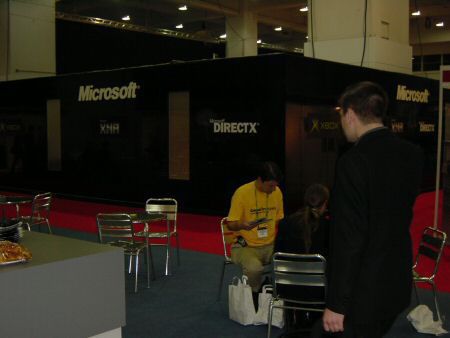 DirectX 9c appears to be the last we will hear of this gaming platform, as Microsoft make the transition to WGF (Windows Graphic Foundation). Windows Longhorn will be heavily reliant on WGF, running Avalon as a GUI over the WGF APIs. This will allow the Windows desktop to be rendered using 3D graphics processing as opposed to the current 2D bit-blitting.​
Although DirectX 10 still appears on roadmaps, it will first appear as WGF in Longhorn (current release rumors are around 2006).​
SphereX​
One of the more prominent displays in the arena had to be SphereX's sound booth. Although the display was obviously aimed at the Xbox console, it was a demonstration that could not be missed.​ 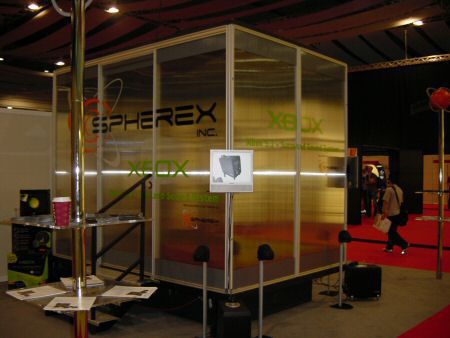 After talking to Alex Romanov about the commercial aspects of the system and the expected RRP (£399), the demonstration of the speaker system began. A clip from XMen 2 was played on a plasma TV with the SphereX 5.1 System handling the audio. All 5 of the listeners inside the booth were impressed with the audio quality and the immersion.​ 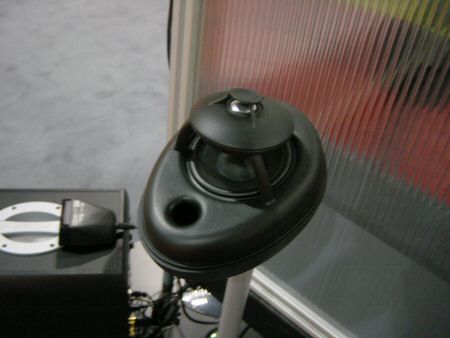 After enquiring about the technical aspects of the system, the system works on an omnipolar sound system - meaning that the whole room becomes a "sweet spot" with the satellites quite flexible in position. As the sound was directed not only at the listeners, but also bouncing off walls and then back to the listeners, music sounded like a live performance.​
The unit has optical, USB and expansion connections - and there are plans for a hard drive expansion and possibly a network card in the future.​ 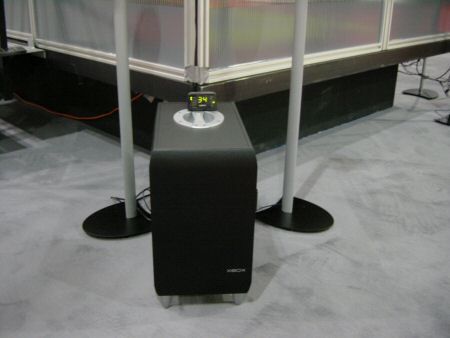 Luckily, the unit can be connected to a TV/PC/PS2 and almost any other audio output device. PC Review will hopefully have a review of this speaker system from a PC perspective for a high-end gaming machine.​
Samsung and WCG 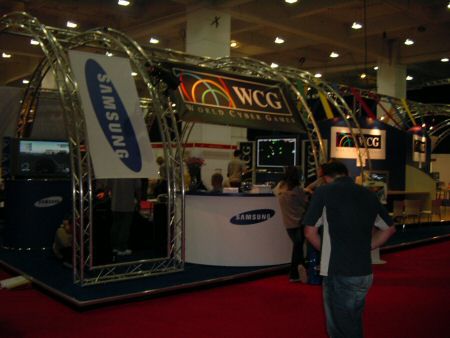 Upon entering Earls Court, there was a huge Samsung stand dedicated to "World Cyber Games" and a range of its LCD panels. The WCG in the centre stage seemed to consist of several players playing asteroids ALL day and not many passers paying too much attention. Presumably there was a climax to this particular micro-event earlier on in ECTS, and it was now winding down.​ 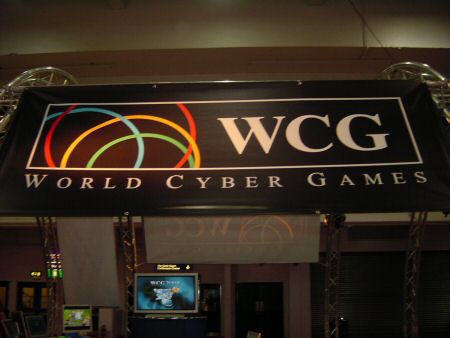 Perhaps if Samsung had made a more proactive display, it would have been a bit more interesting. There were however, fully stocked press packs and a look at Samsungs future LCD monitors - which were impressive.​
Other Displays​
There were many more booths at ECTS, including a press lounge and developer area (which was sponsored by AMD). These we mainly social networking hubs for developers and the press to mingle and discuss business ideas.​
As always, there were smaller game and software developers showcasing their new titles, most of which seemed very uninteresting (certainly not many blockbuster titles).​ 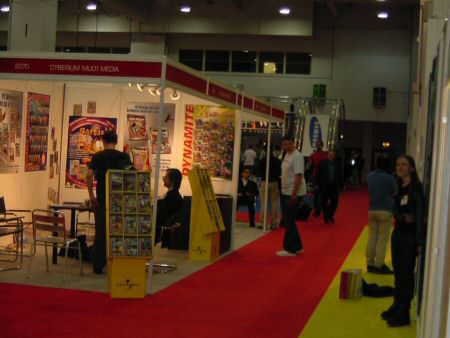 One of the last attractions on the walk through the booths had to be the "actionstick", a game expansion which allows players to move the hands and legs in punching or kicking movements, which replicates the appropriate movement in-game.​ 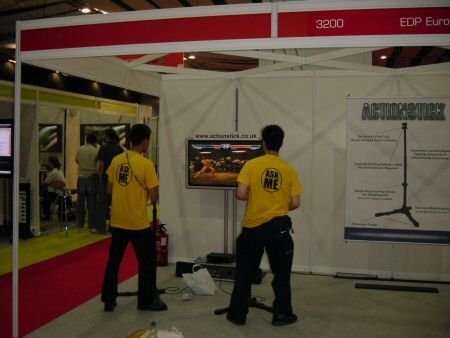